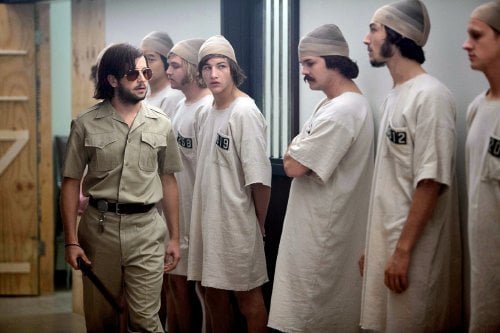 During six days, from 14-20 August 1971, Stanford University psychology professor Phillip Zimbardo (Billy Crudup) and his team of research assistants began a study funded by the US Office of Naval Research on the cause and conflict between military guards and their prisoners. The study, using students hired for $15/day, put them in a mock prison environment that would become “The Stanford Prison Experiment.”

Director Kyle Patrick Alvarez and writer Tim Talbot create an honest and accurate depiction of a psychological experiment that goes terribly wrong. This may be a plot line that a fiction thriller would use but “The Stanford Prison Experiment” is real life. I remember studying the experiment in Psychology 101 in college and my reaction: how can people change so abruptly and, often, sadistically, in such a short time? The film, and the experiment, does not answer that question satisfactorily. This, I believe, is due to the involvement of Zimbardo in the actual experiment. Instead of standing apart from the study, the scientist took on the role of prison superintendant and participant, not observer, in the experiment. Without a control group, the study takes on the air of chaos with prisoners revolting against the guards, guards abusing their prisoners, sometimes physically without checks and balances enforced. This must be fiction, right? The conclusions made by Phillip Zimbardo after his experiment – the bad behavior by the “prison guards” is based on environmental situation, not individual personality traits – have an awful lot of similarity to the prison guards’ cruelty that took place at Abu Ghraib prison in 2004. Was the guards’ behavior at Abu Ghraib the product of environment or just “a few bad apples” unfortunately assigned to where their sadism could flower? If it is the former, then why was it allowed to happen unsupervised? Zimbardo’s study asks more questions than it answers. Looking back into the original experiment, I found that the filmmakers adhere to the details of the factual story, virtually without the embellishment of literary license. This makes “The Stanford Prison Experiment” a genuine docudrama that does not need to inject fiction into this incredibly shocking real-life story.