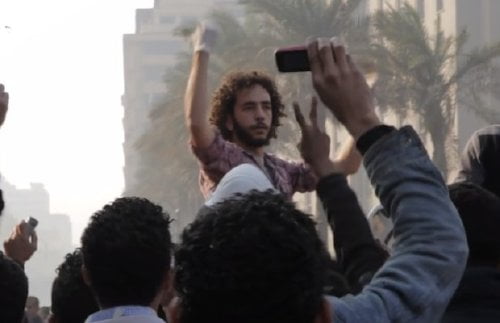 For 30 years, President Hosni Mubarak ruled Egypt under the long standing emergency laws. By 25 January 2011, the Egyptian people, tired of his iron-fisted rule of their country, staged the Day of Protest and began the process that would end the Mubarek rule and bring about democratic elections These days of anger and hope are told through the eyes of six of the protesters who were present in “The Square.”

This well-made documentary by Cairo-born Jehane Noujaim focuses on six of the protesters that helped, with tens of thousands of others, lead Egypt to the hoped for democratic elections. The tumultuous times, the protests, the military interventions are shown in parallel with interviews with the optimistic six, all young and dedicated to the Egypt’s Arab Spring. Shot over a period of two years, “The Square” (referring to Tahrir Square, the epicenter of the revolutionary will of the people) is a solid documentary about the making of a revolution that would change the very fabric of Egyptian politics. Things did not turn out as was hoped by the people of that country but, as the documentary makes clear, there is a new-found spirit of revolution that, as recent events have shown, is still alive. “The Square” is a well-structured and researched work that is a must for anyone interested in world events (or regularly watches BBC World News). Jehane Noujaim started her documentary career in 2001, co-directing “Startup.com.” Her latest work shows maturity as a documentary filmmaker and she does was a docu-maker is supposed to: interest and educate.