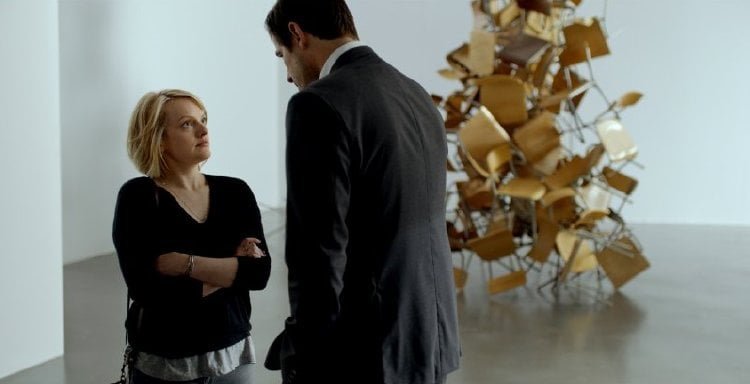 Christian (Claes Bang) is the curator at the prestigious X-Royal Museum in Stockholm. He is in the midst of the installation of a controversial concept art piece, must deal with a pair of out of control publicists and he gets his wallet and phone stolen by a crafty pickpocket. All the chaos in his life distracts him from his job to promote “The Square.”

Handsome, divorced father of two Christian (Claes Bang) leads a charmed life as the director of a contemporary art museum in Stockholm. He is excited about an upcoming exhibition promoting societal responsibility to others, but the theft of his cell phone leads him down a morally dubious path and the PR firm he hires makes an incendiary video that gets the desired results in a way that dooms the man hooking his future success on "The Square." Writer/director Ruben Östlund's ("Force Majeure") 2017 Cannes Palme d'Or winner is a witty, if somewhat obvious, art world set satire examining the 'bystander effect,' humankind's willingness to help a stranger in need decreasing the larger the crowd is. Bang is perfection in the lead role, projecting the type of shallow, pandering warmth artistic fundraisers are known for, a privileged liberal convinced of his own goodness until it's put to the test. The man is a twit, yet Bang ensures we feel no pleasure in his downfall. Christian's work days consist of little in the way of labor, spending his days on ceremonial duties and meetings. When interviewed by American journalist Anne (Elisabeth Moss), who asks for an explanation of some museum website content, he cannot get his head around his own bullshit, struggling to answer. He practices his 'spontaneous' break from a written speech in the bathroom before announcing to those assembled that 'The Square is a sanctuary of trust and caring. Within it we all share equal rights and obligations.' Yet as work proceeds on delineating this square of pavement outside the museum's entrance, Christian shrinks along with others in aiding a woman screaming for help. Another man asks him to assist in stopping the enraged male following her. They succeed and Christian exults in the adrenaline rush, yet on a daily basis he ignores the charitable worker asking people if they wish to save a human life. Once in his office, he realizes his cell phone, wallet and cuff links have been stolen. His IT guy, Michael (Christopher Læssø), tracks the phone to an apartment building in an area of the city Christian rarely enters. Michael has an idea and Christian enlists him to carry it out, but once there, Michael refuses and so it is Christian who delivers anonymous threatening letters to every apartment calling its inhabitants thieves and demanding the return of his things at a local 7-Eleven. Östlund based his film on a real 2014 show at Sweden's Vandalorum Museum, including The Square and its corresponding Trust/Mistrust exhibit. The art itself is comical, a Gojibi exhibit nothing but artfully mounded piles of pebbles, undone one evening by a sweeper, another of piled chairs featuring a recording of them all crashing down which thwarts Anne's confrontation of Christian. His treatment of her is but one of the ways Östlund mercilessly skewers his protagonist, his refusal to hand over his used condom showcasing his extreme mistrust of others. We witness a guest artist, Julian (Dominic West, TV's 'The Affair'), being interviewed as his audience twists itself in knots trying to accommodate the profane exclamations of a Tourette's sufferer. The film's main set piece reiterates the filmmaker's points at a gala evening museum affair. Christian announces 'The Jungle,' warning that a wild animal will attack if it smells fear, perhaps ignoring those who 'stay still within the herd.' A performer named Oleg (Terry Notary, "War for the Planet of the Apes," phenomenal) enters, the man's apelike movements, gestures and guttural noises unsettling all, few helping those he hones in on with the exception of alpha males attempting to protect their women. The repercussions of Christian's letters arrive in the form of a young boy whose life has been made miserable by his accusations. Christian does not handle the situation well. But it that crazy video that the PR firm releases that brings everything to a head, public outrage demanding Christian's head. His subsequent press conference is a witty takedown the media's collusion in public outrage. And then there's that chimpanzee living in Anne's apartment uncommented upon, perhaps the film's most natural artist. Given its modern art setting, the film's production design is all clean modernism. But every building Christian enters, new or old, features square, spiraling staircases, architectural art leading into an abyss. Grade:

This is a departure from writer/director Ruben Ostlund who last brought us “Force Majeure (2014), a family drama about a man, in a time of great danger, who abandons his family to save himself and the cost he bears for that betrayal. “The Square” is anything but dramatic with its mirthful examinations of privilege and poverty as seen through Christian’s eyes. There are several story “threads” running through “The Square” with its examination of the homeless in Sweden – forgotten people; the state of “art” – the titular Square is one and small piles of gravel in an empty room is another – and the ramifications of a bad decision by Christian as he searches for the wallet thief – to humorous ends. There are, as said, a number of story paths to “The Square” and do not try to make sense of some. Christian has a strange one night stand with an American journalist (Elizabeth Moss) who is obsessed with keeping his used condom and lives with a chimpanzee. As I said, do not try to figure it all out. Some of the story lines work better than others but there is one scene that is mesmerizingly striking to watch involving a performance piece with a man-ape (Terry Notary) that needs to be seen to be appreciated. “The Square” has highs and lows, making it sometimes intriguing and sometimes head scratching.