The SpongeBob Movie: Sponge Out of Water 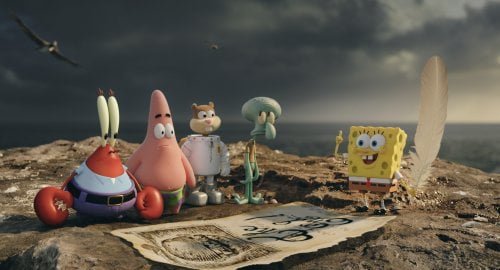 SpongeBob and his friends are back with their second feature film. This time, a diabolical pirate, Burger Beard (Antonio Banderas), plots, and succeeds, to steal the secret recipe for the Bikini Bottom favorite, the Krabby Patty. The underwater denizens must team together to get the recipe back, and divert disaster, in “The SpongeBob Movie: Sponge Out of Water.”

Burger-Beard (Antonio Banderas) the Pirate goes to great lengths to steal a book from a booby trapped skeleton. As he reads the tale to the demanding gulls which land on his vessel, he eventually becomes its ultimate villain as the denizens of Bikini Bottom go mad when the secret recipe for Krabby Patties disappears. Joining unlikely forces with the Chum Bucket's Plankton (voice of Mr. Lawrence), who set the apocalyptic disaster in motion, SpongeBob SquarePants (voice of Tom Kenny) and his friends will go to any lengths to get it back - including into the real world - in "The SpongeBob Movie: Sponge Out of Water." Over ten years since Plankton last stirred up Bikini Bottom, the gang returns for another of their food based adventures in one of animation's most singular and long running series. Mixing live action with animation, this time out the filmmakers also actualize SpongeBob and his friends in 3D CGI as they interact on land first with beach goers, then as their superhero iterations in a battle against Burger-Beard. Along the way Bikini Bottom goes all "Mad Max," Plankton gets a look at the inside of SpongeBob's brain (complete with popsicle twins right out of "The Shining"), SpongeBob uses Plankton's computer Karen (voice of Jill Talley) and a little teamwork at Taco Haus to build a time machine and 'hitchhike' through the galaxy, encountering Bubbles, the dolphin who 'watches' all from its intergalactic spaceship. After the Burger-Beard prologue, "Kung Fu Panda" screenwriters Glenn Berger & Jonathan Aibel (from a story by series creator Stephen Hillenburg and Tibbitt) plunge us beneath the sea where a food fight is ongoing on a massive scale between the invading Plankton and SpongeBob, defending against an onslaught of tartar sauce and pickle bombs with his stalwart buddy Patrick (voice of Bill Fagerbakke) at his side. Plankton's bomber salvo is just the first step in his mission and, utilizing a robotic decoy, he makes his way into Mr. Krabs's (voice of Clancy Brown) safe where he plans on switching the Krusty Krab's secret recipe with a nyah-nyah note. But SpongeBob realizes what's afoot and as they scuffle, the recipe-in-a-bottle vanishes from both their hands. Teamwork is the theme here, but the SpongeBob team wouldn't dream of preaching, instead pushing imaginations to their limits. Director Paul Tibbitt (TV's 'SpongeBob SquarePants') keeps the whole seamlessly segueing from one style of animation to the next until SpongeBob and Co. are trying to roll a 'giant hairy porpoise' (a male sunbather) back into the ocean and taking a trip inside a cotton candy machine. The gang's super hero incarnations all play upon their individual loves, so bubbles, ice cream and Squidward's (voice of Rodger Bumpass) music all come into play for a final rap duel. Banderas seems to be having a ball. You will too. Grade:

This second entry in the SpongeBob franchise should please the fans, especially the kids (though there are a lot of adult fans, too), with its bright colors and silly hijinks of SpongeBob, Plankton, Mr. Krabs, Squidwad Tentacles, Patrick Star and the rest. Their adventure begins with the theft of the Krabby Patty recipe. The loss creates havoc and destruction for the inhabitants of Bikini Bottom and the rescue team must go to the surface to complete their mission and save their home. The humor in “Sponge Out of Water” is just what the fans (of all ages) expect and varies from the base, Squidwad inking himself and SpongeBob and Patrick Star sugar-rushing on cotton candy, to more mature with references to “The Shining” and “The Road Warrior.” Like the first SpongeBob movie, the filmmakers mix animation with live action as our heroes leave the safety of the water to go to the surface to foil Burger Beard’s plans of a Krabby Patty empire. All the vocal talent from the first SpongeBob movie returns to give voice to their much loved characters. Antonio Banderas camps it up as Burger Beard and seems to be having good fun, particularly his verbal sparring with seagulls, voiced, in part, by Tim Conway, Eddie Deezen and Rob Paulsen. “The SpongeBob Movie: Sponge Out of Water” is a labor of love by all involved and for those that have been with the franchise since it made its first appearance on the Nickelodeon channel way back in 1999.