The Spongebob Movie: Sponge on the Run 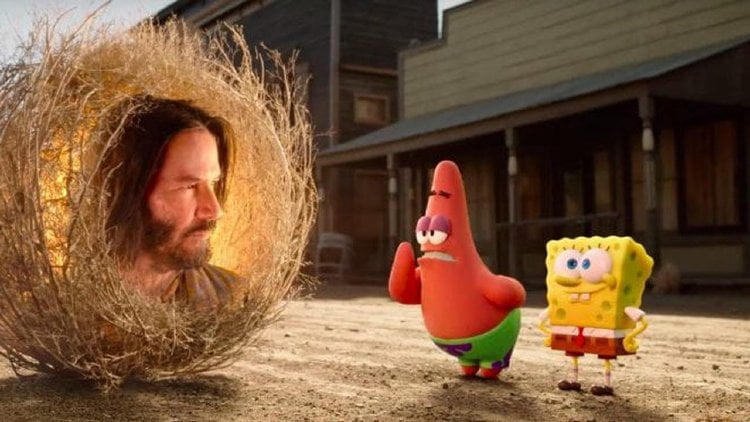 When Poseidon (voice of Matt Berry) is informed by his Chancellor (voice of Reggi Watts) that there are no snails left for his skin care routine, his rage will reverberate all the way to Bikini Bottom where Spongebob (voice of Tom Kenny) will arrive home to discover that his beloved pet snail Gary is missing.  Patrick (voice of Bill Fagerbakke) agrees to head off to The Lost City of Atlantic City with his good pal in a speedboat driven by Sandy’s (voice of Carolyn Lawrence) latest creation Otto (voice of Awkwafina) where they might face death attempting to rescue Gary in “The Spongebob Movie: Sponge on the Run.”

Picking up for the late creator of Spongebob, Stephen Hillenburg, who is listed here as executive producer, writer/director Tim Hill ("The War with Grandpa"), who wrote the screenplay for the first two films, delivers the wildest of Spongebob’s big screen outings yet.  This road trip adventure sees Spongebob and Patrick facing off against blood sucking cowboy vampires led by El Diablo (Danny Trejo) as well as Otto’s hair-raising need for speed all while being advised by a tumbleweed, Sage (Keanu Reeves), who goes along for the ride.  Meanwhile, back in Bikini Bottom, Mr. Krabs (voice of Clancy Brown) and Squidward (voice of Rodger Bumpass) learn the value of Spongebob in his absence.  Even Chum Bucket's Plankton (voice of Mr. Lawrence) finds no joy in finally obtaining the secret recipe for Krabby Patties.

Hill shepherd’s the franchise’s most eye-catching outing to date, with varying animation styles which, while still suggesting influences like Looney Tunes and ‘Ren & Stimpy,’ have evolved.  “On the Run,” therefore, lands somewhere in between the first movie’s hand drawn animation and the second’s which brought computer generated characters into a live action world and this is all for the better.  Hill’s screenplay is classic Spongebob, the optimistic sponge’s value coming to the forefront even as he blunders, going off script despite Sage’s warnings.  It’s also a laugh a minute, the film only bogging down during two musical numbers (sorry Snoop Dogg, but your part should have been excised entirely).  Sight gags abound (watch for Sage’s surprise appearance in a rear view mirror).  The veteran vocal cast is in top form.

Really, what more do you need to know than Keanu Reeves has been cast as a tumbleweed?  As usual recreational enhancement may increase your enjoyment, but even without, “The Spongebob Movie: Sponge on the Run” is the franchise capper.

The vain and powerful King Poseidon (Matt Berry) needs sea snail slime to keep his youthful good looks. But, he has exhausted his slime supply and issues a royal decree to find a new source. It so happens that our good friend and favorite hero SpongeBob’s (Tom Kenny) best and favorite pet, Gary, is a snail and a palace plot is afoot in “The SpongeBob Movie: Sponge on the Run.”

This thoughtful homage to SpongeBob creator, Stephen Hillenberg (who passed in 2018), is, like its predecessors, a goofy and wicked fun time. But it is more than that. It is an adventure tale, a buddy road flick, a yarn of palace intrigue, a race against time and a story of revenge, rescue and redemption. That is a lot to stuff into 91 minutes and the filmmakers do it with humor and, dare I say, charm and style.

As expected, we meet again all the denizens of Bikini Bottom. Of course, we have  SB and Gary, Patrick Star (Bill Fagerbakke), grumpy Squidward (Rodger Bumpass), Mr. Krab (Clancy Brown), the conniving Plankton (Mr. Lawrence). Sandy the Squirrel (Carolyn Lawrence) and all of their hi-jinks. We also get a bevy of new characters with Danny Trejo as El Diablo, Awkafina as driving robot Otto, Jill Talley as Karen the Computer and, my favorite, Keanu Reeves as Sage the tumbleweed, SpongeBob’s wise (is that why he’s called Sage?) guru and the voice of reason.

“Sponge on the Run” is all the things I said above, and more. There is lots of stuff to entertain the adults and make them laugh, but the same can be said for the kids out there. Farting fish anyone?

Available to Stream on Paramount+ and on Premium Video-On-Demand in the U.S. on March 4, 2021.