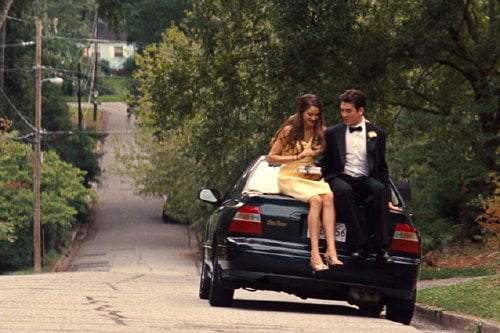 Sutter Keely (Miles Teller, "Rabbit Hole," "Project X") is mulling over a college entry essay about how a challenge in life shaped him. He answers flippantly about the girlfriend who just dumped him, their pairing always the life of the party. But it's the new girl he meets when she wakens him from a drunken stupor on her front lawn at 6 a.m. who will be the catalyst for real change in "The Spectacular Now."

Shailene Woodley is that new, unassuming girl Aimee Finicky, a quiet, unflashy type who can walk high school corridors largely unnoticed. She already broke out in "The Descendants," but she's even better here, her simple beauty and kindness slowly blossoming for the audience as it does for Sutter. But it's Miles Teller who completely owns this film as an alcoholic teenager destined to stumble along the same path as his deadbeat dad (Kyle Chandler, "Super 8"), a man he hasn't seen since childhood and who's he's built into a mythic figure in the intervening years. These two young actors won an a Special Jury prize at Sundance and if there's any justice they'll be showered with many more accolades before year's end. Everything about this film is special, director James Ponsoldt ("Smashed") pitching the material so acutely (adapted from Tim Tharp's novel by the "(500) Days of Summer" screenwriting team of Scott Neustadter & Michael H. Weber) that he's able to bring us to the brink of tragedy and pull back into an ending full of open-hearted hope. Aimee's up and about early to complete her mother's paper route (the strange demands of Aimee's mom, unseen, are never explained, leaving an oddly pleasant itch), so Sutter suggests he help as a means to finding his car. The two have an easy give and take, although Aimee's clearly buzzed by the attention. Sutter asks her to accompany him to a party, even though he clearly hopes to hook back up with Cassidy (Brie Larson, Showtime's 'United States of Tara,' "21 Jump Street"). When his buddy Ricky (Masam Holden) suggests Aimee's a strange rebound, Sutter explains he's just 'trying to help her out.' At the outdoor gathering, Cassidy clearly hopes to steal Sutter's attention, but as soon as she does, leaves with Marcus (Dayo Okeniyi, "The Hunger Games"). Sutter takes Aimee for a walk, introducing her to the contents of his ever present flask, and, with a different buzz of his own, impulsively asks her to prom. Here's the thing about Sutter - he's a genuinely decent guy, so when he avoids Aimee after this and is confronted by her best friend Krystal (Kaitlyn Dever, TV's 'Last Man Standing'), he immediately sets things to right again, heading over and asking her to a dinner party at his sister Holly's (Mary Elizabeth Winstead, "Smashed") where Aimee clearly makes a good impression with the slightly older crowd. A pact is made between the two that Sutter will demand his father's phone number from his mother if Aimee stands up to hers about her college dreams and this pact will set them both on the right path after a few disastrous diversions. While at heart a teenage romance, and one of the best ever committed to celluloid (it was shot on 35 mm), one of the great things about "The Spectacular Now" is that we observe Sutter in all the aspects of his life. His mother (Jennifer Jason Leigh, "Margot at the Wedding"), a hard-working nurse, isn't around much (but knows her son better than he knows himself); his math teacher (Andre Royo, "The Collection") is frustrated with his inability to pull the boy out of his self-destructive rut and his boss, Stan (Bob Odenkirk, "Tim and Eric's Billion Dollar Movie"), recognizes both the drinking problem and the charm that lures customers (Stan's menswear shop is the most amazing throwback). Much like Aimee's mysteriously suffocating mom, Sutter's sister Holly is introduced as a conservative, upwardly mobile wife with nothing in the way of explanation as to how she forged such a different path from her mother and brother, but Winstead and Teller create the true connection of shared experience. The film's third act is like watching a car wreck and we very nearly get one. Chandler plays a very different type of dad that we've experienced in 'Friday Night Lights' or "Super 8," but it's one we can recognize. With misguided nobility, Sutter pushes Aimee away. Later when we expect his mom to berate him, instead she saves him with words of palpable love.