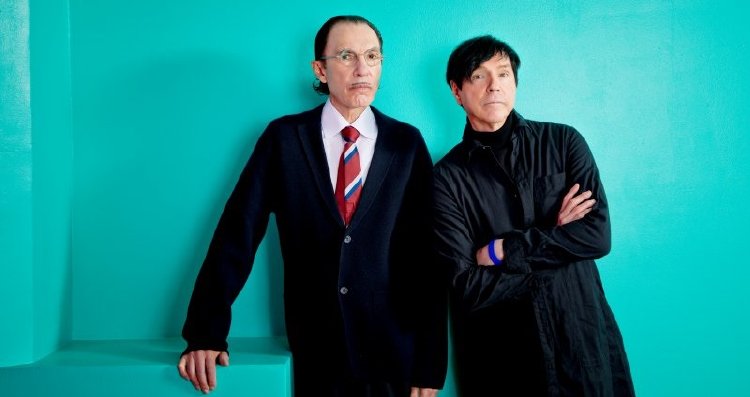 In 1971, Californian brothers Russ and Ron Maels' unusual musical output caught the attention of Todd Rundgren via Miss Christine, a girlfriend he had in common with Russ.  He produced their first self-titled album, ‘Halfnelson,’ but when it failed the record company suggested repackaging it, along with the band’s name.  The group known through twenty-four subsequent albums as Sparks groan when director Edgar Wright (the Cornetto trilogy, "Baby Driver") suggests he name his documentary after what the record company originally suggested fifty years ago, “The Sparks Brothers.”

Ever heard of Sparks?  I hadn’t, despite their relevance during the most formative years of my musical tastes.  And yet, once you hear them, you’ll hear echoes of many other bands and musical trends, their influence undeniable, if not always acknowledged (ahem, Pet Shop Boys).  We’re told early on they’re the type of band that comes up in any discussion in the back of a tour bus, a group more known by their peers than the general public.  But if you think a 140 minute film on a band that may only generate faint sparks of remembrance would be boring, you’d be very wrong indeed.  Wright’s labor of love may be guilty of a fan’s over indulgence, but his subjects will charm the pants off of you, make you laugh and amaze with their creativity and sheer endurance.

Growing up in southern California, Ron and Russell were heavily influenced by the movies they went to see with their dad, as well as the French New Wave and Bergman films they studied at UCLA (a snippet of one of their college films expresses their ability to honor via humor).  They’re a band whose visual representation has been as much a part of their dynamic as their music, whether it be the contrast of singer Russell’s good looks against the odder Ron’s notorious ‘Hitler moustache’ or the stories told on their delightfully bonkers and boundary pushing album covers.  Wright mines this aspect of the band, his documentary peppered with humorous movie clips commenting upon his narrative, like a man in an old timey swimming costume belly flopping off a pier that signifies the reception of their first album.  The band flirted with the movie world throughout their career, projects with Jacques Tati and Tim Burton falling apart (they wrote both the screenplay and music and lyrics for Leos Carax’s upcoming musical and Cannes opener, “Annette.”)

They pay homage to the ‘cool mom,’ widowed while they were pre-teens, who took them to see the Beatles – twice – and are floored when Paul McCartney parodies Ron in his ‘Coming Up’ video along with the likes of Frank Zappa and Buddy Holly.  When they decided to try their luck in England in the early 70’s (the band is continuously mistaken as British), John Lennon reportedly called Ringo Starr to tell him to turn on ‘Top of the Pops’ because ‘Hitler is on the telly’ (Wright recreates the incident in animation, his Cornetto vets Simon Pegg and Nick Frost providing the voices of Lennon and Starr).

Wright takes us through each and every one of their albums (‘Gratuitous Sax & Senseless Violins’ must be one of the best album titles ever) as the band works with folks like Giorgio Moroder and Tony Visconti while we hear from various artists (Beck, Duran Duran's Nick Rhodes and John Taylor, Fred Armisen, 'Weird Al' Yankovic, Mike Myers, The Sex Pistol's Steve Jones, Sonic Youth's Thurston Moore, Flea, Jason Schwartzman, Neil Gaiman, Patton Oswalt and more).

One rhapsodizes that the opening line ‘I’ve got a snapshot of your Aunt Maureen,’ may be the best lyric ever and it’s easy to relate.  The more recent ‘My Baby’s Taking Me Home’ is notable for how Russ, whose falsetto seems part Freddie Mercury, part Tiny Tim, continually changes the meaning of Ron’s repetitive lyric.  By the time the filmmaker’s worked his way up to their challenging live performance of a different album every night for twenty-one nights, we’re familiar with it all, Wright’s exhaustive approach bearing fruit.  But there’s more, Wright seemingly unable to relinquish his bear hug of this band.

It’s a band that constantly evolves - members come and go, none appearing to hold a grudge.We hear little of the brothers’ romantic lives outside of Miss Christine and The Go-Go's Jane Wiedlin’s ‘crush’-ing recollection of her brief fling with Russ.  Ron’s songs express the difference in their desirability (‘I wish I looked a little better’), but there is never a crack in their respective love and admiration for one another, all kidding (and there’s lots) aside.   There’s been a spate of exceptional musical documentaries, like “Zappa” and “Crock of Gold” of late and “The Sparks Brothers” is one of the best of the best.  Prepare for their world domination.

I know a lot about the music of the 1960s and 70s, but I just saw a documentary about a band that performed nearly non-stop since then and I realize that I knew nothing about “The Sparks Brothers.”

Director Edgar Wright is best known for films like “Shaun of the Dead (2004)” and “Hot Fuzz (2007),” so it is a bit of a surprise to see him helm a musical bio-doc about probably the famous band I never heard of before.

I quickly learned, watching what could have been done as a mockumentary (a la “This Is Spinal Tap (1984),” that Wright is deadly serious, in an enormously fun way, thanks to the Sparks Brothers themselves – Ron (the elder) and Russell (the younger) Mael. To accomplish this feat, the filmmakers have a collection of Sparks performances and videos, copious interviews with the Maels and the almost unbelievable assortment of artists who influenced and were influenced by the brothers. (Look it up if you are curious.)

When you listen to the many songs and performances during the course of the documentary, you can hear its elements in the music of the bands and music that followed the Maels boys - who, by the way, put out some 25 albums over their long career.

Focus Features releases “The Sparks Brothers” in theaters on 6/18/21.