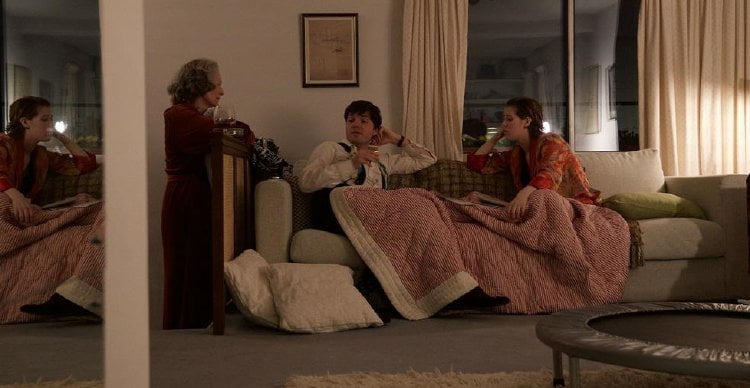 Julie (Tilda’s daughter, Honor Swinton Byrne) is a film student in her early twenties who lives in the posh Knightswood section of London yet wishes to burst her ‘privilege bubble’ by making her thesis about a working class man in Sunderland. She meets Anthony (Tom Burke) at a party, a mysterious sophisticate who decries her own assessment of being average by calling her a freak of fragility, someone who is lost and will always be lost. Anthony shows her a 1778 Jean-Honoré Fragonard painting, saying ‘I am very much in love,’ but is he referring to Julie or “The Souvenir?”

Writer/director Joanna Hogg (“The Exhibition”) reaches back into her own past not only to tell this autobiographical tale but in casting her childhood friend Tilda Swinton (who plays Julie’s mother Rosalind and starred in Hogg’s first short “Caprice” in 1986). This cinematic memoir joins the recent spate of films driven more by remembered moments than a traditional narrative, but it is also a continuation of Hogg’s elliptical style. In her first leading role, Swinton Byrne, her only prior experience playing her mother’s daughter in “I Am Love,” is a revelation, her passion outweighing any lack of confidence, her naïveté endearing, her need to believe in her lover heartbreakingly relatable. Burke, sporting a scarred philtrum and the type of upper class British accent that drips bored condescension, intrigues even as we recognize warning signs Julie purposefully avoids.

Julie does have her guard up when Anthony asks if he can stay at her apartment, muttering something about work, well before their affair has begun, but he is an accomplished manipulator for a reason that remains secret for quite some time (it is revealed by Anthony’s friend Patrick (Richard Ayoade) during dinner quite matter-of-factly as he puzzles out the why of Anthony’s new girlfriend). They cohabitate well in Julie’s white-walled abode, Anthony making a game out of their sharing of her bed, citing ‘It Happened One Night’s’ ‘walls of Jericho’ as he forms a dividing line with Julie’s stuffed animals. Of course the wall eventually falls.

But while Julie enjoys a privileged background, she is still on a student’s budget, so it is notable how Anthony’s casual requests to borrow a tenner mount up, how he cedes restaurant bills and bellboy tips to her. (He claims to work with the foreign office but all we ever see of his 'work' is the occasional stop at a cordoned off area.) Julie, who treats this inconsiderate behavior with nonchalance, is forced to ask her mother for more money, claiming school equipment expenses. Anthony’s suggested trip to Venice marks a major step towards adulthood with a bespoke traveling suit and lavish gown for the theater, but the trip does not bring joy, Julie’s new awareness of what Anthony is hiding bringing nothing but misery. Her schoolwork suffers, a classmate noting that he rarely sees her anymore.

Old world rococo and country settings are contrasted against the modern white of Julie’s apartment (meticulously recreated from Hogg’s own, featuring projections of photographs she took from her windows). Cinematographer David Raedeker’s landscape cutaways, one of reflections in a Venetian canal, another of three trees set low against a big sky, are not used to establish location so much as to establish mood of murky decadence or bright clarity. The cool modernity of that Knightsbridge apartment evolves into a shrouded haven in later goings, Julie’s mother staying over at a critical time (Swinton’s awareness of her daughter’s hidden tragedy is incredibly balanced between British reserve and maternal commiseration). A classroom analysis of "Psycho's" shower scene points towards Hogg's mosaic-like method of filmmaking. The film's 1980's soundtrack is a tastefully curated nostalgia trip.

“The Souvenir” is a realistic portrait of a doomed first love poetically told. It is also a coming-of-age tale, the young woman we find feeling her way discovering her own brightly lit path. (Hogg is shooting part two of “The Souvenir” with Swinton Byrne and, playing an actor, Robert Pattinson.)