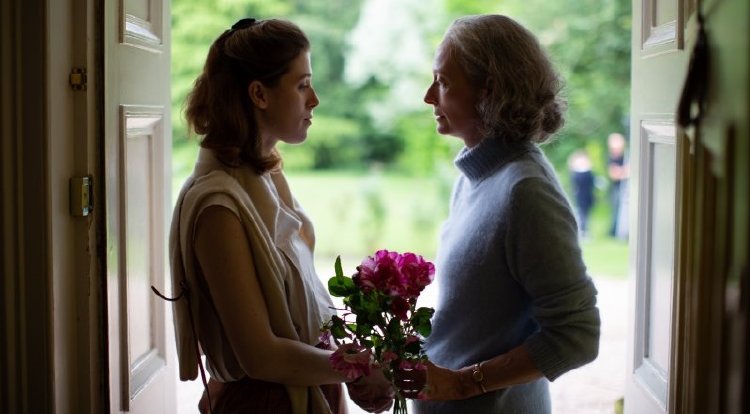 Immobilized by grief after her fiancé Anthony’s death due to a heroin overdose, Julie Harte (Tilda's daughter, Honor Swinton Byrne) retreats to her parents’ farm in Norfolk.  Deadlines for her graduate film pull her back into public life, wan and fragile.  Her constant questions trying to recreate Anthony’s final day spur his friend and her fellow student Patrick (Richard Ayoade) into suggesting she create a memorial and Julie begins to find confidence in her own voice clawing her way out of grief through her art in “The Souvenir: Part II.”

Writer/director Joanna Hogg (“Archipelago”) picks up right from where she left off her autobiographical first film but her flip side to her own coming of age splinters and refracts her own mosaic style, becoming at once more meta and more surreal as it goes along.  While the filmmaker believes each of these two films can stand on its own, “Part II” will be far more challenging to audiences unfamiliar with the prior film, Julie and Anthony’s history, upon which so much of this story relies, relayed in snippets and asides.  If “The Souvenir” conveyed the power and pain of the filmmaker’s mysterious first love, “Part II” finds her breaking free of its oppression to proclaim herself.

After once again experiencing Hogg’s exceptional talent for recreating the hushed comfort and refined yet caring reserve that was life with her parents (portrayed by a silently hovering Swinton and the kindly vagueness of James Spencer Ashworth, both perfection), we travel back to the soundstage of Raynham Film School, where Julie is treated with kid gloves.  The exception would be Patrick, who lashes out at the generic criticism he receives from teachers and peers while attempting to reinvigorate the British musical genre.  Then Julie presents her refashioned script to the mentors who had been so against her prior working class project only to face new objections, up to and including the red ribbon she’s used to bind them.  They state they cannot financially support it in its current form, but Julie, sticking to her guns, heads back to mom for money once more, this time to the tune of ten thousand pounds.

As Julie continues to look for clues as to just what Anthony did on his last day on earth, questioning everyone from her own mother to drug dealers, she recreates her life with him on a soundstage, her continual tweaking translating to her frustrated crew as inexperience and indecision.  But Julie knows what she wants and without Anthony around to undermine her confidence, she is beginning to stand up for herself even as she grapples with being alone and bouts of stress vomiting.

So, if the attentions of Patrick’s lead actor Jim (Charlie Heaton, TV's 'Stranger Things') only result in a one night stand and her come on to her own editor Max (Joe Alwyn, "Billy Lynn's Long Halftime Walk") is gently rebuffed with news of his boyfriend, Julie can talk through her feelings with her therapist (Gail Ferguson).  The Julie who faces letting down an actress friend (Alice McMillan, "The Hitman's Wife's Bodyguard") with news she’s cast another filmmaker (Ariane Labed’s Garance) as her surrogate is not the Julie of the first film.  And the Julie who asks her mother to fund her film isn’t the same one who nickel and dimed her to unwittingly support Anthony’s habit because by sticking to her guns, this one is not only able to support herself making music videos but can very proudly pay her mother back (‘It’s been a pleasure doing business with you,’ Swinton replies, her pride evident as well).

It is in the film’s final goings where it becomes most surreal, “The Souvenir” we see Julie present not the one we’ve been watching her film.  Instead Hogg recreates Julie’s experience in a surreal black and white piece starring Swinton Byrne (along with the first film’s Tom Burke) which ends in a burst of color, Julie jubilantly running ‘away’ from the black and white action.  Production designer Stephane Collonge is now tasked with building upon his work on “The Souvenir,” not only recreating Hogg’s Knightswood apartment but re-recreating it on Julie’s soundstage while also imagining the corner’s of Julie’s own mind.  Cinematographer David Raedeker and his tonal landscape cutaways returns, now tasked with filming the filmmakers.

With “The Souvenir: Part II,” Joanna Hogg has completed a unique cinematic memoir, the coming of age of an artist through the looking glass of doomed romance.