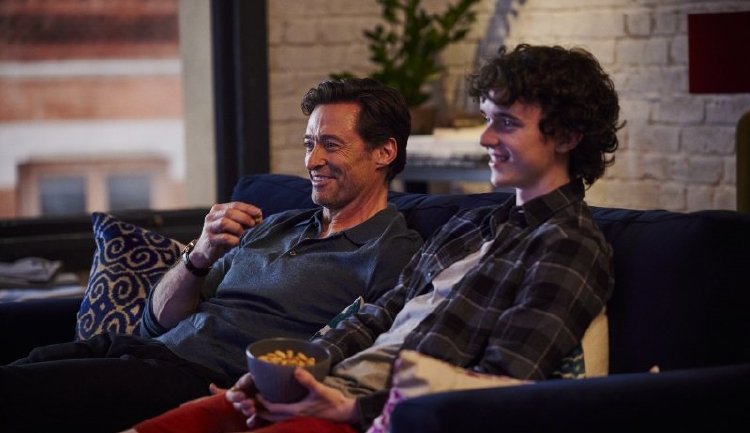 Peter (Hugh Jackman) is basking in the glow of his new baby, Theo, and his new wife Beth (Vanessa Kirby) when he answers a knock at his NYC apartment door.  ‘What are you doing here?’ he asks ex-wife Kate (Laura Dern), who hurriedly informs him he hasn’t been answering her calls and that they have to talk about Nicholas (Zen McGrath), who she has just learned hasn’t attended school for a month.  Suddenly Peter’s old life puts an inconvenient burden on his new one as he struggles against following in his own father’s footsteps while dealing with “The Son.”

Cowriter (with "The Father's" Christopher Hampton)/director Florian Zeller adapts another of his stage plays for his sophomore feature film but where “The Father” was a masterpiece of empathy, “The Son” substitutes self superiority wrestling with self reflection compounded by such obvious foreshadowing one is tempted to scream at the film’s adult characters as if they were about to split up to search for the killer in a horror movie.  The best thing to be said about “The Son” is that it is a sterling example of how not to deal with suicidal tendencies.

To be fair, Jackman tries to give a layered performance of a man trying to resist the influence of his father (Anthony Hopkins, employing a hint of Hannibal Lecter), a cold and uncaring man who left his son to deal with the slow death of his mother as a teenager, by trying to be a good father, but it is clear from the onset that dad’s established scales of achievement have been firmly planted.  And so while Peter initially appears genuinely compassionate when listening to his troubled son, he quickly reverts to old patterns.  Zeller’s whiplash direction results in a confused performance.

Then there’s Nicholas, a troubled teen whose mom, still in love with her ex, feels a failure for losing both her husband and now, she believes her son, having seen hatred in his eyes.  Yet the boy gives signals as confused as his dad’s, telling new stepmom Beth that he was torn between his mother’s vilification and his idolization of his father.  Moments later, he’s telling dad ‘everything you did to hurt mom hurt me.’  But most of the time, it appears to be life itself that is the boy’s burden.   And in her attempt to do the right thing and take on a troubled teen just as she’s dealing with a newborn, Beth eventually finds herself and her child being abandoned, just like Kate and Nicholas before her, at least until she isn’t in the film’s ham fisted coda.

The film’s climax is just what we expect, followed by what can only be described as watching a car accident in slow motion, Nicholas manipulating his parents’ emotions so obviously a child could see it.  Zeller’s use of Chekhov’s principle is based on ridiculously shaky ground to begin with, his repeated shots of a running front loading washer, presumably to add tension, instead adding absurdity.  The ensemble tries to give all this drama a human dimension, but “The Son” is a misfire, adults behaving with an inconceivable amount of irresponsible stupidity.