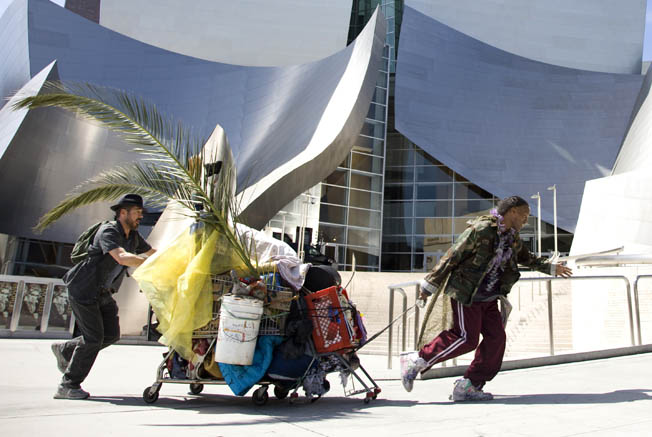 L.A. Times columnist Steve Lopez (Robert Downey Jr., "Iron Man," "Tropic Thunder") was struggling to find a story while rebounding from a bad bicycling accident when he wandered past a homeless man playing a violin with only two strings in front of a statue of Beethoven. The obviously troubled Nathaniel Ayers (Jamie Foxx, "Ray," "The Kingdom") tells Steve he went to Juliard and Lopez thinks he has his story. But Nathaniel becomes so much more than a story when the commitment phobic Lopez finds he cannot stop himself from trying to help "The Soloist."

It's always troubling when a film slated for Oscar season release gets yanked and moved into the following year. Clearly the distributor wasn't willing to gamble on the campaign necessary to garner nominations. And although "The Soloist" is the third feature by Joe Wright, whose "Pride and Prejudice" and "Atonement" were both Oscar bait, and that it stars Oscar-nominated Robert Downey Jr. and Oscar winning Jamie Foxx, this distributor made a wise choice. "The Soloist" is a well-acted film that doesn't go particularly anywhere, a film with strong production values whose director appears to lack confidence of vision. It's both overworked and underdone. Like "State of Play," "The Soloist" is set against the newspaper business at a time when the print trade is dying, although here it is depicted by a steady stream of layoffs rather than "State of Play's" bolder (and more recently set) exploration of the loosening of journalistic integrity. In "The Soloist," there's never a sense that Lopez's job, or that of his ex-wife editor Mary's, is at stake, though, just that their working environment is growing more depressing. If there is a story arc to "The Soloist," it is that a man who dances around commitment and away from a marriage comes to commit himself to another human in need even when he is past gaining anything from the relationship. But in this case, that is not enough. Wright and screenwriter Susannah Grant ("Erin Brockovich," "In Her Shoes") attempt to give Nathaniel a back story through the flashbacks precipitated by Steve's tracking down his sister Jennifer (Juliard graduate Lisa Gay Hamilton, "Nine Lives," "Honeydripper"). We see a young boy living in the basement of an Ohio home where his mother operates a beauty parlor. She encourages his passion for music and he is seen as a prodigy, but he also begins to disassociate as he grows older, oddly suggested as the result of witnessing a racial incident in his neighborhood (Wright clunkily juxtaposes the image of a burning car outside Nathaniel's basement level window with Nathaniel retreating to his cello in front of the flame of the cellar furnace). Speaking of awkward metaphors, Lopez is saddled with raccoons. It is a raccoon that causes his bike crash, then the critters dig up his lawn. (At one point, Steve finds Nathaniel in white face makeup that suggests a photo-negative raccoon.) Lopez's story make Nathaniel a local semi-celebrity, garnering the attention of music professionals and charitable donations. Steve thinks he is all set when he procures a cello for Nathaniel, insisting that it be stored at L.A.M.P., a local homeless shelter, but Nathaniel resists 'going inside.' Steve also has his eyes opened when he visits the shelter and sees its neighborhood streets choked with homeless, many on crack and looking to finance more. (And Wright goes for his trademark ultra-tracking shot here, but it fails midpoint with an edit.) When Steve tries to disengage himself, L.A.M.P. manager Jim Trotter (David Jean Thomas) gives him some down-to-earth truths. Ex-wife Mary is made to mention Steve's lack of commitment at multiple opportunities, most embarrassingly when drunk at an appreciation dinner for him, just in case we don't get the connection between the two. And that's really all there is to "The Soloist." Foxx does a good job portraying schizophrenia and wearing a very colorful wardrobe. We learn little things about Nathaniel, like how he can become violent (both in flashback and present), but the character doesn't really change. Downey Jr. is always interesting to watch. He doesn't have a whole lot to work with here, but he makes it as entertaining as he can (even though suffering the indignity of getting doused with urine, not once, but twice, and not by the homeless). Keener's left with little to do but pine resignedly. Tom Hollander ("Pirates of the Caribbean: At World's End," "Valkyrie") pops up as an uptight, uber religious professional orchestra musician willing to give Nathaniel lessons and is just odd (when he's not being a plot device). Jena Malone, looking like the undead, cameos in a nothing role early on, another head scratcher. The film has been nicely shot by Seamus McGarvey ("The Hours," "Atonement") and, of course, the music is terrific, but again, Wright makes a weird artistic choice when visualizing Nathaniel's synesthesia. In an amusing bit, Lopez is frustrated by Nathaniel's resistance to leaving his cart to attend a rehearsal at Disney Hall, so he helps him push the overloaded carriage all the way there. Steve is astounded at how Nathaniel completely loses himself in the music and Wright depicts Nathaniel's experience as a series of changing, swirling colors, not unlike those used for the old coming attractions bumpers, and with no seeming relationship to the notes or instruments being played. Like the film, the sequence seems like an idea was fostered, then left unfinished.