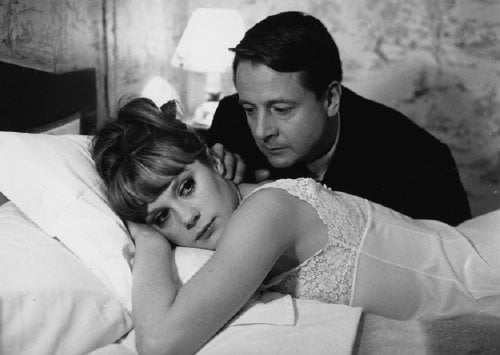 When Pierre Lachenay (Jean Desailly, "The Professional") travels to Lisbon to give a lecture, he initiates an affair with air stewardess Nicole (Françoise Dorleac, "The Young Girls of Rochefort"). The married father of 10 year-old Sabine (Sabine Haudepin, "The Last Metro") becomes obsessed, but his passion will be his downfall in "The Soft Skin."

The film may be from 1964, but Boston's Museum of Fine Arts' 16th Annual French Film Festival will be featuring a new print of perhaps one of Truffaut's least known films. I know I had never seen it, but now it is perhaps my favorite of his. The film fascinates as we watch Lachenay dig himself into a deeper and deeper hole. Truffaut has directed the film more like a thriller than a melodrama, and its central act, where Lachenay accepts an invitation to present a film in Reims for the sheer purpose of spending two days away with his lover, plays a bit like "After Hours" with its if-things-can-go-wrong-they-will absurdity. We're introduced to the Lachenay household in Paris in an uproar. Pierre is already late leaving for the airport and his wife Franca (Nelly Benedetti) plans on taking him, even though her driving makes him nervous. Family friend Bontemps (Maurice Garrel, "Kings and Queen") arrives just in time to take on the honors and daughter Sabine goes along for the ride. Truffaut stages this like a getaway, shot from inside the car, the score pulsing with urgency. Lachenay's entitlement is established as he is escorted to the plane personally and takes his seat in First Class. He repeatedly makes eye contact with Nicole and watches what he can see as she changes her shoes into heels behind a curtain. At his hotel they pass paths and he identifies her room by those heels outside the door. He calls to apologize for not having helped her with her packages and invites her for a drink, but it's after 1 a.m. and the bar is closed. She suggests 6 p.m. the next day and he agrees. Earlier he'd informed his lecture host he was leaving at noon. After close silences in elevators, the two talk all night, walking back to their hotel in daylight, going to the same room. On the flight home, Nicole pointedly places a book of matches on Pierre's tray. The film was shot in black and white by Raoul Coutard ("Breathless," "Jules et Jim"), whose camera worships Dorleac, the stunning, ill-fated sister of Catherine Deneuve (she died in a crash rushing to the Nice airport at the age of twenty-five, ironic given this film's opening). When Pierre declines to dance, saying instead he will get his pleasure from watching her, so do we. But Coutard and Truffaut do not neglect the home front. When Pierre kisses Sabine good night, alternating from left to right cheek over and over, her doll casts an accusing glance with every other peck. There are two cloth dolls draped on either side of Sabine's door, perhaps representing Pierre's wife and daughter. Benedetti is a dark beauty, whose black slip contrasts with the blond Dorleac's white (is Pierre moving from the darkness to the light?). Cowriter (with Jean-Louis Richard, "Day for Night")/director Truffaut maintains an air of mystery and suspense throughout his film. We initially wonder about Nicole, who seems to be sharing a secret with Frank, the co-pilot who shares that first elevator ride with her and Pierre. In Reims, almost every move Pierre makes is blocked and when he is maneuvered into a drink by his well-intentioned friend and host Clément (Daniel Ceccaldi), his view is of the dark street - where Nicole is being badgered by a stranger. There is a great balance between humor and threat in this sequence and the dinner party thrown for Pierre could have come from Chabrol. After a romantic interlude after the two finally do get to be alone, Pierre is thrown into turmoil back at home when suddenly nothing is sure. The film's conclusion comes in a series of sudden bursts, Franca's actions abrupt and extreme. When we learn what Pierre must pay for his infidelity, we realize maybe the film's opening was not meant to be seen as rushing from a crime scene, but to one.