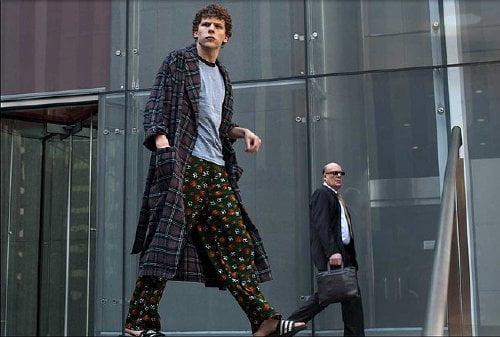 2003. Mark Zuckerberg (Jesse Eisenberg) is an undergrad at Harvard and a genius at computer programming. He seizes on an idea to integrate all the different college networks into an entity that will revolutionize internet communication worldwide. Six year later, Zuckerberg became the world’s youngest billionaire, but this led to enormous lawsuits and a personal crisis in “The Social Network.”

After being dumped by girlfriend Erica Albright (Rooney Mara, 2010's "A Nightmare on Elm Street") and a few too many drinks, Harvard University sophomore Mark Zuckerberg (Jesse Eisenberg, "Zombieland") posted some nasty things about his ex on his blog, then hacked Harvard's student ID databases to take out his frustrations on all women by creating Facemash. The game let users rate Harvard's female students via their pictures and went so ballistically viral it brought down Harvard's network overnight. His ensuing notoriety brought him to the attention of the Winklevoss twins (Armie Hammer, channeling the voice of Don Draper, in a true breakout role) who asked him to program their website Harvard Connection, but instead Zuckerberg walked away and, backed by cash from best friend Eduardo Saverin (Andrew Garfield, "Never Let Me Go"), created Facebook, attracted lawsuits and became the world's youngest billionaire in "The Social Network." Director David Fincher's last masterpiece, "Zodiac," was completely ignored by Oscar, even though his flawed followup, "The Curious Case of Benjamin Button," scored nominations and a few wins. With "The Social Network," look for Fincher's Oscar recognition to finally come home. Writer Aaron Sorkin ("A Few Good Men," TV's "The West Wing") used multiple, often conflicting, points of view to develop his universal theme of class prejudice set within the distinctly twenty-first century business world of tapping the zeitgeist via software. Fincher directs by packing the pages into a rocket launcher, forcing his actors to propel themselves at a warp speed that gives his audience head rush. It may not be completely factual, but the emotions at play feel true to Harvard's motto, Veritas. After that brilliant, extended opening scene, Sorkin structures his screenplay as a series of flashbacks built around the depositions given for the lawsuits brought against Zuckerberg by Cameron and Tyler Winklevoss and Divya Narendra (Max Minghella, "Agora") for allegedly stealing their idea and by Saverin for being cheated out of his fair share of proceeds as a cofounder of Facebook. This gives him the leeway to paint an impression based on opposing points of view (and considering Sorkin used Ben Mezrich's research for his book, "The Accidental Billionaire," his relative restraint lends his work credence). From the all night coding sessions to campus celebrity with the opposite sex to Palo Alto, where Zuckerberg allowed himself to be dazzled by Napster creator Sean Parker (Justin Timberlake exuding a huckster's confidence) much to the hurt, cautionary chagrin of Eduardo, the screenplay is a classic on friendships torn and made by business, on motivation of an outsider wanting to get in, made modern by its creation, an immaterial product to connect people while keeping them detached. The film subtly weaves Facebook features into its story, ending on a perfect back-to-the-beginning note. Jesse Eisenberg is still recognizable as the kid who starred in "The Squid and the Whale" but Fincher's gotten a new level from the actor (there are stories of takes numbering in three digits). His Zuckerberg has a cold facade with a multi-threaded brain running several beats before anyone else's, who speaks in a rat-a-tat monotone but whose eyes confess a longing to belong - if you look close enough. That first extended scene with Rooney Mara tells us just about everything we need to know about the guy - he unwittingly insults the woman he loves by stating the fact that she doesn't need to study because she goes to BU. She tells him that dating him is 'like dating a Stairmaster.' Watch the way Eisenberg doesn't *quite* sneer when he refers to the twins as Winklevi, putting them in their place as a species beneath, the same way he unhesitatingly flouts authority (a HU IT admin board, deposition lawyers). Speaking of Harvard, Fincher, the visual maestro, seems to have been given unprecedented access to the grounds, but most of it was shot at Phillips Academy. Still, the film is drenched in realistic touches, from talk of its inconsistent IT structure to an overhead shot of Zuckerberg running from the Science Center. A scene of the Winklevi appealing to Larry Summers (Douglas Urbanski) to uphold Harvard's ethics is a comical delight. "Fight Club" cinematographer Jeff Cronenweth shoots in the cool blue/greens of Facebook with Harvard given its gloomy burgundies. Scoring by Trent Reznor (whose "Closer" famously opened Fincher's "Se7en") and Atticus Ross is like progressive rock funnelled through new wave synthesizers, intellectual emotion computerized. End credit song, The Beatles' "Baby, You're a Rich Man," is perfect. Fincher initially seemed like a mismatch for this material, but now it is hard to imagine anyone else equaling what he's orchestrated here. He's a technical virtuoso who is also able to get to the heart of the matter and "The Social Network" is the film to beat this year.