The Smurfs in 3D 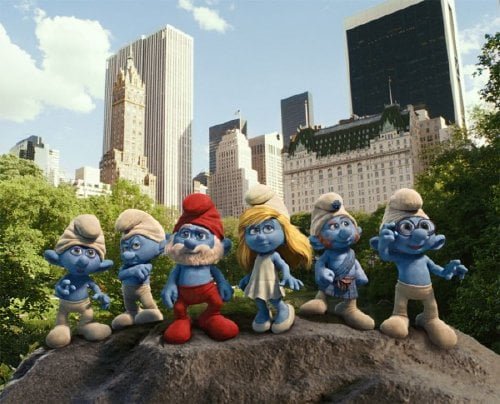 When Clumsy (voice Anton Yelchin) inadvertently leads the evil wizard Gargamel (Hank Azaria) through the invisible shield to his village, Papa (voice of Jonathan Winters) leads a group through a vortex which lands them in New York City's Central Park. A series of mishaps brings them into the apartment of Patrick Winslow (Neil Patrick Harris) whose more delighted, pregnant wife Grace (Jayma Mays, TV's 'Glee') tells the stressed cosmetics marketing exec that the little guys bring luck in "The Smurfs in 3D."

Director Raja Gosnell may have experience mixing live action with CGI assisted talking animals ("Beverly Hills Chihuahua") but the writers behind "Daddy Day Camp" (J. David Stem & David N. Weiss) and "Norbit" (Jay Scherick & David Ronn) haven't exactly set any standards for wit. Adapting Peyo's creatures for their big screen debut, the screenwriters simply rehash every stranger-in-a-strange-land-inadvertently-helping-human-after-high-annoyance-factor plot you've ever seen and their idea of puns aren't even clever enough to elicit a groan. Hank Azaria gives his all as Gargamel, providing the film's only laughs as he becomes obsessed with emerging from steam rising from city grates for its 'mystery' effect, while Neil Patrick Harris finally proves he isn't good at everything he sets out to do. Before we leave the wreckage of Smurf Village, which had been in preparation for their Blue Moon Festival, it's kind of hard to tell the little buggers apart. Even a couple of the handful who leave never come into clear focus. The leader, Papa, is notable for his red cap, Gutsy (voice of Alan Cumming) for his Scottish accent and kilt, Brainy (voice of Fred Armisen) his oversized glasses. The only female in the pack, Smurfette (voice of Katy Perry), originally created by Gargamel to addle the other Smurfs, stands out only for her hair and not for Perry's vocals ('I kissed a Smurf and I liked it' is supposed to pass for humor). Gargamel wants Smurf essence and the Smurfs need a Blue Moon to return home. Winslow is under the gun by his boss, shrewish cosmetics CEO Odile (Sofía Vergara, TV's 'Modern Family,' picking up a paycheck), to give her a campaign that she 'wants' rather than what she's asked for, and he only has the two days during his home Smurf invasion to do it. It's easy enough to see how things will go. Gosnell gets to make animals talk again in the form of Gargamel's cat Azrael (Mr. Krinkle), who gets some of the film's few funny lines, but he hasn't helped Patrick Harris engage with the Smurfs as we're painfully aware of Harris's every eye line and physical engagement with a character-to-be-added-later. His performance is stiff as well. Not so 'Glee's" Jayma Mays', who is quite sweet as the Smurfs' advocate, especially Clumsy's. There's a forced theme between Winslow's upcoming fatherhood and his intolerance for the 'little people' running around his apartment, a frenzied chase through FAO Schwartz toy store that's more about product placement than clever riffing, an aborted subplot about Odile trying to hire Gargamel and a climax that features Joan Rivers, gossip columnist Liz Smith and a particularly embarrassed looking Tom Colicchio as party guests. 'Project Runway's' Tim Gunn walks around as one of Odile's henchmen spouting his stock phrases. The film does look very good with lots of interesting textures to the CGI Smurfs and one 3D sequence which had me believing leaves were being sucked forward from behind my head. But the film is for little kids only - parents will have to be content with noting that whenever Smurfs jump aboard NYC cab roofs, the advertisements always feature something significantly blue.