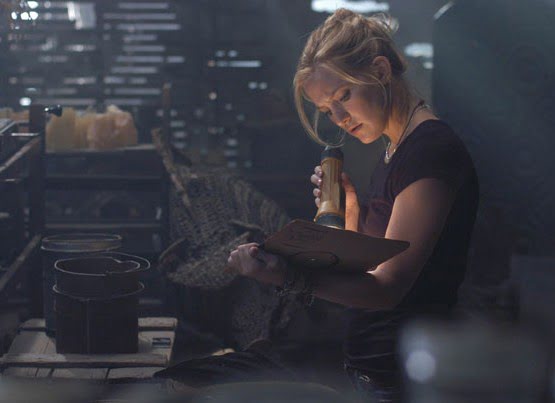 Hospice worker Caroline (Kate Hudson, "Le Divorce," "Raising Helen") thinks she's been hired by Violet Devereaux (Gena Rowlands, "The Notebook") to care for the elderly woman's ailing husband Ben (John Hurt, "Hellboy") in their decaying Louisiana Greek Revival mansion in the remote swamplands of Terrebonne Parish. But Ben's distress combined with Violet's elusiveness and whisperings of a history of Hoodoo magic in the house make Carrie inquisitive and determined to unlock a mysterious barricaded attic room with "The Skeleton Key."

If director Iain Softley ("The Wings of the Dove," "K-Pax") was following his pattern, we were due for a good film this time around and while he doesn't exactly knock one out of the park, "The Skeleton Key," while not actually scary, features terrific Southern Gothic production design (John Beard, "The Wings of the Dove"), credible acting and a fairly effective twist ending. Haunted by the unattended death of the father who brought her up in New Jersey, Caroline Ellis has been devoting her life to the sick, determined that no one on her watch die alone. She's disgusted by the uncaring treatment her latest patient, Mr. Talcott (Bill H. McKenzie), receives after his hospice death and so responds to an ad in a local paper. Her best friend in New Orleans, Jill (Joy Bryant, "Spider-Man 2"), doesn't understand why Carrie would want to isolate herself with 'old people,' but Carrie sees the Devereaux's job as a chance to do good and earn good money at the same time. But when she arrives at the creepy old house, Violet Devereaux seems none too pleased to see her. It takes the intervention of the handsome and charming Devereaux estate lawyer Luke (Peter Sarsgaard, "Kinsey"), who actually ran the ad, to bring the parties together. Oddly, secretive Violet immediately entrusts Caroline with a copy of her skeleton key, which opens every room in the house, but when Caroline asks why all the mirrors are missing, Violet gives a lame explanation involving elderly vanity. Caroline finds an attic room that her key won't unlock and Violet tells her that the key has never unlocked that room and that she and her husband, who've lived in the house since 1962, have never been in it, yet Luke had told her Ben suffered his stroke in that room. But Caroline really becomes alarmed when, awakened by noises from the roof on a stormy night, she finds Ben, a purported paralysis victim, crawling across the roof having scrawled the words 'help me' with dirt from a house plant on his bed sheets. Violet begins to act more suspicious of Caroline's motives, but Caroline forces a confrontation after she gains access to the locked room and discovers a Hoodoo room belong to servants of former owners. That's when Violet finally tells her the disturbing history of the house and the Hoodoo magic of Papa Justify (Ronald McCall, "Fried Green Tomatoes") and his wife Mama Cecile (Jeryl Prescott Sales). Writer Ehren Kruger (both "Ring" remakes, the upcoming "The Brothers Grimm") has come up with his best script to date, instilling a real regional flavor to a timeworn genre and actually using some subtlety in misguiding the audience. Dialogue shows some character ('Remove your perspirations,' Violet instructs Luke upon finding him with Caroline in the young woman's bedroom) and the central cult of folk magic Hoodoo is well defined and made distinct from the more well known Voodoo. Softley gets fine performances from his cast. Rowlands settles right into her superstitious Southerner and keeps us guessing, although she's required to exhibit a preternatural strength at film's climax that impairs her performance. Hurt practically vibrates trying to communicate from within a body that can not cooperate and Sarsgaard, one of our best young actors, coats his charm with the faintest patina of oil necessary to make us regard Luke with a quizzical eye. Most surprising is Hudson, maturely grounded and never falling back on scream queen maneuvers. The filmmakers' biggest failing is that "The Skeleton Key" is a rather unhorrifying horror film. They resort to such tactics as having their heroine turn to find another character directly in her face, the shock cut accompanied by a loud bang on the soundtrack, and expect us to accept on faith that a 24 year old would own a turntable and extensive LP collection. Yet they certainly conjure up a mood with the Felicite Plantation location, its foyer walls decorated with swamp trees dripping Spanish Moss and antique, life-size statues of saints standing in its corners (set decoration by Beauchamp Fontaine, "Team America: World Police"). Luke's New Orleans apartment is also effective, all old wood and dark shadows. Ed Shearmur's ("Sky Captain and the World of Tomorrow ") score evokes the inkier aspects of the place and director of photography Dan Mindel ("Stuck on You") visualizes its dense dampness.