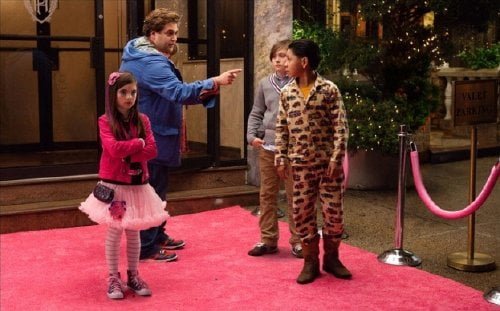 Noah Griffith (Jonah Hill, "Superbad," "Moneyball") is a college student with no ambition who is manipulated into a childcare gig by his mom (Jessica Hecht, "J. Edgar") and the bosom of the kiddies' mom, Mrs. Pedulla (Erin Daniels, "One Hour Photo"). But despite his hardline tactics, he's no match for charges Slater (Max Records, "Where the Wild Things Are"), Blithe (Landry Bender) and Rodrigo (Kevin Hernandez, "How I Spent My Summer Vacation") who run rings around "The Sitter."

Noah Griffith (Jonah Hill, "Superbad," "Moneyball") is a college student with no ambition who is manipulated into a child care gig by his mom (Jessica Hecht, "J. Edgar") and the bosom of the kiddies' mom, Mrs. Pedulla (Erin Daniels, "One Hour Photo"). But despite his hardline tactics, he's no match for charges Slater (Max Records, "Where the Wild Things Are"), Blithe (Landry Bender) and Rodrigo (Kevin Hernandez, "How I Spent My Summer Vacation") who run rings around "The Sitter." Director David Gordon Green ("George Washington," "Your Highness"), who has had the wonkiest career path in Hollywood history, continues with his series of druggie comedies with "The Sitter," a lazy first produced screenplay that turns "Adventures in Babysitting" into pretty much one adventure with Jonah Hill as a failed student who is nonetheless packed with folksy wisdom for the kids left in his charge. Hill and two of the three kids just about save this, but while it's not as dismal as "Your Highness," it's also no "Pineapple Express." Somehow it plays like "Date Night" without all the cool cameos. Once Noah agrees to the babysitting gig, he thinks he's gonna get away with sitting on the couch watching what he wants to watch. This after having already been spray perfumed in the mouth by 'dance-club-celebrity-marketeer' in the making Blithe, the youngest of the three kids in his care. Rodrigo is a sullen El Salvadorean adoptee who lives in the basement and begins destroying anything breakable as soon as the parents exit the building and Slater s a socially awkward misfit who will not stop texting his friend. Noah's been forbidden from using the family car because of a recent DUI, so of course he gets a phone call from Marisa (Ari Graynor, "What's Your Number?"), the woman Noah likes to think of as his girlfriend, promising sex if he buys some coke and brings it to a party. And they're off. The whole film revolves around demented drug dealer Karl (Sam Rockwell), who treats Noah like his 5th best friend but acts like a homicidal maniac. Especially after Rodrigo steals an egg full of cocaine which blows up in Noah's face. "The Sitter" involves Noah being put into situations that make him look like a child molester as he tries to come up with cash to pay the dealer while on the run. He meets a former high school friend with a grudge who ends up coming to his rescue and a current college classmate who becomes a love interest. Neither scenario is the least bit believable (especially when that love interest returns for the film's finale after having walked off hurt when Noah takes a call from his 'girlfriend'). Noah, of course, also 'fixes' each child's destructive personality trait and Hill's really good making those one-on-one speeches work, especially with Slater. Max Records gives an unusually well shaded and off beat performance for a film like this that holds large promise for his future as an actor. Young unknown Bender is also a comedic natural, but Hernandez doesn't do much with a pretty much one-note character. None of the female characters are well written, although Jackie Hoffman ("Garden State") is memorable in one scene as the mom hosting a Bat Mitzvah. So dragging kids through bad areas of New York City and exposing them to drugs, recreating the shooting-in-the-foot scene from "Goodfellas" with a rollerblading queen and the requisite bodily fluid jokes are where "The Sitter" goes for its humor. It has its moments, but if not for Hill, Records and Bender, it wouldn't be worth the sit.