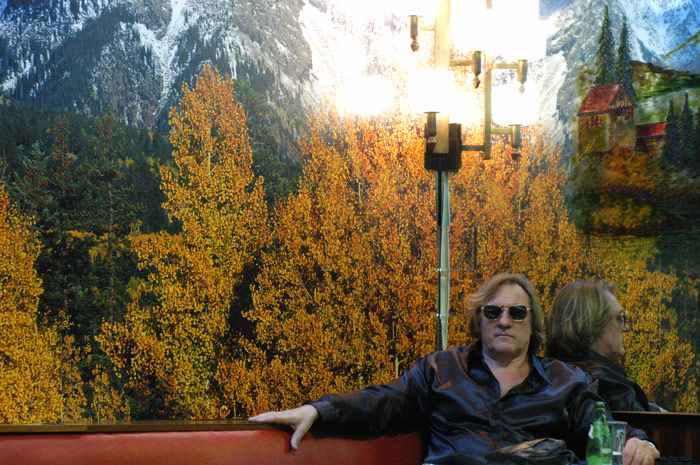 Nominated for 7 Cesars including Best Picture, Actor, Actress and Supporting Actress, "Quand j'étais chanteur" is a very unique love story featuring a knockout performance from Depardieu, who I didn't think had this much left to give. He even does his own serviceable singing. Looking a wee bit trimmer than in such recent outings as "The Closet," Depardieu charms as a washed up performer who keeps carrying on, loved desperately still by his former lover, manager Michèle (Christine Citti, "The Page Turner"), but needing something else, something that he finds in Marion. Writer/director Xavier Giannoli plunks us into France's heartland, a region not frequently visited in film. It's a mix of modern yet provincial office buildings, farms and nightclubs last trendy three decades prior. This is where Alain Moreau retains a type of fame, where middle aged women are agitated by his highlighted hair, tight pants and leather jackets. Moreau is still used to making them swoon, so while he is unsurprised that Marion accompanies him home, he is distressed to find her gone in the morning. For her part, Marion awakens in disgust, clearly feeling she has allowed the moment to let her slip beneath her usual standards. When Alain shows up at her place of work, she is cold, but once again he makes her soften. 'You're thinking why did I sleep with a guy like that,' he says and a fledgling friendship born of a concocted professional need develops - Alain claims he needs to change his living space. For a love story, Giannoli develops his protagonists as much apart as together. We learn that Marion's life is difficult - she has a young son she does not spend enough time with and an apparent ex who is at least verbally abusive. She lives in a sterile apartment without much in the way of personal belongings. She's grateful enough to Bruno, admittedly more handsome and younger than Alain, to perhaps fall into bed with him. Alain loves singing his silly love songs, even if it means being largely ignored accompanying himself at a restaurant or serenading senior citizens parked before his CD sales table. He lives in a ramshackle farm with his pet goat, surrounded by recording equipment and the detritus of his career. He's comfortable still sleeping with Michèle (among others), although impassive enough that she finally agrees to marry Daniel (Patrick Pineau, "Capitaine Conan"). When these two are together, however, it is clear Marion's is happy and her soul is being nourished while Alain is sadly hopeful and invigorated. "The Singer" took me by surprise and is my top pick of the MFA's 12th Boston French Film Festival to its midpoint. This touching film is a tonic, an adult love story that moves one with its honest emotions.