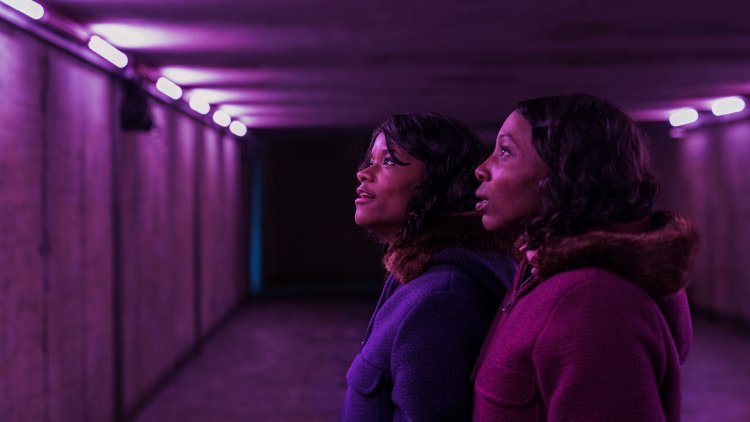 In 1974, Barbadian RAF mechanic Aubrey Gibbons (Treva Etienne) moved his family to Haverfordfest in Wales where his 10 year-old daughters were the only Black children in their school.  Bullied and ostracized, June (Leah Mondesir-Simmonds and Letitia Wright, "Black Panther") and Jennifer Gibbons (Eva-Arianna Baxter and Tamara Lawrance, "Kindred") withdrew from society, speaking only to themselves in their childhood bedroom where their imaginations found outlet in the creative arts.  They became known as “The Silent Twins.”

It may be coincidental that director Agnieszka Smoczynska’s ("The Lure") feature film about the Gibbons twins opens on the same day as Morgen Brent’s Bowie doc “Moonage Daydream,” but both films thrust us into the world of the titular artists using their writings, songs and artwork.  Smoczynska’s film follows a more traditional biopic template, frequently segueing into fantastical reveries using stop motion animation to tell the twins’ tales or overdubbing scenes with original songs by Zuzanna Wronska which use their words and are performed by Lawrance.  The effect plunges us into the subjects’ head space, but is only partially successful in explaining their mystery.

The film gives us a mere hint of the causal reason for the twins’ disenfranchisement before school officials inform Aubrey and Gloria Gibbons (Nadine Marshall) that they must be transferred to a special needs school.  There child psychologist Tim Thomas (Michael Smiley, "Kill List") attempts to reach them by running tape recorders, one asking them various questions, the other recording their answers.  There is only silence, although a reel to reel device becomes prominent in their imaginative play.  Next officials try separating the two, but that only results in further isolation.

The film kicks into higher gear when the roles are taken over by Wright and Lawrance, who both unnaturally contort their mouths to effect lisping enunciation (in real life, the twins developed their own ‘crypto’ language which would have magnified their alienation but required writer Andrea Seigel ("Laggies"), adapting Marjorie Wallace’s book, to reinvent it and Smoczynska to subtitle it).  They may be each other’s rocks, but now we begin to see that they are also very competitive, something which leads to physical fights.  In order to expand their horizons, the girls take up with a couple of white toughs, Wayne (Jack Bandeira, "The Duke") and Carl Kennedy (James Monckton), leading to sexual experiences, glue sniffing and crime.  June gets a published book out of it, ‘Pepsi-Cola Addict,’ but the girls’ inexplicable criminal act of petty thievery and arson at a local car dealership lands them in court, where their unusual psychology results in the inhumanely harsh sentence of an indefinite stay at Broadmoor high-security psychiatric hospital at the age of 19.

The film’s stop motion animation features felt puppets of parrots, a doctor and a large eyed dog named Bobby which we view the twins create to tell stories symbolizing their fates (the heart of the dog is used to save the infant that loves it, a bit of eerie foreshadowing).   Production Designer Jagna Dobesz, already tasked with creating a Welsh town in Poland, collaborates with cinematographer Kuba Kijowski ("The Lure") for scenes in which fantasy jarringly becomes reality, a romance novel conceptualization of sex turning into a far uglier truth in a garage.

Wright and Lawrance may not look identical but the costars develop such a palpable bond their physical separation feels like an amputation.  Their animalistic fights, the two women rolling around on a trafficked road, erupt out of the blue but recede quickly into calmer cohabitation, the physicality another expression of the intensity of the relationship.  Journalist Marjorie Wallace (Jodhi May, "A World Apart") takes an interest in their case which turns into activism, although here she is more sympathetic audience stand-in.  With “The Silent Twins” Smoczynska gives a real life oddity a human face.

Focus Features releases "The Silent Twins" in theaters on 9/16/22.