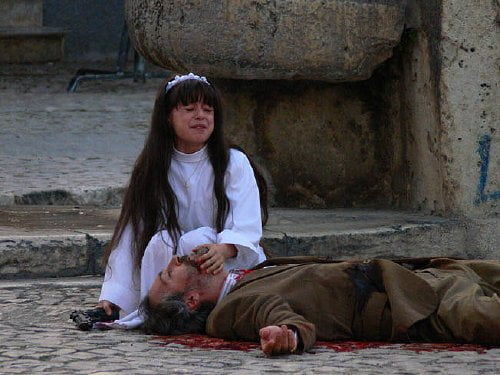 In 1991, Rita Atria, the daughter of a long dead Mafia don, turned state’s witness when she brings a stack of diaries containing details of mob misdoings in Sicily - murder, prostitution, drug smuggling and all manner of organized crime. The evidence leads to wide spread arrests of high ranking Mafia leaders and Rita must go on the lam to evade mob retaliation and certain death. Sophomore helmer Marco Amenta brings this true story to the screen in “The Sicilian Girl.”

When she was ten years old, Rita Mancuso (Miriana Faja) was the indulged daughter of Don Michele (Marcello Mazzarella), who in turn was beloved in their Sicilian town of Balata. Seven years later, after Rita (Veronica D'Agostino, "Respiro") had witnessed the deaths of both her father and brother, she put herself at great risk by breaking the Omertà, traveling to Palermo's Central Court to give information to Chief Prosecutor Paola Borsellino (Giulia Andò), who would help her see the things she missed as "The Sicilian Girl." Director Marco Amenta, whose cowriters have worked largely in television, has taken a fascinating true story and treated it like a television mini-series edited into feature length. Although D'Agostino is quite compelling in the lead and Andò has a surprising arc in his relationship with her, most other characters are so shallow they feel like placeholders. Take, for instance, Bruni (Paolo Briguglia, "Good Morning, Night"), the kindly cop who overcomes Rita's cold put downs to show kindness in providing her a new wardrobe when she's put into witness protection in Rome. The actors have a nice exchange, then he's dropped merely to become a symbol a bit later in the film. Much the same happens with Lorenzo (Primo Reggiani), the young Roman who romances the wild young woman. Rita's mother (Lucia Sardo, "Malèna") is an unsympathetic crone who values Omertà more than her own flesh and blood. Vito (Francesco Casisa, "Respiro," "Golden Door"), the 'sweet young boy' Rita's been romantically involved with since childhood, is nothing but a pretty face who would have things both ways. Even the film's bad guy, Don Salvo (Mario Pupella), is little more than a stick figure (as with "The Godfather's" Vito Corleone, Rita's dad gets in bad with the other Mafia heads when he rejects the drug trade). When Amenta's storytelling isn't playing like greatest hits, he's hitting us over the head. He begins his film with Rita's mother yelling at her to 'stir the sauce' as the young girl writes bold letters in red on a white sheet hanging from a clothesline. In fact, his ten year-old Rita is dressed primarily in white (the better to show up blood stains), the seventeen year-old in Sicilian mourning black and the briefly emancipated Rita in red, a passionate premonition. The film's climax screams of fictional sensationalism. At the film's end credits, the real life woman, Rita Atria, is shown in archival footage. If the filmmakers were going to identify her, why did they feel the need to change her last name and the name of her village in the film? It's a gripping story, but it's a small box film.

This inspired-by-a-true-story drama follows 10-year old Rita (Miriana Faja) in her idyllic young life in a peaceful Sicilian town. She adores her father, Don Michele (Marcello Mazzarella), a man respected by all and known for his kindness. His murder is a shock to Rita and her brother and they want revenge. Flash forward seven years and now 17-year old Rita (Veronica D’Agostino) is finally ready to avenge her father’s death. Her brother has insinuated himself into the mob and it is about to be made. It is a trap, though, and he joins his father. Since Don Michele’s death, Rita has kept a series of diaries documenting Mafia crimes in detail. After her brother’s murder, she flees the town and heads to the Sicilian capital, Palermo, where she hands over her journals to Prosecutor Paolo Borsellino (Gerard Jugnot). He tests the information, resulting in a big drug bust, and decides he has a treasure trove of evidence that will topple the Mafia infrastructure. This also means that Rita’s life is in danger and Borsellino puts her into the Witness Protection Program while he builds the state’s case against the Mafia. Veronica D’Agostino anchors this complex crime drama that is as much about the loss of innocence as it is about vengeance. Rita is a driven young woman who refuses to see the truth about Don Michele - he is not the saint that she believed. Part courtroom drama, part on-the-lam yarn, part vengeance is mine and part coming of age and understanding, this story, by director Marco Amenta, Sergio Donati and Gianni Romoli, brings us to a world unknown to all but who live there. We, in America, have a very different view of The Mafia – think “The Godfather.” Sicilian-born Amenta gives a very different view of the Cosa Nostra as it operates in the ancient crime lord-dominated Sicily, where the mob not only controls organized crime, it controls the local government, its bureaucrats and, even, the people. The film tells the story of a brave young woman who faces certain death, by Mafia hit men, but will not back down. Rita is a heroic figure and the first Mafia scion to seek justice for the victims of their heinous crimes. It is also about a daughter’s love for her father, even when she learns the truth about his criminal life. A complex story, fine acting on all levels, particularly D’Agostino, and a fascinating, violent subject matter make “The Sicilian Girl” solid, well-paced and, for me, an education.