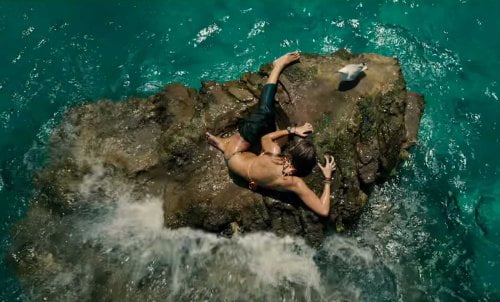 Nancy (Blake Lively) has traveled to a remote beach in Mexico – her late mom’s most favorite secret place – to surf the lagoon in her honor. She spends the day on the waves and, as dusk approaches, she makes one last run. It is a bad choice when she suddenly realizes that she has invaded the feeding ground for a Great White shark in “The Shallows.”

After losing her mother to cancer, medical student Nancy Adams (Blake Lively, "The Age of Adaline") needs to clear her head and reassess her career path. With the help of a local, Carlos (Óscar Jaenada, "The Losers," "Cantinflas"), she goes to the secret Mexican beach that her mother visited when she was expecting. It's a perfect day for surfing, but when Nancy inadvertently enters a great white shark's feeding grounds, she's seriously wounded and stranded on a rock 200 yards from the beach in "The Shallows." No one will accuse screenwriter Anthony Jaswinski ("Vanishing on 7th Street") of subtlety. Preposterousness maybe. But this ridiculously entertaining thriller works nonetheless, Lively investing her character with resolute will in a horrifying situation. Director Jaume Collet-Serra ("Orphan," "Non-Stop") exploits every aspect of his production for a tightly paced, immersive visit to Paradise under assault. To give Jaswinski credit, Nancy's backstory gives her odyssey some soul, her irresponsible traveling partner's hangover an explanation for her solo outing. Yet she's never entirely alone on the beach no one will name for her (Lord Howe Island between Australia and New Zealand stands in for the Mexican location). After readying her gear, she calls little sister Chloe (Sedona Legge) back in Texas, dad (Brett Cullen, "The Dark Knight Rises") getting on the phone to beg her return to medical school. Then there are the two surfers (Angelo Josue Lozano Corzo and Jose Manuel Trujillo Salas) already in the water. Nancy's only concern on a picture perfect day is theft as she stuffs her backpack into sea grass before heading out. The two other surfers are friendly guys, but Nancy decides to catch one last wave when they head in. As she glides atop a crest of water, we can see a huge shark heading towards her. It crashes into her board and she tumbles into the depths, dragging along the fire corral she'd been warned about. When she surfaces, she sees a whale carcass and swims to it, but the shark that's been feeding on it follows, ramming the whale. Nancy's forced to swim for it, climbing onto a rock that appears during low tide. Now she's loosing blood from a gaping bite wound in her thigh and the two other men drive off, not hearing her cries for help. But Nancy is the type of woman who is quite capable of helping herself, the medical knowledge that couldn't help her mom coming to her own aid. Alone, except for a seagull (Sully) she names Steven, its wing injured from a brush with the breaching brute, she begins to assess her surroundings, deeming a buoy too far, the shore impossible. Cinematographer Flavio Labiano ("Non-Stop") celebrates his stunning location and star, overhead shots magnifying both the pristine beauty of the surroundings and its isolation while underwater director of photography Simon Christidis highlights Lively's athleticism and vulnerability. A GoPro helmet camera worn by one of the other surfers adds to the visuals as do overlays of Nancy's watch face and cell phone display. Lively capably carries the entire film, resourceful and (mostly) calm until sheer fury overtakes her. Collet-Serra wisely keeps the camera tightly on her when the surfers return and enter the water, her warnings unheard, and the actress's face tells us everything we need to know. Taking a cue from "Jaws," the CGI great white is only gradually revealed, its full horror first seen in GoPro footage. Marco Beltrami's ("No Escape") score effectively adds to the tension without overpowering. Sia's 'Birds Set Free' is featured over the closing credits. Nancy's ultimate face-off with her foe may be the stuff of a credulity stretching "Jaws" sequel, but Lively is the real deal here and "The Shallows" is a beautifully crafted genre film. Grade:

I like Blake Lively but was a bit skeptical about seeing yet another man versus monster movie. That said, director Jaume Collet-Serra and his technical team have created a rousing adventure about survival and a one-woman show for its star. The storyline, mentioned above, is simple and straightforward. While the story travels a straight line, the filmmakers’ execution of the material is of the highest quality, particularly the above and below the waterline cinematography by Flavio Martinez Labiano. Water-borne films are always tougher to make than their land-based counterparts and “The Shallows” is almost constantly on the water, tensions heightened by the sudden appearances by Nancy’s enormous and hungry nemesis. The woman against nature tale has been done before but “The Shallows” makes the genre its own, mainly due to Lively’s empathetic and physically demanding performance and the technical acuity of Collet-Serra’s talented behind the camera team. This is a good leave your brain outside summer movie that, though it may not keep you out of the water like “Jaws” did decades ago, is a good alternative to any of the superheroes on the summer slate.