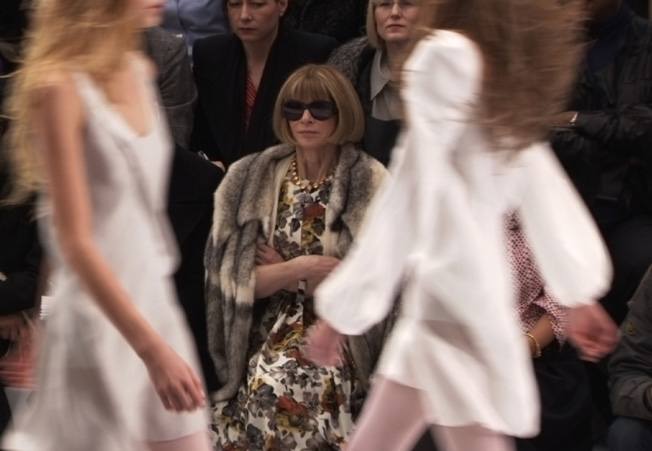 For twenty years, Anna Wintour has not only been the editor of Vogue but the empress of the fashion world. Even those with only passing knowledge of the $300 billion industry are aware of her icy image since Meryl Streep thinly satirized it in "The Devil Wears Prada." For the first time, a filmmaking crew has been given access to the hallowed halls of Vogue and director R.J. Cutler, who got into the thick of a political campaign with his "The War Room," documents Wintour and her staff as they pull together what has become known as their biggest magazine of the year, "The September Issue."

Here is a documentary which sounds fascinating - the first look into the inner workings of Vogue, direct access to the inscrutable Anna Wintour, beautiful models wearing beautiful clothes made to look even more beautiful by fashion magazine art direction and celebrity photographers - and yet, "The September Issue" is mostly a big bore that delivers on few of its promises. We learn from style.com's executive fashion director Candy Pratts Price that Vogue's September issue, which is described by its weight in pounds, is the 'January' of the fashion world, when everything changes,' and yet there is not one minute of the film that extrapolates this. Early on, Wintour talks about 'people who are afraid of fashion mocking it,' and yet her editor at large, frequently at her side, immediately dispels her words by his very appearance - here is a man who considers himself the utmost in personal style who we see taking a tennis lesson wrapped in a Louis Vuitton blanket - pretty mockable if not exactly scary. In Wintour's office we hear the somber reflection that in 2007, the jacket is the new coat (and I hope the speaker wore won all through a New York February). We are given an idea of Wintour's immense power when we see her arriving at fashion shows - all media immediately divert their attention to 'Anna!' - and yet even she seems taken aback when the CFO of Neiman Marcus asks Wintour to intervene to fix the now commonplace issue of late deliveries from design houses. With her trademark bob and frequent oversized sunglasses, Wintour retains a look something like the Cheshire cat crossed with the Mona Lisa and seems to say very little, yet what goes on in her mind is at the utmost of her entire staff's (shown repeatedly rifling through the racks of clothes which grace Vogue's corridors). Chief among those is Creative Director Grace Coddington, a former sixties supermodel retired early by a disfiguring car accident who is now considered the best in her field and who gains the obvious affection of Cutler's team (it's reciprocated when Coddington uses cinematographer Robert Richman ("My Architect") in one of her spreads). Beginning with a mass of red frizzy hair and ending in shoes obviously chosen for comfort, Coddington grouses as Wintour edits her work down to the bone (and so do we as Wintour seemingly dispenses with some of the loveliest shots with no real explanation as to why). Coddington is such an interesting subject, her life and work so extraordinary, that she takes over the film, eclipsing both Wintour and Vogue's titular issue (indeed, in the end, Coddington's work represents the bulk of it). Near film's end, Cutler finally gains the tiniest chink of insight into Wintour herself when she exhibits a ripple of self doubt, describing her siblings' varying politically correct careers and telling the camera that they are 'amused' by what she does. Her own daughter shows no predilection for following in mom's footsteps. We only ever get a sense of her relationship with staff with her interdependent, love-hate relationship with Coddington. You'd think that after "The Devil Wears Prada" we'd get more interaction with her office admins, but no, just a quick bit of efficient travel itinerary transfer. And so "The September Issue" documented in 2007 has come and gone and I have nary a clue as to what it changed nor, really, how it came into being. Cutler's inadvertent focus on Coddington suggests a conceptual change during filming stuffed into a pre-conceived marketing campaign.