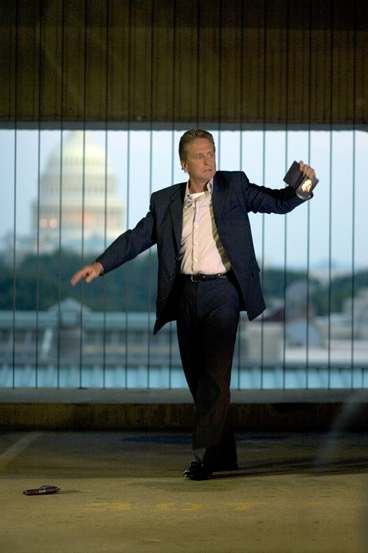 When the First Lady's Secret Service lead, Agent Pete Garrison (Michael Douglas, "Don't Say a Word," "The In-Laws"), becomes a suspect in an inside plot to assassinate the President, it is his former protege, David Breckinridge (Kiefer Sutherland, "Taking Lives," TV's "24"), and the young recruit he recommended, Jill Marin (Desperate housewife Eva Longoria), who lead up the investigation in "The Sentinel."

Director Clark Johnson ("S.W.A.T.") brings a little style to what is otherwise a pretty meat and potatoes presidential thriller with a solid if unexceptional cast. Anyone expecting a twist ending on the order of 1987's "No Way Out" will be sorely disappointed, although there is one early surprise that buttresses the plot. Characterization (George Nolfi, "Timeline," adapted the Gerald Petievich novel) is of the 'Garrison works by his gut, Breckinridge doesn't trust instinct' level, with both methods bearing up and Douglas and Sutherland are far from stretching in their roles here. The costars do create a believable amount of tension, but it dissipates all too quickly. Thanks partly to costumer Ellen Mirojnick ("Failure to Launch"), Kim Basinger ("Cellular") isn't implausible as First Lady and she and David Rasche ("Divine Secrets of the Ya-Ya Sisterhood," the upcoming "United 93") do a convincing job presenting a political united front and a behind the scenes estranged marriage of convenience. Longoria, who I expected to loathe in this role, is surprisingly effective if completely underutilized. Her character has little reason for existence, except as the object of Breckinridge's initial humorless hard assed behavior. Martin Donovan ("Saved!") hangs on a preposterous plot hook (the flipping of a coin making a 50/50 chance of the president's route a strong defense) as the Secret Service head and Blair Brown ("Dogville") is all brisk officiousness as the National Security Advisor. This is one of those movies where characters get moved around as if on a giant chessboard as the ho-hum plot unrolls, but it's kept interesting with some jazzy execution beginning with an opening credit sequence that combines real life footage of the Reagan shooting with the graphical displays and audio noise of the threats which are investigated daily in Breckinridge's bureau. The sequence ends with a dissolve from the president's prone body to Garrison, one of the agents who helped save him twenty years prior, waking from a fetal, agitated sleep. Christophe Beck's ("Ice Princess," "The Pink Panther") atypical score helps keep blandness from setting in as well. "The Sentinel" is no classic of the genre, just serviceable entertainment served up lightly spiced.