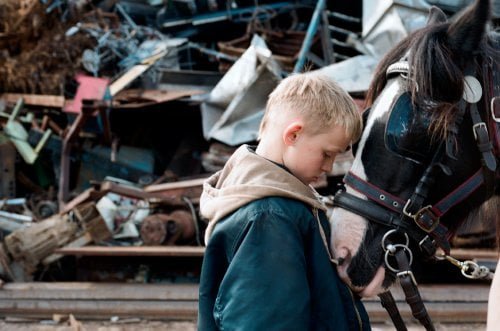 One night, hyperactive 11 year-old Arbor (Conner Chapman) and his mate Swifty (Shaun Thomas) spy men stealing copper railway wire and the young boy decides that becoming a scrapper is the life for him. After being expelled from school, the boys steal a spool of cable from some telcom workers and approach local metal yard dealer Kitten (Sean Gilder) to sell it. But when Arbor steals copper from Kitten to sell to another yard, Kitten demands repayment with an illegal and dangerous job in "The Selfish Giant."

Writer/director Clio Barnard makes her feature debut with a fable spawned from an Oscar Wilde children's story but plays more like a pint sized "Of Mice and Men." Barnard attains heart breaking performances from the untried Chapman and Thomas in a story that, like her documentary "The Arbor," is set in an economically depressed northern England. At Arbor's home, his drug addicted older brother has just sold the younger boy's medication. Swifty has an even direr home life, his dad Price Drop (Steve Evets, "Brighton Rock") having lost their couch to debt collectors. But Swifty's the happier lad, reveling in the local cob horses which pull the two-wheeled sulky carts the scrappers use when they're not participating in road races. Arbor, determined to be a respected, wage-earning adult, is dismayed when Kitten notes Swifty's equine ability and turns his attentions to the older boy, grooming him for the races. Barnard and her director of photography Mike Eley ("Nanny McPhee Returns") find an industrial landscape which is at odds with itself - sheep grazing on meadows backed by an old power station - that defines her two protagonists. Arbor is rash, so excited by the prospects of a downed live electrical cable he begins to lead a foal towards it to gauge the danger. A horrified Swifty keeps him in check, calming the creature, in a scene loaded with portent. (Eley will also visualize Arbor's arc by repeating a shallow focus shot of Diesel with Swifty with the younger actor.) When tragedy eventually strikes, Barnard delivers it with a shocking jolt. If "The Selfish Giant" has a weakness, it is that the adults in the film are not as finely drawn as the boys. Kitten has a licensed yard, but turns a blind eye to obviously stolen goods and yet when he's faced with a larger moral dilemma, he seems to go against his rough and greedy character too abruptly. As his wife Mary, Lorraine Ashbourne is almost angelic, a happy nurturer. Rebecca Manley is harried yet supportive as Arbor's mom, but seems overall the average middle-class housewife. Only Siobhan Finneran ('Downton Abbey's' O'Brien) truly stand out among the adults, Swifty's mom almost a specter in her own overcrowded household, a haunted figure, but one still full of maternal love. Barnard is shaping up to be the 21st century answer to Britain's kitchen sink dramas of the '50's and '60's with her 'angry' characters and compassionate approach to lives lived below the radar.