The Secret of the Grain (La Graine et le Mulet) 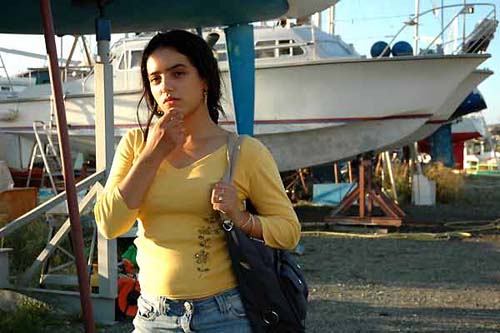 In the port town of Sète, Slimane Beiji (Habib Boufares) is being pushed out of his 35 year job at the shipyard. His ex-wife and daughter have little use for the fresh fish he can provide in lieu of wages as their freezers are full of little else. But the daughter of his lover Latifa (Hatika Karaoui), who also runs the faded hotel he now lives in, expresses joy at the sight of the mullet and it is she, Rym (Hafsia Herzi), who encourages his new endeavor - to open a floating restaurant specializing in North African couscous - in "The Secret and the Grain."

In his third film, a surprise Cesar winner over "La Vie en Rose," Tunisian born Abdellatif Kechiche ("Games of Love and Chance") continues to explore the lives of North African immigrants in France, much like Fatih Akim is doing in Germany. But here he also cozies up to French director Laurent Cantet with this tale of a man's struggle to retain his livelihood. With its huge cast of characters comprised of two separate families joined by one man and the various French citizens they all come into contact with, "The Secret of the Grain" is a boisterous, sprawling affair with time outs for small intimacies and a last act that defies expectations. Although Slimane has made a new life, he stays connected to his old one, visiting ex-wife Souad (Bouraouia Marzouk) regularly, although she claims no use for him. His children are a handful. Bossy daughter Karima (Farida Benkhetache) is outspoken and argues with her husband over his more laid back approach to parenting. Eldest son Majid (Sami Zitouni) is a womanizer who leaves his Russian wife Julia (Alice Houri) alone too much with their baby. The youngest, Riadh (Mohamed Benabdeslem), is the quietest and most open to Slimane's new life, perhaps because of his attraction to Rym. Souad, of course, does not recognize Slimane's new women, especially on Sundays when family, friends and neighbors gather to partake of her famous couscous (Kechiche makes a spectacle of this, with a hysterical Julia being coaxed downstairs by Karima and latecomers finding place at table). Majid and Riadh bring a plate to Slimane and Rym praises Souad's talents, so when Slimane buys an old boat to convert into a restaurant, she becomes his biggest backer. This begins a journey through a frustratingly circular, Kafkaesque bureaucracy of permits all of which seem to require the existence of another before each can be granted. Rym becomes quite adept at playing the game, though, and she and Slimane decide to invite Sète's movers and shakers to a trial run of sorts in order to secure the business. As French officials and local business people begin to arrive, all looks assured, until Majid spies a lover - the wife of one of Slimane's much needed contacts. "The Secret of the Grain" (the French title actually translates to "The Seed and the Mullet") isn't a film that fits into an easy compartment. It's part extensive family yarn, shot in fly on the wall fashion. It's also about a man in between two women and two lives. It could be described as a North African "Big Night." And yet, the last act, where Kechiche slows down the action so that it feels like real time (in order that the audience feel the long, long wait of the characters), it becomes a tragicomedy. It's as messy as life and it's glorious. Habib Boufares is a taciturn a hero, but the actor makes Slimane's innate decency shine through and we have a great investment in his success. Hafsia Herzi, who won a Best Newcomer Cesar for this film, is a force of nature, a screen natural. Her last act forestalling belly dance not only continues, and continues, and continues to entertain, we can feel every drop of sweat she puts into it. The women, who clearly maintain separate camps, really dominate the film. "The Secret of the Grain" is a gloriously messy slice of life that celebrates a culture trying to maintain a foothold in its adopted land. It's a film that lingers long after you've seen it.