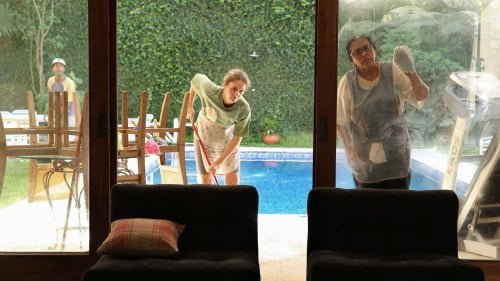 Val (Regina Casé, "Me You Them") is the live-in housekeeper for a São Paulo doctor and his style maven wife. She raised their now teenaged son Fabinho (Michel Joelsas, "The Year My Parents Went on Vacation"). When the daughter, Jessica (Camila Márdila), she hasn't seen in ten years, having had to leave her behind in Recife, calls to say she's coming to the city to take college entrance exams, at first Dona Bárbara (Karine Teles, "Madame Satã") is very supportive of the idea, but Jessica refuses to respect the home's unspoken class barriers in a society where many are "The Second Mother."

Maids have been a popular South American cinematic entry into social issues with Brazil's "Live-In Maid" showing the staunch friendship that forms between a once wealthy woman and the housekeeper she can no longer afford to pay while Chile's "The Maid" showcases a disturbed domestic staunchly defending her territory. Now writer/director/producer Anna Muylaert (writer "The Year My Parents Went on Vacation") addresses the subject as not only a corrective to class divisions, but a wakeup call on parenting. Featuring an outstanding performance from Casé and a global breakthrough for Márdila, "The Second Mother" is a must see for cinephiles. Beginning with a flashback of Val with the young Fabinho by the family swimming pool, the first thing we notice is director of photography Barbara Alvarez's unusual shooting style. Keeping her camera mostly static (there are a few pans and even fewer zooms) with a widescreen composition, Muylaert and her editor (Karen Harley) create energy within the frame through blocking and the juxtaposition of camera angles. It's as if we're watching a social experiment play out. Although we will later learn Dr. Carlos (Lourenço Mutarelli), who sports various rock tees, believes he's running the show (he'll tell Jessica that 'they dance, but I'm the DJ'), this home is dominated by its women. Val is the first up, preparing breakfast, coddling 'her boy,' before spending the rest of her day cleaning. She proudly presents Dona Bárbara with a gift on her birthday (the modern black and white espresso set is quite symbolic - watch those cups and saucers), and the two women appear to be quite close, but when Val tells her boss she's heard from Jessica, Bárbara has no idea who she is talking about. Val is beyond joyful when Jessica arrives, but the young woman is quite put out that she will be going to her mother's employer's home. She immediately connects with Carlos and gives her a tour of the house. All the bedrooms are suites, including an empty guest room, except for Val;s and with some artful hint dropping, Jessica is invited to move into the guest room, much to her mother's dismay. The next thing Val knows, she's serving lunch to her own daughter and noting the hardening eyes and tightening mouth of Bárbara. Jessica refuses to acknowledge her status and when she's pulled into the pool by Fabinho and his friend, Bárbara immediately calls the pool man to have it drained - she's seen a rat she says. Muylaert has fashioned her screenplay with layers upon layers, Jessica's appearance upsetting the status quo in more ways than one, and she wraps it most satisfyingly across social and generational gaps, presenting a new paradigm for the Brazilian way of life. Production designer Thales Junqueira (Neighboring Sounds's assistant art director) takes Jessica's chosen field of architecture and runs with it, the Carlos's home a literal upstairs/downstairs, a fishbowl on one level, a subterranean hive below, the outdoors itself a class boundary. Casé is empathetic and comical, her miming and waving of hands both an expression of her upbringing and her distress. Muylaert has written her character as a polar opposite of Jessica's, but the two actresses gradually bring them together, Jessica's refusal to 'behave' eventually proven. Márdila is at first off putting, but the actress (and her director) makes gradual and subtle revelations. Teles could have come off as merely a villain, but in Maylaert's scheme, her own insecurities fuel much of her anger. "The Second Mother" is an outstanding, female driven film from Brazil. It's thought provoking, artful and hugely entertaining. Grade: