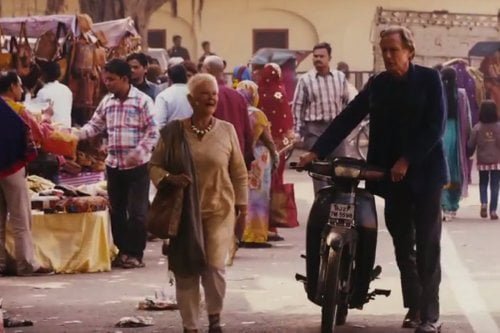 Although they are still in the process of renovating their initial hotel for the 'Elderly & Beautiful,' odd partners Sonny Kapoor (Dev Patel) and Muriel Donnelly (Maggie Smith) have traveled to San Diego to meet with Evergreen senior living community executive Ty Burley (David Strathairn) for investment funds for needed expansion into "The Second Best Exotic Marigold Hotel."

Director John Madden, screenwriter Ol Parker and the original cast return for a second helping of romance, new beginnings and crossed wires in an overstuffed sequel that nonetheless is a bit more satisfying that the first. We already know these characters who are all moving forward with the life changes their first adventure set into action and as their perspectives broaden, so do their travel horizons, with hotel's management venturing to San Diego while Evelyn Greenslade (Judi Dench) and the smitten Douglas Ainslie (Bill Nighy) find themselves not connecting in Mumbai. The film has been sectioned into three acts corresponding to Sonny's upcoming wedding to Sunaina (Tina Desai). The first revolves around the engagement party and Sonny's hoped for acquisition of the Superior Quality Hotel. The clownish young entrepreneur upsets his bride-to-be with his rude treatment of new guest Lavinia Beech (Tamsin Greig, Showtime's 'Episodes'), there to scout out the property for her mother, in favor of Guy Chambers (Richard Gere), the man Sonny is certain is Burley's hotel inspector. He's unsettled by the presence of Sunaina's brother's very good looking friend Kushal (Shazad Latif), who's been choreographing the sexy dance number for their party, as well as Guy's obvious interest in his mother, Mrs. Kapoor (Lillete Dubey). Evelyn is offered a big job sourcing fabrics, one which will entail a lot of travel, while she's still skittish in her personal life about the obvious attraction with the (still married) Douglas. Playboy Norman (Ronald Pickup) inadvertently sets up a hit on his amour Carol (Diana Hardcastle) with a tuk tuk driver, then must come to grips with what the idea of losing her might mean. His like-minded partner in the struggling ex-pat Viceroy Club, Madge Hardcastle (Celia Imrie), is pitting two Maharajahs against each other with herself as the prize as her loyal driver Babul (Rajesh Tailang, "Siddharth") observes from the sidelines. Mrs. Donnelly quietly faces a health issue as she gently guides Sonny, allowing him to make mistakes she's confident he'll resolve on his own. As we work our way through the 'family party' (how this is different than the first one isn't really explained) towards the wedding, Madden largely keeps his arms around the proliferating plot threads, but can't quite keep some of the stuffing from bulging out and blowing away. Dench, Nighy, Smith and Patel's (the latter two as much a couple as Sonny and Sunaina) stories are the strongest with the rest of the cast offering humorous flourishes (or, as in the case of Greig, left out in the cold). Gere's pairing with Dubey is handled too abruptly, the actor's presence more organic to Madge's lusty fantasies. And while there seems to be a story behind Burley's interest in Donnelly, no one's bothered to tell it here. Penelope Wilton makes a surprise appearance and, even more surprisingly, is given the chance to create some sympathy for her shrewish Jean. Subhrajyoti Barat and Tailang contribute solid support as Evelyn's cashmere dealer turned partner and Madge's confidant. The climactic Bollywood dance number allows the cast to gather together to witness Sonny's triumph as one of their own narrates good wishes and advice in solitude. Madden goes full circle with a final image that brings us back to a reconfigured beginning. "The Second Best Exotic Marigold Hotel" is a big, bright mess of a movie whose cast and locales distract from its screenwriting lapses. Grade: