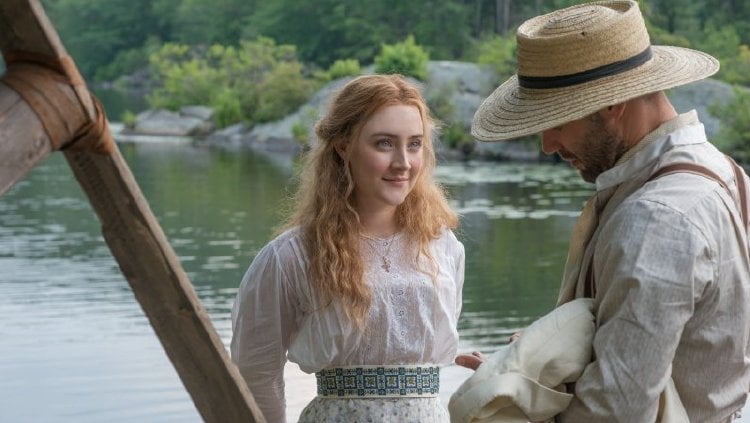 Konstantin (Ronan's "On Chesil Beach" costar Billy Howle) is anxious about unveiling his new play, one which defies classical norms, at the country home he shares with his Uncle Sorin (Brian Dennehy). It will star the young neighbor, Nina (Saoirse Ronan), whom he is in love with. But his audience contains his mother, famous classical actress Irina Arkadina (Annette Bening), and her younger lover, famous writer Boris Trigorin (Corey Stoll), and her disparaging remarks and his pull on the star struck Nina result in tragedy in "The Seagull."

Remember how Kenneth Branagh made Shakespeare come alive for modern audiences? Well, director Michael Mayer (2004's "A Home at the End of the World") and screenwriter Stephen Karam ('The Humans' Tony-winning playwright) have done something similar for Anton Chekhov in a quick stepping adaptation featuring a fabulous cast. The film isn't perfect, its takeoff and touchdown both problematic, but everything in between is a smooth, pleasurable ride. Chekhov's play comments upon artistic creation, unrequited love and the sophistication of the city versus the contemplative nature of the country. While Irina worships the tried and true (like Shakespeare), her son looks to break down barriers towards new formats and her much feted lover feels compelled to keep producing work which never satisfies him. Konstantin loves Nina who falls in love with Trigorin who loves whichever of the two women are in front of him. The daughter of estate manager Shamrayev (Glenn Fleshler), Masha (Elisabeth Moss), obsesses over Konstantin while spurning schoolteacher Mikhail (Michael Zegen) whose love is unwavering. Shamrayev's wife Polina (Mare Winningham) pines for Doctor Dorn (Jon Tenney) who still carries a torch for Irina. Sorin rues his single status as his health declines. Irina quickly becomes bored in the country, yet ensures her son and brother cannot follow her back to Moscow. Shamrayev frustrates all with his management of their horses. One of the pluses of the new adaptation is the sly humor they've pulled from Chekhov's words (the adaptation is mostly faithful, adding stage direction and a couple of additional scenes for Irina), especially from the characters of Irina and, more surprisingly, Masha. Irina's self absorption and miserliness are amusing in Bening's capable hands without undercutting the effects of her actions. When Sorin suggests Irina sing and she demurs, Konstantin offers Nina before an abrupt cut to his mother warbling for the assembled. Moss, dressed in black while mourning for her life, is cheeky sniffing snuff and tippling vodka, her morose comments delivered with a self aware barb. The look she shoots Nina, whose innocent response, 'Why?,' to a request to complete reciting Konstantin's play is loaded for all but her, is priceless. Mayer opens the play up to include the lake upon which it is set, Trigorin rowing first Irina then Nina on its waters. It is upon return from the latter trip that Konstantin presents Nina with the titular bird, which he has shot in a symbolic and foreshadowing gesture (the translation of the title from the Russian, Chayka, is both a lake bird and a seagull). Mayer's choice to begin his film with a preview of Act IV is unnecessary, but it does afford cinematographer Matthew J. Lloyd's warm, natural evening lighting to burst into Act I's daylight like a curtain rising on the action. His decision to end Act IV without Dorn's final words may give Bening a moment, but might confuse audiences unfamiliar with Checkov's work. Still, Mayer's 98 minutes are more entertaining and might even gives us more to chew on than Sidney Lumet's 141 minute 1968 adaptation. Grade: