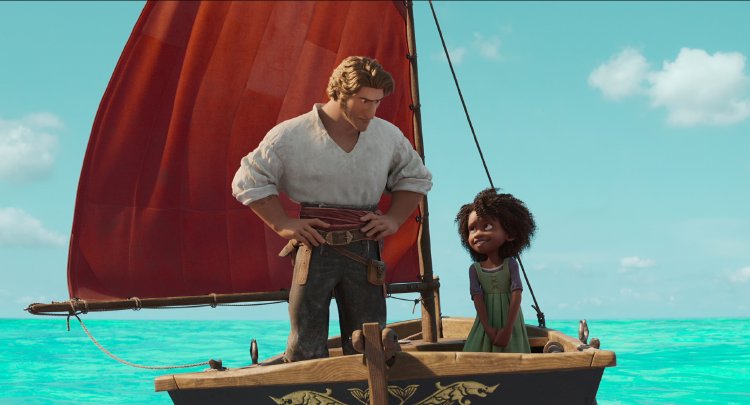 Orphaned Maisie Brumble (voice of Zaris-Angel Hator, "Morbius") has always believed her parents, lancers on the Monarch, were heroes, two of many hunters which kept monsters from their shores, history related in her favorite book outlining the adventures of Captain Crow (voice of Jared Harris).  When the Queen demands the horn of the most fearsome, the Red Bluster, Maisie stows away on Crow’s ship Inevitable.  A horrific sea battle finds her and shipmate Jacob Holland (voice of Karl Urban) swallowed whole, but Maisie’s opinion begins to evolve on “The Sea Beast.”

It will be no surprise that cowriter (with Nell Benjamin)/director Chris Williams (“Bolt,” “Moana”) cut his teeth at Disney, his film taking a page from everything from his own “Moana” to “Peter Pan” to “Pinocchio.”  But it also cribs heavily from “How to Train Your Dragon” in everything from the Toothless-like Red Bluster’s design and acquiescence to human piloting to the sea creatures’ whimsical species names.  Until the film’s bracing condemnation of royalists’ exploitation and dishonesty during its rousing conclusion, there are few surprises along the way, but “The Sea Beast” features some stunning animation, rousing action scenes and colorful vocal performances.

Take the film’s opening scene, which establishes Jacob as a child thrown overboard from a ship ablaze and engaged with a sea monster during a violent storm.  Those mountainous waves look real, the roiling sea treacherous as the ship that was Jacob’s safe haven is engulfed in orange flames and scaly green extremities.  After a quick stop to meet Maisie reading about his exploits to others in her orphanage, we’re shuttled to the deck of Crow’s ship just as the Jacob sights a Brickleback.  After intense engagement, the Ahab-like Captain, who took Jacob in as a boy, surprises his crew by ordering them to return home, where they will learn that they will no longer be supported by the King and Queen, who have instead commissioned a Royal Navy ship (under the command of a supercilious officer voiced by Dan Stevens) to keep the beasts at bay.  Crow immediately points how faults in the Imperator’s design and suggests a contest between the Navy and the hunters to capture the Bluster.

After their rowboat is swallowed, Maisie and Jacob are eventually ejected from the Bluster in a violent sneeze which deposits them on an island where various beasties (a yellow walrus-like creature and giant purple crab among others) lay their eggs.  Maisie quickly adopts a goofy looking puppy-sized hatchling she names Blue, but Jacob still isn’t having any of it, at least until Maisie proves her theory that the Red Bluster was actually coming to their rescue and can get them off the island.

The film has various worthy messages for children (and maybe even adults) amidst its spirited adventures and a delightful heroine in Maisie.  Jared Harris appears to revel is his bellowing force of sea captain without succumbing to ocean going cliché, walking a fine line between obsession and sense.  Williams has articulated an entertainingly ironic divide between Crow’s amusement and Jacob’s exasperation with Maisie.  Also notable is Marianne Jean-Baptiste’s fierce reading of First Mate Sarah Sharpe.

The Hunters have the most dangerous mission - eliminate all of the monsters that once upon a time, as legend has it, raided and destroyed their villages and killed the inhabitants. Budding senior hunter, Jacob (Karl Urban), sets his sights on the destruction of the biggest monster of them all in “The Sea Beast.”

This is an entreating concoction of stories and myths ranging from the obvious one – Moby Dick – to the more modern, and just as obvious, ”How to Train Your Dragon (2010).” As such, we get a rousing action adventure yarn with the heroic Hunter, Jacob, vowing to destroy all monsters. But, there is also Maisie (Zaris-Angel Hator), a hunter-to-be but with a smart and inquisitive mind who realizes that it ain’t the sea beasts that are bad, it is man and his narrow-minded “legends.”

Being like Moby Dick and “How to Train Your Dragon” is not necessarily a bad thing but there is a lot to be said for originality too, which is lacking here. The CGI animation is eye-hurting realistic with the natural flow and movement, combined with the more traditional-looking inhabitants of that world.

If you and the family are looking for an entertaining, animated action adventure, “The Sea Beast” will fit the bill. Be aware, though, that the subject may be scary for smaller kids.