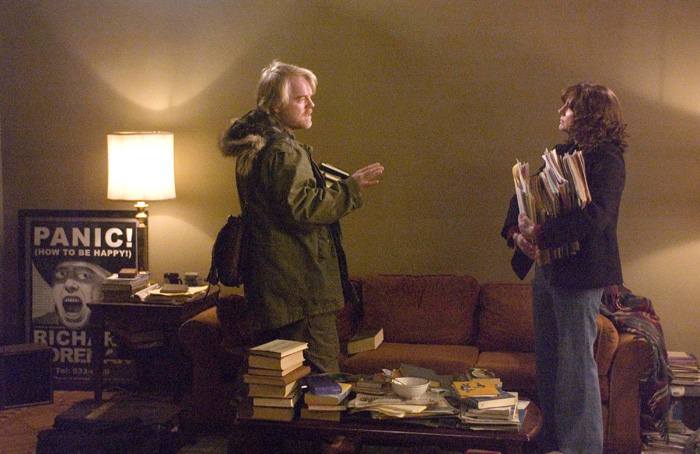 When single aspiring NYC playwright Wendy (Laura Linney, "Breach," "The Nanny Diaries") gets a phone call from Arizona detailing her father's onset with dementia, she calls her childhood comrade-in-arms, brother Jon (Philip Seymour Hoffman, "Capote"), a literary professor in Buffalo, in hysterics. Jon takes the news in stride and the brother and sister travel to Sun City, Arizona for the long-delayed reunion of "The Savages."

Writer/director Tamara Jenkins ("Slums of Beverly Hills") started with her own experience with an aging parent to fashion this dual character study of two alienated siblings with an ironic interdependency. If the film ultimately feels small, Linney and Hoffman, two of our great actors, always keep it interesting. A whimsical opening credit sequence features dancing seniors in the well manicured elder community of Sun City where Lenny Savage (Philip Bosco, "Freedomland," TV's "Damages") acts out upon his caregiver's refusal to flush a toilet. When Lenny's elderly girlfriend dies, her children inform Wendy and Jon that, although they have great affection for their father, he is now homeless. Jon leaves Wendy to get their dad back to Buffalo while he goes ahead to secure space in a nursing home. After an excruciatingly embarrassing plane trip with dad, Wendy begins to overcompensate, showing much more concern than the relationship would seem to warrant. Wendy is horrified by the institutional nursing home Jon has found and tries to brighten it up with personal touches. She is also now living with her brother, who after three years in a relationship with Kasia (Cara Seymour, "American Psycho," "Hotel Rwanda"), will not commit when her Visa expires, yet cries at the thought of losing her. Meanwhile, Wendy is in a directionless affair with her married next-door neighbor Larry (Peter Friedman, "Freedomland") who drives out from the city to visit her. The siblings' relationship is driven by an intellectual competitiveness that never really surfaces. Jon is working on a book about Bertolt Brecht while Wendy produces unpublished plays and supports herself as a temp. When Jon questions her financial ability to up and move to Buffalo for weeks on end, Wendy boasts of having won a grant - the elusive Guggenheim her brother cannot achieve. The real story is both pitiful and telling, but the underlying envy evolves into a support that allows each to face adulthood, and the actors' gradual shedding of protective layers allows us to buy into the siblings' changing attitudes. The emotional state of these two lost souls is writ all over the production design, the vibrant hues of Sun City giving way to the dreariness of winter in Buffalo in the old shambling home of a single college professor with no aptitude for furnishing (Wendy's city apartment's most notable decor is her cat, the branding of a single woman destined for spinsterhood). Boxes of Wheat Chex and Post Cereal prove the only connective tissue between the two generations of Savages. A joyless Buffalo hotel room connects Wendy with the hopelessness of her affair. Linney gives an air of desperation to Wendy's seeming take charge responsibility that exposes the character's inability to take charge of her own life while Hoffman makes Jon's practicality and dismissive ness of sentimentality the outer shell of a man rejecting his emotional well being. The opposing forces are clearly and hilariously put forth in a scene where Wendy dithers over the wording of a greeting card. Bosco can also be amusing as he drifts in and out of comprehension, declaring obvious truths without embellishment. He is an object adrift on the self-involvement of his children. Gbenga Akinnagbe of HBO's "The Wire" is engaging as an immigrant caregiver who encourages Wendy and becomes the misplaced focus of her affection. In the end, Jenkins has placed her siblings on confident paths with their characteristics intact. Jon's still focused on the same literary obscurities, but his studies are taking him to Poland, Where Kasia now lives. Wendy is in the thick of producing her first play in New York, but her propensity to overindulge a seeming lost cause this time has a happy ending.