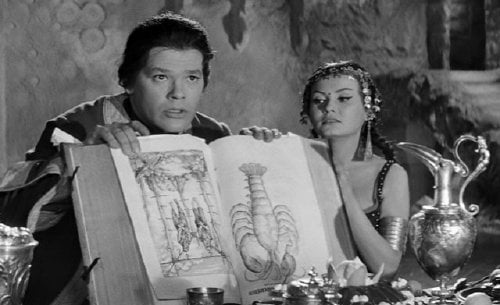 During the Napoleonic War, a young officer is captured by the enemy as he tries to read a book. His kindred-spirited captor tells him it is the story of his prisoner’s grandfather, Alphons van Worden (Zbigniew Cybluski), a Walloon guard captain on a solitary quest across Spain. He stops to rest at the inn at Venta Quemada where the innkeeper refuses to stay the night because of ghosts. Our hero, Alphons, will test his courage in just one of the stories in “The Saragossa Manuscript.”

A battle during the Napoleonic Wars in the town of Saragossa leads an officer to take cover in an inn where he finds an illustrated book, opening to pictures of two men hanging and two women embracing on a bed. When an enemy officer finds the man, he's distracted from arresting him when he realizes that a man mentioned in the book's text, Alfonse Van Worden (Zbigniew Cybulski, "Ashes and Diamonds," "How To Be Loved"), was his grandfather and the two fall into the mind bending tales of "The Saragossa Manuscript." Polish director Wojciech Has reaches the epitome of his dazzling talent for warping cinematic time in this three hour epic, a giddy, almost unclassifiable work with elements from such disparate genre works as "The Brides of Dracula" to swashbucklers and European sex farces. Has's movie, adapted from Jan Potocki's novel by Tadeusz Kwiatkowski, goes down so many rabbit holes as he skips from one individual tale to the next, one wonders if one will become utterly lost, but we're in the hands of a master who has an uncanny ability to pull the rabbit out of a hat. Has uses so many inventive devices to switch gears, I literally laughed out loud in sheer delight at his filmmaking skill. The first level down is one we continually return to. Van Worden makes his way through a mystical Andalusian landscape with two servants who warn him not to proceed into haunted territory, but he forges ahead stopping at the Venta Quemada inn where he's led by a bare-breasted woman into a cavernous, Moorish looking room. There he meets two princesses who inform him that he is their cousin and he must convert to Islam and marry both of them to produce heirs. He's given a skull shaped goblet, but after he drinks, he awakens outside, disoriented, his two servants hanging from gallows. Van Woorden remains a constant, hunted by the Spanish Inquisition as one character after another is introduced to the film. Tales of romance, adultery, madness, commerce, opportunism and bravery dovetail into one another, creating an experience that's like a psychedelic immersion into an alternate history - is it any wonder this was Jerry Garcia's favorite film? Cinematographer Mieczyslaw Jahoda employs Has's favored tracking shots, often tracking subjects obscured by buildings or marketplace stalls. The extensive cast, many of whom will be recognized from Has's earlier works, create such unique individuals they help keep us grounded in Has's ever shifting sands. "The Saragossa Manuscript" is a 182 minute epic that's so continually engaging, it could have gone on for another hour or two without wearing out its welcome. Grade:

This is a formulaic rags-to-riches story that benefits from a couple of things. First, the music used is superb. As Dave puts it “90% of music is shite. The other 10% is soul.” And, he’s right. The terrific songs – like Marvin Gaye’s classic I Heard It Through the Grapevine - performed by the girls makes things move quickly. The other plus is a charismatic performance by Chris O’Dowd, whose love of soul music is infectious and enthusiasm is palpable. The actor has always been a supporting actor but he embraces Dave in such a way that he is the “soul” of this movie. The four young ladies who provide the songs – Debor Mailman as eldest Gail, Jessica Mauboy as youngest Julia, Shari Sebbens as Kay and Miranda Tapsell as Cynthia - are sweet but really just window dressing. They form the supporting ensemble to Dave’s wacky leadership but only one of the girls, Gail, is given any dimension. When they land in Vietnam, he makes some very bad decisions – like having the girls travel into the war zone for a gig but without armed escort. This make for one of the few suspenseful moments in “The Sapphires,” which is really a feel good movie celebrating soul music. The techs are well done but not remarkable. I noticed that nearly every piece of military equipment was in pristine condition, as if just off the 1960s shelf, showing the filmmakers are sincere in attention to period details. Costume is primarily centered on the Sapphires’ on-stage wardrobe and Dave’s scruffy look. If you love the music of Motown and enjoy a feel good success flick, then “The Sapphires” fits the bill.