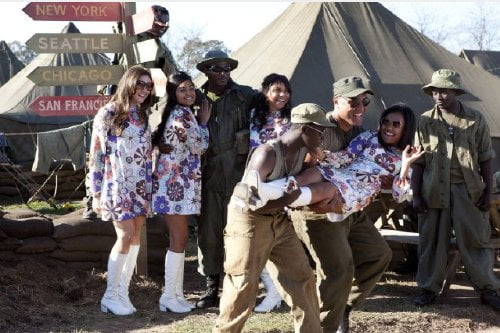 In 1968, the world had gone crazy with assassinations, protests everywhere and the Vietnam War. But, for four aboriginal girls, sisters and cousins, it is their chance to do the thing they love – sing. A music agent, laid back Dave Lovelace (Chris O’Dowd) who is passionate about soul music, sees the girls perform at a country-western club in the Australian outback. This chance meeting will bring him and the girls together and propel them all to the shores of Vietnam to play soul for the troops as “The Sapphires.”

Julie (Jessica Mauboy, 2006's Australian Idol runner up) is determined to perform at a rural Australian township's talent contest with her singing sisters Gail (Deborah Mailman, "Bran Nue Dae") and Cynthia (Miranda Tapsell) even though their mum forbids it because of her young age. But she's the lead and she hitches in after the others and the trio's rendition of Country & Western tunes is clearly the winner. But they are Aborigines and, therefore, sneered at by all but one - the bar's Irish piano player Dave Lovelace (Chris O'Dowd, "Bridesmaids"). He tells them they've got to ditch the C&W for Soul. Julie tells him about an audition to play for the troops in Vietnam. Dave becomes their manager and they, along with their cousin Kay (Shari Sebbens) who's been passing for white in Melbourne, become "The Sapphires." You've seen this type of tale many times before and television director Wayne Blair's transition to the big screen can be a bit shaky, but the inspired-by-a-true-story Aboriginal slant adds interest, the actresses create unique characters and Chris O'Dowd really shines. It is still shocking to see how open racial hatred was in 1968, but all Dave cares about is the music and the Irishman is a born Blues man. There is all kinds of humor to be mined from a white foreigner trying to turn some Aboriginal girls into an act for the Apollo against their own predilections and each has different strengths and weaknesses which must be refined into a cohesive whole. Julie is the obvious front woman, Gail the sexpot and Cynthia the dancing queen, but where does Gail fit in? The eldest is used to running the show, making for some natural sparks between her and Dave. Once they get to Saigon, the new girl group blows the roof off and so they're sent out on tour. It's here that Gail comes into her own as the maternal protector and her friction with Dave combusts. Mailman has the ability to project both fire and a lack of confidence and creates a beautiful slow burn romance with O'Dowd that's as natural as breathing. The film's climax is a one-two punch, but only one of them lands. When the base The Sapphires are at comes under attack, they're suddenly on their own and in trying to get to safety, Dave is left behind, his fate precarious. Unfortunately, Blair undersells here and we're never in any doubt that Dave will return. Better follows when the girls make it back to Saigon and are asked to perform to quell racial tensions in the aftermath of Martin Luther King's assassination and they must do this believing their manager, friend and lover is dead. The film's production feels small in scale, but the musical numbers grow in power, featuring such hits as 'I’ll Take You There,' 'What a Man' and 'I Can’t Help Myself.' O'Dowd may not sing, but he provides most of the film's humor and makes Dave just as much a character to root for as the group themselves. "The Sapphires" wraps softly, with end credits updating the fates of the real women behind the story. That 1968 USO tour proved the height of their fame, but not the last of their accomplishments.

This is a formulaic rags-to-riches story that benefits from a couple of things. First, the music used is superb. As Dave puts it “90% of music is shite. The other 10% is soul.” And, he’s right. The terrific songs – like Marvin Gaye’s classic I Heard It Through the Grapevine - performed by the girls makes things move quickly. The other plus is a charismatic performance by Chris O’Dowd, whose love of soul music is infectious and enthusiasm is palpable. The actor has always been a supporting actor but he embraces Dave in such a way that he is the “soul” of this movie. The four young ladies who provide the songs – Debor Mailman as eldest Gail, Jessica Mauboy as youngest Julia, Shari Sebbens as Kay and Miranda Tapsell as Cynthia - are sweet but really just window dressing. They form the supporting ensemble to Dave’s wacky leadership but only one of the girls, Gail, is given any dimension. When they land in Vietnam, he makes some very bad decisions – like having the girls travel into the war zone for a gig but without armed escort. This make for one of the few suspenseful moments in “The Sapphires,” which is really a feel good movie celebrating soul music. The techs are well done but not remarkable. I noticed that nearly every piece of military equipment was in pristine condition, as if just off the 1960s shelf, showing the filmmakers are sincere in attention to period details. Costume is primarily centered on the Sapphires’ on-stage wardrobe and Dave’s scruffy look. If you love the music of Motown and enjoy a feel good success flick, then “The Sapphires” fits the bill.