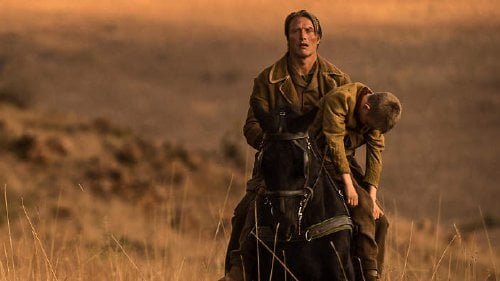 Ex-soldier Jon (Mads Mikkelsen) and his brother Peter (Mikael Persbrandt) left their native, war torn Denmark to find freedom and prosperity in the American west. After seven long years he is finally able to bring his wife and son across the Atlantic for a reunion. Soon, though, things will take a violent and deadly turn that will force Jon to find “The Salvation.”

Jon is a man who has worked hard, with Peter, to make a comfortable life for his family in America. His hopes and plans for the future are dashed by the brutality of the brother of the leader of an outlaw gang, Delarue (Jeffrey Dean Morgan, metaphorically twirling his moustache in evil glee), who controls the local town, including its elders. There is also a scarred femme fatale, Madelaine (Eva Green), the wife of Delarue’s brother, who murdered Jon’s wife and son Mads’s character is the strong silent type whose thirst for revenge simmers just below his outwardly calm surface. The actor handles the action sequences and shootouts deftly but his character is too enigmatic, keeping the viewer at arms’ length. Eva Green as mute Madelaine proves she can create a sympathetic character without uttering a word. The rest of the cast lacks any distinctive characters. Instead, most are clichéd. The film does have a good western production design and cinematographer Jens Schlosser gives the film a stark, almost bleak look commensurate with the story. “The Salvation” has all the elements of a classic western but here is something missing – the soul or the spirit of the western genre. I wonder what John Ford, Akira Kurosawa or Sergio Leone would have done.