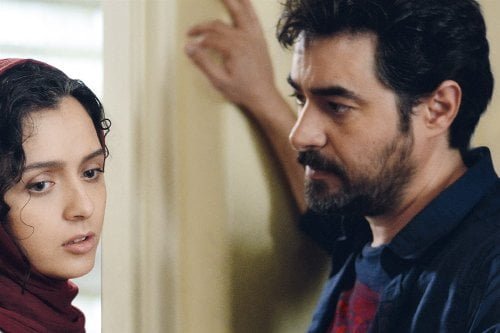 In a Tehran apartment building, Emad Etesami (Shahab Hosseini, "About Elly," "A Separation") is alerted to danger by the commotion of evacuation. He gets his wife, Rana (Taraneh Alidoosti, "About Elly," "Atomic Heart"), out before the structure fails. The stage manager of the play they are currently rehearsing, Babak (Babak Karimi, "A Separation," "The Past"), shows them a vacated apartment, but the previous tenant hasn't fully moved out and her past has violent and disturbing ramifications for the Etesamis' present in "The Salesman."

Iranian writer/director Asghar Farhadi's ("The Separation") latest analysis of a relationship plays off of Arthur Miller's 'The Death of a Salesman,' the play which the Etesamis' Iranian troupe is mounting. The film's relationship to the play is a broad one, the revelation of Rana's attacker more literal. It is the strain on the marriage that is the focus of Farhadi's movie, Rana experiencing emotional distress while Emad grows both suspicious of her and obsessed with finding the man who sexually attacked her. After Emad goes out to the store, Rana hears the buzzer and, assuming it is him, opens the door before getting into the shower. But when Emad goes up the stairs, he finds himself following a trail of blood that leads into his new bathroom. Neighbors have taken his wife to the hospital, an upstairs tenant conjecturing that Rana was attacked by a 'client' of the former tenant who had 'many male visitors.' Emad questions Rana, demanding to know why she let a stranger into their apartment. She explains and claims not to have seen the man's face. Upon return to their apartment, Rana no longer feels safe, but she refuses to go to the police, as, in Iran, this would be publicly admitting her shame. Emad finds a cell phone, cash and a set of keys which he traces to a pickup truck left on their street. Rana insists on returning to evening rehearsals (she plays Linda, the wife of Emad's Willy Loman), but she breaks down. Sanam (Mina Sadati), the woman playing Willy's mistress, asks if her young son Sadra (Sam Valipour) can go home with Rana. At first, Sadra's presence seems to ease tensions, the Etesamis having been thinking about starting a family, but when Rana tells Emad she paid for their meal with money from a wad of cash she found in a drawer, Emad blows up, throwing away the meal. When the pickup truck disappears, Emad begins to search for its owner. This winner of Best Actor and Best Screenplay at Cannes observes a couple who dance around a stressful event without ever verbalizing their innermost thoughts, beautifully realized in Farhadi's closing shot. Hosseini conveys Emad's genuine concern overtaken by damaged male pride, his wife's bruised face a constant reminder. Alidoosti retreats into a nervous shell, growing quieter as Hosseini grows louder. Her reluctance to talk may initially be attributable to shame, but Farhadi's climax reveals another, more charitable motive cowering in the face of Emad's rage. Social aspects of class, patriarchy and honor are also part and parcel of Farhadi's landscape. The structural breakdown of the Etesamis' apartment is clearly a metaphor, their new environment never completely their own. But as compelling as "The Salesman" can be, its central characters' failure to articulate their inner feelings leaves us without any real catharsis. It is a bit like going to the dentist for an aching tooth, only to have him recommend medication to dull the pain rather than yanking it out by its root. Grade: