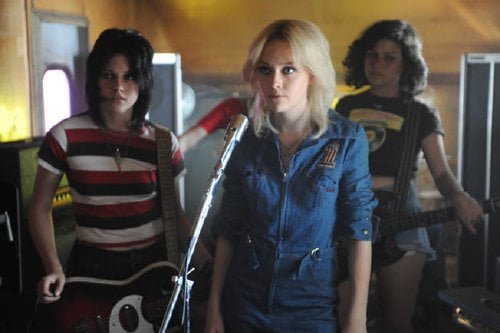 When Joan Jett (Kristen Stewart) met music producer Kim Fowley (Michael Shannon, "Revolutionary Road"), she told him she wanted to create an all-girl rock group. He introduced her to drummer Sandy West (Stella Maeve, "Brooklyn's Finest") right then and there. In 1976, before even a year had passed and the group had reconfigured itself several times, Mercury Records signed them and released the eponymous album "The Runaways."

Writer/director Floria Sigismondi, making her feature film debut after directing striking music videos for Marilyn Manson, David Bowie, Björk, The White Stripes among others, has clearly watched "Sid and Nancy" more than once, but she also adds a few of her own artistic flourishes onto an otherwise pretty standard rise and fall rock story. As this is adapted from Runaway lead singer Cherie Currie's (Dakota Fanning) book, she is the character with the arc (and the only one given a family back story), which is ironic because it is her decision to quit the band that plays false here. Still Sigismondi gets the squalor of being in a band and going on the road and the two leads are beautifully balanced as symbols of male (Jett) and female (Currie). Stewart, with her deeply shadowed eyes and slouchy attitude towards stardom already had some bad girl rocker cred going into this and she does Jett proud, but it's surprising to see Fanning fall so easily into the vamp tramp posing required to play Currie. As Fowley, Michael Shannon is a live wire, hilariously profane, a motivated manipulator and self promoter. While Maeve injects some real personality into the pic as West, Scout Taylor-Compton ("Rob Zombie's Halloween") is given a chance to make Lita Ford even register as the group's lead guitarist until one late hissy fit in the 'band falls apart' scene. Bassist Jackie Fox is replaced with a fictional character played by "Amreeka's" Alia Shawkat due to legal issues. Tatum O'Neal simply slays in just one scene as Cherie's self-obsessed actress mother. Sigismondi follows Joan Jett and Cherie Currie in two separate strands until the two cross paths. It's unclear where Jett lives and with whom, but she has a sapphic attraction to the friend she hangs with, sniffing glue and playing guitar. She scornfully rejects a high school music teacher who informs her that girls do not play the electric guitar and tells a vintage clothing store owner who tries to point her towards the women's section that she wants to dress like the black leather clad customer in front of her. Joan's into Suzi Quatro and Elvis. Meanwhile, the film's very first shot is a closeup shot of blood splattering on pavement, announcing Cherie Currie's initiation into womanhood. She has her sister Marie (Riley Keough) help her paint her face like David Bowie's Alladin Sane persona and defiantly lip synchs to "Lady Grinning Soul" as her tenth grade classmates heckle. She's the 'Bardot/Bowie' girl Fowley's been looking for to lead his band and he browbeats her into submission during an audition in a dilapidated trailer. ('Jail f*'n Bait, Jack f*'n Pot!' he cackles when he finds out she's only fifteen.) Cherie falls too hard for her sex kitten image, though, where the other girls are really there to rock and roll. Considering her distinctive music video work, Sigismondi doesn't stray too often from the straight-ahead biopic mold, but she does have a few nice moments. Her opening volley is definitely in your face and she uses red again for the seduction of Joan by Cherie in a roller skating rink, the color a romantic immersion. The band's tour to Japan, where they were very popular, is introduced with a transition shot from an airplane toilet flushing to the interior of a round tunnel. Notably, their departure is marked with their limo driving through a rectangular, coffin-shaped one. Joan's emergence as a leading presence is beautifully staged, her face and hands all that's visible in a milky bathtub as she crafts a lyric. If only she'd crafted the film to better support her climax. While we can deduce many reasons for Currie's decision, the film shows her as pretty besotted by her own image despite Fowley's manipulations. The film needed some reiteration, a buildup to bolster the blowup. "The Runaways" is still a neat little time capsule of a musical period when disco co-existed with The Sex Pistols and several new genres were being birthed. Half of the band has been given short shrift but Stewart and Fanning provide plenty of drama punctuated by Shannon's slippery Svengali.