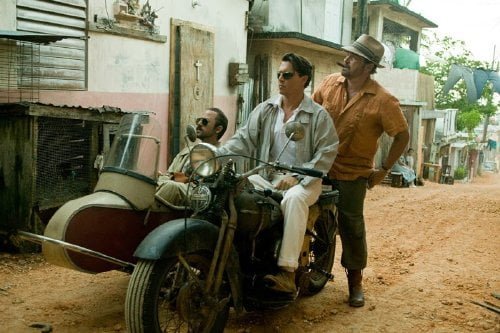 In 1960, Hunter S. Thompson traveled to Puerto Rico to write for the San Juan Star. He ended up at the unsuccessful sports magazine El Sportivo instead, but his adventures in the rum soaked culture inspired him to create an alter ego who did land that Star job, Paul Kemp (Johnny Depp), in "The Rum Diary."

Johnny Depp became a very close friend of the late gonzo journalist, portraying him in the autobiographical "Fear and Loathing in Las Vegas" and even financing his funeral after Thompson committed suicide in 2005. It was Depp who discovered this shelved manuscript and convinced Thompson to publish it. Now he stars in the film version. Of course Depp is now closing in on 50 and Thompson was 23 at the time of his Puerto Rican adventures, but Depp still pulls it off, using his pop-eyed naif schtick combined with an underdog's approach to romantic leading man that makes him appear greener than his years. We can see the genesis of the Hunter S. Thompson that became famous, seeded in an idealistic young man who nonetheless thrived in chaotic lost control as practiced by mentor Bob Sala (Michael Rispoli, 2009's "The Taking of Pelham 1 2 3"), the Star's staff photographer, and the legendary Moburg (Giovanni Ribisi, TV's 'Friends,' "Avatar"), an unwashed lunatic who only appears in daylight to pick up his paycheck. Kemp arrives for his interview with the Star's E.J. Lotterman (Richard Jenkins, "The Visitor," "Step Brothers") masked in aviator shades, confirming the editor's suspicion that he has another drinker on his hands. But as Kemp's his only applicant, he's hired with the admonishment to show enthusiasm for his work. He's sniffed out in the staff library by local businessman Sanderson (Aaron Eckhart, "The Dark Knight"), who hands him his card. And so Kemp observes the ugly dealings of Union Carbide and tourism development as locals riot in front of the paper which replaced them by automation, but is steered towards writing puff pieces by Lotterman and signed on by Sanderson to 'assimilate conflicting points of view.' He also becomes intoxicated by Sanderson's girl, the blond and bronzed Chenault (Amber Heard, "Pineapple Express"). These conflicts of interest take Kemp on a merry trail through dangerous encounters with locals previously treated disdainfully by Sanderson, the corrupt police and courthouse system, cockfights, carnivale and secret meetings on U.S. Army bases and with hermaphroditic voodoo docs. After Kemp milks his Star-paid hotel room dry ('166 miniatures?!' 'You mean they weren't complimentary?'), he lands in Sala's sublet of Moburg's room complete with Nazi propaganda, roll-of-the-die running water and binoculars for watching the neighbor's TV. When he's introduced to Sanderson's world, it's in a sprawling modern glass house that lets its private beach inside. "Withnail & I" director Bruce Robinson was coaxed out of retirement to adapt this project and he created a lot of hilarious dialogue and yet, despite the looney situations Kemp gets into, the film never soars. It ambles along, good naturedly, with the occasional over the top moment. One wonders if it is true that filters from the Barcardi plant can be milked for 360 proof rum. Robinson's cast coheres well considering how many pitches the performances take. Eckhart's almost doing a more realistic turn on Dark Knight's Harvey Dent, all smiles and joviality giving way to annoyance and vindictiveness. Rispoli's perfect as the seat-of-the-pants photographer with more than a going concern in fighting his roosters and, as usual, Ribisi will rub some the right and others the wrong way (I tended toward the former). Heard doesn't get to mine much depth, but she's sympathetic and sexy in a 50's Barbie doll kind of way. Jenkins is apoplectic or shifty, both done with flair. As Sanderson's client, Bill Smitrovich's ("Seven Pounds," TV's 'The Event') 'The Major' is a gung-ho Nixonian plunderer. The period production sparkles with its old cars, including a vintage 1958 red Corvette, and contrasting, transitional ways of life. "The Rum Diary" is sozzled through and though without ever getting in the groove of a true bender, but it's amply evident it was a labor of love.