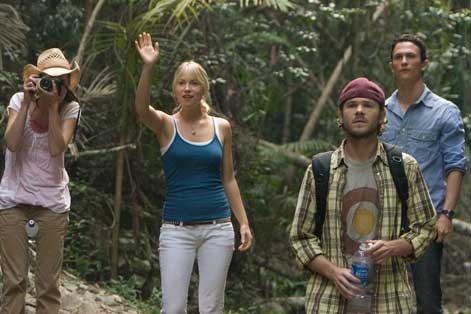 Two couples on a Caribbean holiday begin to chafe against each other with conflicting agendas, but as luck would have it, they've fallen in with other vacationers who offer diversions. Greek Dimitri (Dimitri Baveas) has caught flirtatious Stacy's (Laura Ramsey, "She's the Man," "The Covenant") eye while German Mathias (Joe Anderson, "Becoming Jane," "Across the Universe") is non-judgmental. When Mathias announces his concern that brother Heinrich has not returned from following a female archeologist into the jungle, the whole group decide to seek adventure at "The Ruins."

Well, that opener was written based on the book, not the movie, which did not screen until 10 p.m. the night before opening today. Scott B. Smith ("A Simple Plan") adapted his own novel for the film so it is truly perplexing why he chose to do a musical chairs routine with his characters - for all the well founded traits in his novel which provided the meat of the story when six people find themselves in dire circumstances cut off from civilization, Smith just seems to have taken the horror spikes from his book and thrown a character named dart at a storyboard dart board. Stacy flirts with Dmitri in the book? Amy comes on to Mathias in the movie. Dmitri is horribly injured in the novel? He's quickly dispatched and replaced with Mathias. Eric is obsessed with something getting under his skin in the book? Let girlfriend Stacy have that pleasure in the movie, all the better to show female (bloody) skin. If one hasn't read "The Ruins," it might not seem half bad as a horror flick. It's kind of like "Touristas" with a better cast, higher production values and a supernatural edge. The vines, with their creepy sound emulating blood red flowers, could have seemed silly in their translation from page to screen, but their pistil-vibrating vibes are pretty creepy and their roots do unsettle as they grab and grasp. Too bad the film's human characters are so one note. Everyone except Jeff (Jonathan Tucker, "The Deep End," "In the Valley of Elah"), the organizing controller of the group, is shed of their inner lives and motivations, and even Jeff's actions are mostly explained away by his background as a med student rather than his inclination to take charge. Amy (Jena Malone, "Donnie Darko," "Into the Wild") isn't so much negative as hung over in her objections to the expedition. The film hits all the novel's outer horror touch points, but director Carter Smith doesn't let them build so much as check them off a list that he's rushing through. Without the character motivation behind the reassigned actions, the film's more a series of gross-outs than anything actually horrifying. Worst of all, novelist Scott eschews his own strong finale and its coda for a standard 'last female standing' horror ending that cuts his capper off at the knees. As it stands, "The Ruins" is a slightly better than average horror flick, but it doesn't crawl into that nightmare place in your psyche the way it should. Director Smith's imbued his plants with more personality than the people they feed off of, addressing the book's most perplexing challenge while neglecting its essence.