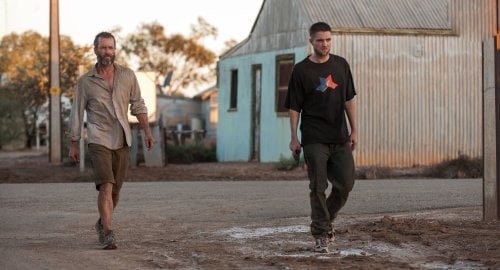 It has been 10 years since the world economy collapsed and a lone drifter is crossing the arid lands of Australia on a mission. On his way, his car is stolen by three thugs fleeing a shootout and he takes chase. He meets up with the wounded brother of one of the men he pursues and the two team together in “The Rover.”

10 years after a global economic collapse, rural Australia has turned into something resembling the Wild West. When a lone man (Guy Pearce, "Animal Kingdom") stops at an Asian cafe, he doesn't see or hear a group of criminals crash their truck outside, but he does see them taking off in his last possession, his car. Determined to retrieve it, he gets their truck on the road and along the way to hunting them down he picks up an unlikely partner, the left-for-dead brother of the gang's leader, in "The Rover." With his sophomore film, cowriter (with "The Square's" Joel Edgerton)/director David Michôd ("Animal Kingdom") has made a movie which can be read in several different ways. Some may find its ultimate reveal much ado about nothing, a long, violent road leading to a joke. Others will find deeper meaning about what we hold dear and how man's destructive impulses will find him obliterating the very thing he's sought. Even if one falls into the former camp (which I do not), "The Rover" features two indelible performances in a brutal landscape where one never knows what's obscured on the heat shimmered horizon. The opening set up features a great visual gag, as Pearce (his character name is Eric, although we never once hear his name uttered) sits plugged into his iPod while an overturned truck slides by outside engulfed in flames. From the onset we are left to wonder just why this man is so intent on recovering his beater, the truck left behind obviously more suited to the rugged terrain. He quickly catches up with the thieves, but they're armed and he's not, so he's forced to back down (one may also wonder why the trio don't just give this crazy guy his car back in return for their truck, but we'll attribute that to machismo and move on). The man stops in a small town dominated by the Jacobson Brothers Circus. He's directed to a genteel looking, tea sipping Grandma (Gillian Jones) who tells him the three passed through and to whom he refuses to give his name. (She also, chillingly, offers him a young boy, presumably the one he's just spoken to.) A dwarf shows him firearms for sale, but when he refuses to reduce his price, the man uses the dwarf's own product against him. Life is cheap in a land where power pole crucifixions line the roads. Then he finds Rey (Robert Pattinson (The "Twilight" series), bleeding from a bullet wound. The American Southerner is trying to make his way back to his older brother Henry (Scoot McNairy, "Non-Stop," AMC's 'Halt and Catch Fire'), the guy piloting Eric's car, and so the man takes him hostage, bringing trouble to the door of a doctor who agrees to patch Rey up. Rey is convinced his brother is waiting for him, and so leads the man towards Henry, but they've got additional fish to fry when a ragtag military bears down, intent on taking the two in. This is the second 2014 film which has reminded me of "Of Mice and Men," although the relationship in this one is inverted. All we need to do is look at Pearce and we can deduce this is a man with nothing left to lose, a bitter man of few words, at least until Rey begins to talk. Pattinson is terrific as Rey, a none too bright, twitchy character whom the star inhabits with no actorly tics. He's in pain, but hopeful, and as he's never known another life, takes things as they come. When he finally opens up in a slow, halting speech, we can see the deep thought required to communicate, but his captor counters Rey's goodness with cynical instruction. Still Rey persists (there is a phenomenal scene where Rey, alone in the truck, sings along to Keri Hilson's 'Pretty Girl Rock' with such solemnity it's moving) and Eric doesn't quite know what to make of it. Michôd's created a world where the American dollar still rules, but where shopkeepers huddle in fear amidst their paltry wares. Like the "Mad Max" films, gasoline is a highly priced commodity. Internal structure, like power, is haphazard. Some things, like the spotty military presence and why they're interested in our protagonists, are left unexplained, but this just contributes to the overall feeling of anarchy. Director of Photography Natasha Braier uses a palette of sun-bleached browns and greens beneath a colorless sky. When Eric is picked up by Sgt Rickofferson (Anthony Hayes, "Animal Kingdom") late in the game, we finally get part of his story. But his ultimate mission has only been hinted at in a prior scene which reverberates at the film's end. It's heavy with irony, a sad ending his own actions have forced him to live through twice.

The premise for “The Rover” is simple: the man, for reasons unknown, must get his car back and he will stop at nothing to do so. Guy Pearce gives gravitas to his role of a man of few words and intense resolve. You feel, through the man’s look and body language, that he has suffered great loss in his life and, because of this, has no fear. As he takes to the road to find his car and the bad guys who took it, he comes upon wounded Rey (Robert Pattinson) who promises to be his guide in his quest. Pattinson, sporting a deep southern drawl, really inhabits his character and garners sympathy as a man left behind by his brother, Henry (Scoot McNairy). This pairing of two very different people – Rey is mentally simple, the man is smart – makes for an odd kind of buddy road movie. Well, not exactly “buddy,” it is more like two men with a shared destination who bond during their journey. The bleak, arid landscape helps set the post-apocalyptic tone as the man stops at several way stations where the proprietors are heavily armed and distrustful of any strangers – and everyone is a stranger – coming into their stores. There is not much happiness to this unrelenting story but there is a very satisfying ending that makes you understand why the man was so relentless in finding his car. The finale is the one melancholy moment in an austere, violent story.