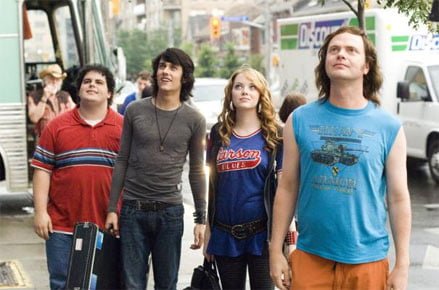 It is the 1980’s and the rock band Vesuvius is on the brink of a huge record deal and super stardom ­ but there is a problem: their egotistical drummer Robert Fish” Fishman (Rainn Wilson). If the band keeps him on it will kibosh the deal so it is a no brainer choice. They get rid of him. Now, 20 years later, Fish is in telemarketer hell and has no prospects until he hears that his nephew’s band needs a drummer. Fish sees this as his last chance to be the person he most wants to be, “The Rocker.”

In 1986, Robert 'Fish' Fishman (Rainn Wilson, "Juno," TV's "The Office") was poised to take his heavy metal band, Vesuvius, into the big time. There was only one problem - the record label president wanted the band to provide a slot for his nephew, a drummer. Fish's buddies dumped him and went on to become one of the biggest bands of all time while he ended up a lowly customer support rep. Twenty years later and Fish has hit rock bottom, losing his job, his girlfriend and his home but when he moves into his sister's attic he discovers his nephew Matt (Josh Gad, "21," TV's "Back to You") has a band that needs a drummer. Fish's dreams reawaken and reenergize his determination to become "The Rocker." In yet the umpteenth arrested development manchild comedy, Rainn Wilson lets his inner Jack Black out with a good dose of Will Ferrell style body barement and mines some laughs out of a largely forgettable film. Pop star Teddy Geiger has nice screen presence in his debut as the dreamy singer/songwriter of A.D.D., but "The Rocker" is unlikely to be a springboard to movie stardom. Director Peter Cattaneo has been in a free fall since scoring big with "The Full Monty." There's nothing wrong with his work here, but the material, written by "Seeing Other People" scribes Maya Forbes and Wallace Wolodarsky, consists of a few good ideas padded to the max. Setting the film in Cleveland with the Rock and Roll Hall of Fame a constant background reminder adds a good dose of personality. Fish hasn't seen his nephew in years and doesn't even get his name right, but a call for help comes at the right time. A.D.D. is slated to play the senior prom when they lose their drummer. As outlined by the band's bass player Amelia (Emma Stone, "Superbad"), they are representative of their audience demographic with the good-looking sensitive lead, Curtis, a geeky keyboard player (Matt), and herself as the punk rock art girl (see "American Teen" for a similar setup). Fish is the older, spastic drummer than gives them some wacky cred. But despite Fish's talent, when A.D.D. play the prom, he lets his demons out, taking over the show with extended solos that ruin the gig. He gets back in good graces by promising to find them a paying gig, but when he only can find one out of state they resort to stealing Fish's sis's (Jane Lynch, "For Your Consideration") car and get busted. Fish is thrown out and turns to Mr. Lee, who's profited on takeout for decades, and gets a corner of the hot, rodent infested House of Lee basement as a crash pad. Earning his Geek creds, Matt hooks up a 4-way webcam system that gives the grounded quartet a way to practice 'together.' When little sis sees the four way split screen, including a shot of Fish drumming naked, she posts it to YouTube and 'the naked drummer' becomes a phenom. Sleazy A&R guy David Marshall (SNL's Jason Sudeikis, "What Happens in Vegas") swoops in and A.D.D. get air play and a tour, but the band falls out once again when they're booked to open for this year's Rock and Roll Hall of Fame's inductee, none other than Vesuvius. There are the typical romantic angles (will Curtis notice Amelia behind the fresh crop of groupies? Will Matt find the voice to approach a fan? Will Curtis's mom (Christina Applegate, "Anchorman: The Legend of Ron Burgundy," TV's "Samantha Who?") fulfill the hot babe quotient for the doughy, adolescent, middle-aged star?) and conflicts of pairing two generations in a band (getting grounded, chaperoning) but little in the way of exploring the musical differences and experiences between Fish and his new bandmates. A.D.D. finds success way too easily, although the writers handily pull from fairly recent headlines for a satisfying climax. The cast helps make all this go down more smoothly than it might otherwise have. Wilson is doing his manic thing and his A.D.D. bandmates all carve out their respective niches. As is often the case with so-so comedy, more fun is to be had in smaller supporting roles. Jeff Garlin ("I Want Someone to Eat Cheese With," HBO's "Curb Your Enthusiasm") is terrific as Fish's brother-in-law Stan who lives vicariously through the irresponsible rocker. Also a hoot are the Vesuvius players, Will Arnett, Bradley Cooper and Fred Armisen, clueless and naive in the prologue, preening and British-accented for the climax. They're Spinal Tap lite. Applegate is solid as a 'cool' mom, but Jane Lynch is wasted laying down the law as Fish's humorless sister. "WRKP in Cincinnati" DJ Howard Hesseman cameos as A.D.D.'s tour bus driver. "The Rocker" is like a less mature, teenaged version of "School of Rock." The younger kids rocked harder.

Brit helmer Peter Cattaneo (“The Full Monty”) crosses the pond to bring us what had-to-be-imagined as a Jack Black vehicle, a la “School of Rock.” Well, Black’s career has taken a quantum leap since the latter film and Rainn Wilson steps in to take the role of the rock wannabe slacker, Fish. The result is a character that is less lovable and more cynical than Black would have played him. This is not a bad thing and Wilson’s participation helps this rags-to-riches rock fable. Fish’s ho hum life is about to turn around when his chunky teen nephew, Matt (Josh Gad), approaches him to join their band. A.D.D. is set to play at the senior prom and their drummer had to quit. Reluctantly, Matt, Curtis (Teddy Geiger) and Amelia (Emma Stone) accept the old adolescent and put their faith in his drumming skills. Old habits die hard for Fish, though, and he relives his old hedonism, to the chagrin of the teens and their parents. A fortuitous internet experience, when Curtis’s spiteful little sister YouTubes an online A.D.D. rehearsal (where clueless Fish appears butt naked), thrusts the band into web fame. A record company sees $$$ in the naked drummer hook and the band goes on tour ­ much to the dismay of the kids’ parents, including Curtis’s mom, Kim (Christina Applegate). But, Fish’s “rock star” antics and the band’s adventures on the road lead to an unexpected shot at fame. The young A.D.D. players do a decent job, but Wilson ­ still not really likable by the film’s end ­ evokes some sympathy as he displays his drumming talent onstage. The most amusing bit, though, is when Fish and A.D.D. meet Vesuvius, his betrayers of so long ago. Fish’s former band members, in their fame, have donned Brit accents and have a notably funny scene when they meet their old drummer. Rainn Wilson makes a good debut in his first starring role since gaining fame as “The Office’s” full of himself Dwight Schute. It is not a major leap from Dwight to Fish but the actor puts enough spin on his new face to make the character his own. The rock perf stagings are what they should be with Fish, at first living his perceived legend as a boozing, drug addled, womanizing rock star, given a dose of reality ­ to good effect for Wilson. Christina Applegate, as a mom, could have pulled it off as the older sister to Curtis, except for the responsible mother quotient Kim brings. The Rocker” is an amiable little film that covers familiar ground to entertaining ends. The finale is as expected but satisfying nonetheless.