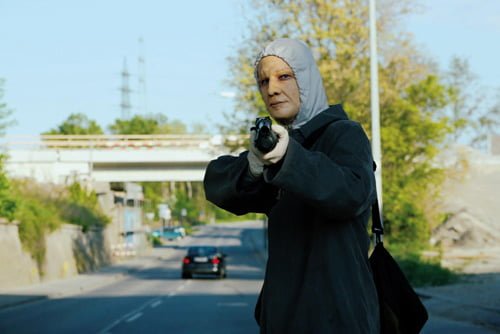 Johann Kastenberger (Andreas Lust) is a convicted bank robber doing time for his crime in an Austrian prison. While in the stir, he honed his running skills and has become a world class runner. When he is released from prison, he proves to be a champion and wins the Vienna Marathon. He also takes to his old ways as “The Robber.”

After six years in prison, Johann Rettenberger (Andreas Lust, "Revanche") seems to be rehabilitated. He spent his time training as a runner and shortly after being released, wins the Vienna City race. Johann (based on real life 1980's Austrian marathoner/bank robber Johann Kastenberger) not only assures, but guarantees his parole officer that he will never again meet him behind prison walls, but that just opens up thoughts about lethal consequences for "The Robber." Writer/director Benjamin Heisenberg (adapting the Martin Prinz novel) has created a very stylish film about a driven enigma. Here is a man with a girlfriend, Erika (Franziska Weisz, "Dog Days," "Hotel"), willing to take him back after a prison stint who could have had a comfortable life as an athlete. So why did he turn back to crime? Maybe bank robbery was his first love and running was a means of burning off the adrenaline rush, but "The Robber" isn't into analysis - it's a beautifully observed portrait of a cooly calculating man. The film begins slowly and builds steam - in fact, the whole is paced like a race, right down to its ending 'cool down.' We see some quick and unexceptional bank hits, Johann getting away by car (there's a gorgeous montage of different approaching horizons from a behind-the-dashboard point of view). The first big race is accompanied by tribal drums (composer Lorenz Dangel), which build to a pitch along with announcers breathless to tell his back story. The romantic relationship doesn't involve much in the way of conversation, Johann being the definition of the quiet type, but there is a communication. Cinematographer Reinhold Vorschneider shows the lovers in a lovely sepia toned chiaroscuro which, tellingly, obscures their faces in shadow. Later, at a movie, we see Johann and Erika watching the screen. Even without subtitles we can tell they're watching some kind of heist movie and that what's happening on screen is a bit silly, although not meant to be. Johann's attention turns to Erika's reaction and when she eventually laughs, he smiles a Mona Lisa smile. Later, a radio program will have the same effect on us as its host talks about masked revelers, Snow White in her coffin, dwarves and an antique motorcycle in front of a municipal building. Then Johann's exploits themselves are cranked up so far, they themselves invite the laughs. But Heisenberg's use of comedy is just part of the rush and his film takes a sharp turn that seals Johann's fate. This may be the first art house film that's literally fashioned as a 'roller coaster ride.' The film is stunning to look at - watch how a series of shots of Johann and Erika hanging their jackets on hooks in their hallway achieve a larger force as they punctuate the film - and the score is canny. Heisenberg and Lust may not allow us into Johann's head, but they do let us glide on his psyche.

This exciting true life thriller is told with artistic flare and brilliantly lensed camerawork by Reinhold Vorschneider that captures the marathons, slick bank robberies and Johann’s unexplained desire to rob banks. He is an enigma – he has the speed and stamina to make a very decent living from winning races (Kastenberger was called “The Fastest Man in Austria”). His mania for robbing banks – he would rob one bank then race across town on foot to rob another – is confusing, though, as he never spends the money. He just stuffs it into a plastic lawn bag and hides it under his bed, untouched. Johann commits his crimes with cold precision and he eschews contact with others, preferring to be a loner. That is, until he runs into Erika (Franziska Weisz), a young woman who was just a girl when he last saw her before he went to prison. They begin a tentative friendship as she invites him to move into her apartment – platonically. She falls for this strong, quiet man who tells nothing of his past or present. Soon, though, she puts the news items about the robberies together with the moniker bestowed upon the bank robber – The Running Robber – and figures out Johann’s secret life. This will have a resonating and tragic effect on their life. Besides the excellent cinematography that shows, from a bird’s eye view, the excitement of a major marathon and the sheer numbers involved. The same goes for the police chases, them in cars and Johann on foot, eluding them. The races, the chases and the robberies are accompanied by a bombastic drum score by Lorenz Dangel. The music adds tension to already tense scenes. The editing of the action, by Benjamin Heisenberg and Andrea Wagner, is fast and furious and further adds to the tension build up. Writer-director Benjamin Heisenberg, with Martin Prinz who wrote the novel on which “The Robber” is based, keeps Johann’s enigmatic life from supposition. Johann does not let people in to his life and is a blank cipher as to why he leads the life of a bank robber. It is not the money, Maybe it is the adrenalin punch he gets when he does his jobs or maybe it is just an unexplained obsession. The filmmaker leaves it for the viewer to decide, a refreshing change from Hollywood’s penchant to tell you all the reason for such a character’s motivation. “The Robber” is the remarkable story of an amazing enigma of a man who gives you no reason to be sympatric toward him but you do, in the end, anyway. If you are a fan of bank heist movies, this is a good one to add to your list of must see movies. This one, though, blazes its own path in the genre.