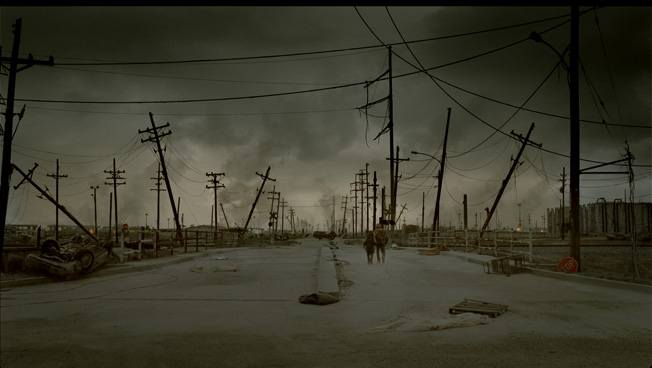 Man (Viggo Mortensen) and Boy (Kodi Smit-McPhee) are alone in a world destroyed by a planet-wide calamity. Their plan is to head south in hope of finding food, shelter and a home. However, they are not the only inhabitants left to survive and must make their way through wastelands and chance capture by roving bands of cannibals. The father and son, though, must face the dangers and cross these dangerous lands if they are to remain on “The Road.”

A man (Viggo Mortensen, "The Lord of the Rings" trilogy) awakens to witness an apocalyptic event unseen by the audience and instinct reminds him of essentials. 'Are you taking a bath?' his sleepy pregnant wife asks as he fills their tub with water. Years later he recalls the times before and after as he tries to protect his boy (Kodi Smit-McPhee, "Romulus, My Father") from the horror that is left of humanity as the head south along "The Road." Adaptations of Cormac McCarthy novels have ranged from the disappointing ("All the Pretty Horses") to the exquisite ("No Country for Old Men"), but "The Road," adapted by Joe Penhall ("Enduring Love") is a tough nut to crack and, unfortunately, director John Hillcoat ("The Proposition") hasn't been able to crack it. Primarily a story of keeping the spark of humanity alive when there is no hope, "The Road" is an interior novel that has been rendered on the screen with post apocalyptic drear and actors trying their damndest, but Hillcoat's episodic tale only strikes a real emotional chord once. With a very brief brush stroke, Hillcoat begins with a montage of what is about to be lost. In a rural setting abundant with flowers, a man and a woman (Charlize Theron, "Hancock") live in bliss with a horse in their meadow. One night changes everything. She no longer wants to bring their child into a world where cannibalism has become the biggest fear and food, the cold and shoes the biggest worry. Later, she no longer wants to live merely to survive and leaves her husband with their young boy. Going south towards the sea becomes their primary objective, if for no other reason than that the boy has never seen the ocean and it is unknown what remains at its coast. The boy, who has never known another world, is pure and innocent while the father is forced to be more pragmatic. In the first episode they encounter a truck full of men looking like something out of "Mad Max." Father and son hide in leaves, but a Gang Member (Garret Dillahunt, "The Last House on the Left") goes to relieve himself and spies them. After a standoff, the Man is forced to shoot, not only using up one of his last two bullets - their tickets out - but upsetting the Boy, who remains steadfastly kind. They manage to escape the Gang (and in a subtle touch, the Man notes his victim's head hidden beneath an abandoned vehicle, all that remains, waste not, want not). At the bottom of a pool where they wash, a rainbow, one of only two bits of color present in "The Road," briefly enlivens the screen before the two encounter perhaps their most horrific experience in an old Colonial farmhouse. The boy keeps begging reassurance from his father that they are the good guys, seeing as how they are often powerless to help others if they themselves should survive. After having tossed a picture of his wife off a bridge much earlier, the Man indulges himself in nostalgia, stopping at his childhood home, an act that makes the Boy wary. In the living room, he takes a cushion off the couch and when he turns it a miracle occurs - it glistens in all it's original color and pattern and in that one moment Hillcoat achieves what he fails to do for most of the rest of his film, makes an emotional connection. It's a stunning moment in an otherwise dreary trudge. The Boy will continue to push his father by making him share a meal with an old, nearly blind man (Robert Duvall, "Open Range," "Four Christmases"), lost hope personified, then by taking pity on The Thief (Michael Kenneth Williams, "Gone Baby Gone," "Miracle at St. Anna") who would have left them with nothing. The landscape these two journey through is burnt and gray and vandalized and almost devoid of life of any kind, "Zombieland" in black and white. Dialogue is sparse and although some of it really hits home, there's a lot of waiting and watching. The Boy is a Christ-like figure (the Man calls him his angel) who keeps a flicker of spirituality alive in his father. However, Hillcoat and Mortensen haven't unlocked the novel and the Man enough to externalize the inner thoughts which make both affecting.

Director John Hillcoat, with scripter Joe Penhall, brings Cormac McCarthy’s post-apocalypse novel to the big screen in a somber, sad tale of survival. Focusing on Man and Boy as they trek across an America devastated by an unnamed disaster, it is a story of using one’s wiles to overcome the frightening obstacles and endure. They have one narrow escape after another as they evade cannibals and procurers of human meat in a world where there is now little or no food. The film is unrelentingly bleak in its depiction of the rigors of survival, battling almost constant hunger and threats to life and limb for Man and Boy. Man sees it as his sole mission to protect Boy from all danger, saving the last two bullets of his gun in case he has to make the ultimate sacrifice. He also suffers from nightmares of his past life when he lived happily with his beautiful Wife (Charleze Theron), times that dramatically changed when the planetary calamity occurred. She gives birth, in despair after the apocalypse descended, to Boy and develops suicidal tendencies, forcing her to abandon her husband and son. This is not a hopeful road story where Man and Boy are afforded the kindness of strangers. With all hope gone, those left on the desolate, scorched world protect themselves and everyone else is the enemy – or food. This is a bleak film and director Hillcoat does s solid job depicting the horror that Man and Boy face, daily, with hunger and fear a way of life on the battered landscape. The wanderers do meet one person who poses no harm. Old Man (Robert Duvall) is nearly blind and has survived by his own wiles since the calamity happened. Man wants rid of him but Boy insists that they share their meager supplies and have a meal with Old Man, then part ways. There are tense moments and danger is constant, during their perilous journey, until they have a windfall that eases their plight and pain, if just for a short time. With few developed characters beyond Man and Boy, the burden of carrying “The Road” lands on the shoulders of Viggo Mortensen and young Kodi Smit-McPhee. Mortensen plays his role as a man living in unrelenting anguish. He is deeply troubled by his nightmares of his past life and the promise to Wife, before she left, that he would give his life to protect and save Boy. This makes for a one-note character but one, because of the actor, that garners your sympathy. It is a tough role well done. Young Smit-McPhee gives a serviceable performance of a boy whose entire life has been one of peril, bu with no knowledge or memory of the world his father had once known. The rest of the cast play cameo roles, only, but they are uniformly well done. Techs are superb, combining believable sets and production showing a now dead world with its barren, grey lands that offer no hope. Javier Aguirresarobe’s monochrome lensing adds to the look, accentuating the bleakness that shrouds the planet. There is a small twinkle of hope in the end but getting there is tough, relentless going – for Man and Boy, and me.