The Road to Guantanamo 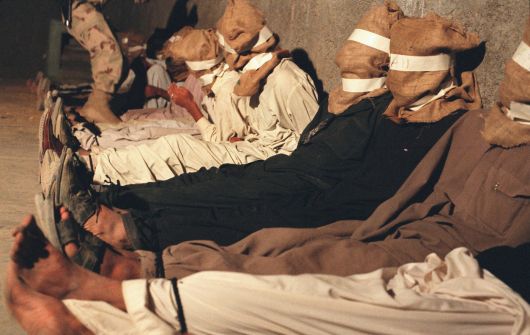 When nineteen year old Asif Iqbal's mother returned to the English suburb of Tipton from a trip to Pakistan in September 2001, she told him she had found him a bride. Asif rounded up a best man and set off immediately, but a chance meeting with an Imam seeking volunteers to aid Muslim Afghanis put him and his friends on "The Road to Guantanamo."

Director Michael Winterbottom ("Tristram Shandy: A Cock and Bull Story"), whose "9 Songs" editor Mat Whitecross also gets director credit, was the Silver Bear winner for this documentary recreation of the story of the 'Tipton Three,' but the film lacks the emotional impact of his earlier "In This World." The problem with "The Road to Guantanamo" is that its setup is muddled and its subjects' motivations befuddling. It works as a strong indictment of the United States' actions in Guantanamo, but it is far from Winterbottom's most compelling work. The story of the Tipton three has been well publicized, including an extensive article in Vanity Fair, but Winterbottom does little to elucidate it. He begins by throwing multiple characters at us in duplicate - the real men, who appear in talking head interviews, and the actors who play them in the dramatization of their words. By the time one has straightened out who is who, one of them, the shy and kindly Monir, is just about out of the picture (he is separated from his friends when they are taken to Konduz and is presumed to have been killed in a border bombing raid). Why the group decides to leave its carefree existence playing at beachside arcades in Karachi to hop a bus to a country that is beginning to be bombed by the U.S. in the days just after 9/11 is never made clear (unless one reads the press kit) and seems so downright foolhardy it loses most sympathy for the guys. Apparently they were trying to be good Muslims, but after being terrified by bombs and bored 'lying around' in Kabul, they decided to return to Pakistan. They never realized that the minivan they hired to take them back was traveling in the opposite direction, further towards the fighting, until it was too late. When Northern Alliance troops moved in, Asif, Ruhel, Shafiq and Shafiq's Pakistani cousin Zahid were rounded up with Afghani fighters and transported (in conditions so brutal many did not survive) to area prisons. A few months later, their heads are bagged in burlap and they're forced onto transport planes headed for Cuba. As the men describe their treatment, we see them in the dog cages of Camp X-Ray, where they are kept night and day without being allowed to talk, touch the sides of their containers or even stand up. They're brought out for incessant questioning sessions (Are you Al-Qaeda?), forced into stress positions for great lengths of time, intimidated by dogs, beaten and thrown into solitary confinement. Their religion is belittled, the Koran thrown into toilets. They are shackled with their feet between their hands in a crouching position in a dark room where they are subjected to loud music and flashing lights for hours on end. They are shown a laughably blurry video where they presumably can be seen in a crowd listing to Osama Bin Laden. In 2000. The fact that the boys had never left England until the following year eventually procures their release. In 2004. "The Road to Guantanamo" features vivid digital video imagery, but the dialogue among the lads is frequently difficult to make out (a problem which fades away with their imprisonment). In interviews, they say that they are changed, yet they have no real insights to offer and seem more numbed than anything else by the experience. Winterbottom's documentary will hopefully be a useful tool in ending the barbaric practices and injustices of Guantanamo Bay, but as a film it lacks the emotional hook essential to connecting the viewer with its horrors.

Camp Delta has become a synonym for oppression since its establishment shortly after 9/11. Since then, hundreds have been detained in the American-held section of Cuba without charge, sometimes for years. Filmmakers Michael Winterbottom and Mat Whitecross chronicle the lives of three of these inmates in a mix of documentary and drama in “The Road to Guantanamo.” In September of 2001, four friends – Ruhel (age 19), Asif (19), Shafiq (23) and Monir (22) - leave their home in the English Midlands city of Tipton an set off for a wedding and holiday in Pakistan. Once there, a local Imam in a mosque they visit convinces them to help their neighbors in Afghanistan by providing humanitarian aid. They cross the border on their mission of mercy but, instead helping refugees of the war against the Taliban, they arrive just as the Americans begin bombing Kandahar. They rush off to the capital, Kabul, as the bombs continue to drop and are cut off from escape back to Pakistan. Trapped in one of the last remaining Taliban strongholds, three of the friends (Monir went missing, never to be seen again) are captured by Northern Alliance troops and begin an epic journey that ends in the open steel cages of, first, the notorious Camp X-Ray then in the newly-constructed Camp Delta. They are interrogated by the military, the CIA and Britain’s security branch, MI5, tortured hundreds of times and accused of a myriad of offenses, including being seen in the presence of Osama Bin Laden. But, over two and a half years, none of the three were ever charged with any crimes. Winterbottom and Whitecross combine the dramatic recreation of these harrowing events with talking head interviews with the three real survivors of the ordeal. The mixing of interviews of these victims of despotism is well mated with the dramatic recreations but there is a sterility to “The Road to Guantanamo.” Winterbottom does it better with his earlier perilous journey film, “In This World,” (which Laura and I saw at the San Sebastian Film Festival without the benefit of subtitles and still got it), a movie that had more gut wrenching moments. “Guantanamo” is more chronicle of injustice than it is a tale of personal suffering. The filmmakers wear their hearts on their sleeves, leaving no doubt about their disgust over human rights in favor of misguided national security. One of the several messages given is the statement of the hypocrisy of both US (and British) military and government policy that randomly decides the guilt or innocence and takes no responsibility for the consequence of their actions. It doesn’t leave a warm and cozy feeling about our own constitutional rights. The Road to Guantanamo” is well-crafted filmmaking that appeals to the intellect without opening the heart. It has a there-for-the-grace-of-God-go-I feel that distances me from the plight of the three unfortunate central characters.