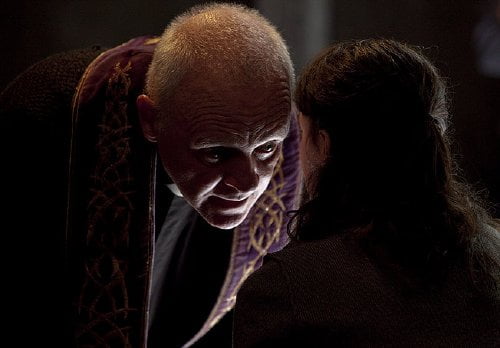 When Michael Kovak (Colin O'Donoghue) decides he doesn't have the faith to enter the priesthood, a horrible accident and the urging of his superior, Father Matthew (Toby Jones, "Infamous," "W."), persuade him to travel to the Vatican, which has decreed that each diocese in the United States will be appointed with an exorcist. Sensing his American student's skepticism, Father Xavier (Ciarán Hinds, "The Eclipse," "Life During Wartime") sends Michael to Father Lucas (Anthony Hopkins), where he will experience a first hand performance of "The Rite."

Film audiences are used to seeing films 'based on a true story,' but with "The Rite," we have a film 'Suggested by' Matt Baglio's 'The Rite: The Making of a Modern Exorcist,' which, of course, means they can take all sorts of sensationalistic liberties to stuff in the usual exorcism cliches. So why, then, has Warner Brothers chosen to cut off the movie's knees with a PG-13 rating? As directed by Mikael Håfström ("1408," "Derailed"), the film appears to have had its own exorcism, with critical ideas and images suggested which are never followed through on. Newcomer Colin O'Donoghue is a shallow lead and star Anthony Hopkins has whored out his Hannibal Lecter performance one time too many. We're introduced to Michael preparing the body of a suicide in the family funeral home. He is disturbed by the tattoo of a little red devil on the woman's arm and a silver charm bracelet he affixes to her wrist bodes bad things. We see flashbacks to the religious mother Michael lost at the age of twelve. Widowed dad Istvan Kovak (Rutger Hauer, "The Hitcher") is uncomfortably pushy about the dead with the young boy, including the corpse of his own mother. Having a few beers with buddy Eddie (Chris Marquette, "The Girl Next Door," "Life During Wartime"), Michael informs him of his decision to enter seminary school, despite flirtation with the local barmaid. He sees this as his only other option and is choosing the path as removal from the home front. Four years later, just after he's sent his withdrawal email, Father M chases him on a rainy street, slips into the path of an oncoming bicyclist who swerves into the path of an oncoming car. The scene plays like an intimate version of "Final Destination." Michael's ability to say the right things to the dying woman and his acing of psychology convinces Matthew that Michael is a prime candidate for exorcist. In Rome, we're treated to Xavier's slide show of demonic possession, but Michael questions often, drawing the attention of Angeline (Alice Braga, "Repo Men," "Predators"), a sexy journalist who's been allowed to take the course. Michael refuses to allow her to accompany him to see Lucas, an irreverent Welsh exorcist who gives Michael crash training when Rosaria (Marta Gastini) arrives for an appointment, even handing over the reins to take a phone call ('Pronto!') mid-rite. From here on in Michael follows Lucas with Xavier's eye toward making a believer out of him and Lucas alternately convinces and lets down his student. It will be no surprise who Michael must save as his final baptism into the domain of devil demolishers. Håfström's film is somewhat engaging as it lays down its premise. He maintains a sense of mystery about Michael's background and keeps a foot on either side of the Catholic exorcism debate for a time. Those in the demonic know will be unnerved by the large numbers of cats and toads on the grounds of Lucas's dwelling, representations of Ba'al, one of the seven demon princes of Hell. But he begins to lose his grip just when the film begins to build momentum. Rosaria's ultimate fate is mostly suggested, a shocking idea to those who even pick up on it that would have benefited from a visual, however fleeting. The death of Michael's father, predicted by the possessed Vincenzo (Andrea Calligari), also suggests many terribly evil things about the man then scatters any closure on that front to the winds. It's made even murkier when Michael begins to share the visions described by Vincenzo - has Michael been possessed? Who knows? Anthony Hopkins is really quite good as Lucas, employing an unsettling amount of humor cut with a forcible bluntness. The first evidence that he has been taken by the demon he's ousted is very well played, perhaps the only genuinely creepy moment in the film. The moment the possessed priest must play against his exorcist, however, he becomes Hannibal Lecter. It's all there, the cadence, the non-blinking stare. Also there is Braga's Angeline, presumably a stand-in for the book's author, but in practice to provide a source of sexual taunts. That rating intrudes again here, too, with Ba'al unable to utter an incendiary swear word or two. There have been worse exorcism movies over the years, but "The Rite" becomes muddled just when it should be coming into sharp and shocking focus. Despite some evidence of 'testing the unknowable,' it never really convinces of the case for demonic possession, although it does present a Catholic Church that isn't above blackmail.