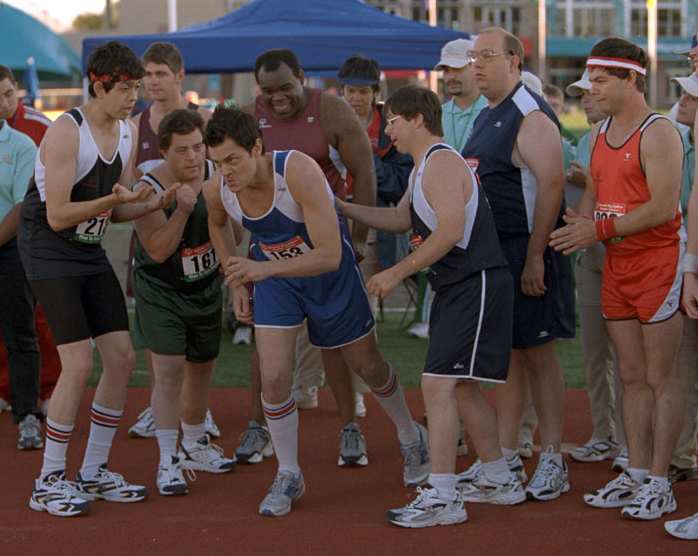 Steve Barker (Johnny Knoxville) just wants to do a good job when he asks his boss for more responsibility. He gets what he desires, a vice presidency, but there is a catch – his first task is to fire kindly janitor, Stavi (Luis Avalos). Good-hearted Steve can’t bring himself to ruin the man’s life and hires Stavi as his gardener. A freak lawnmower accident chops off three of Stavi’s fingers but, since he doesn’t have health insurance, they cannot be reattached unless Barker comes up with $28000. His unscrupulous gambler uncle Gary (Brian Cox) comes up with a plan to get the cash – Steve will become the mentally challenged Jeffy and win the gold in the Special Olympic games in “The Ringer.”

Brady Blackburn (Brady Jandreau) is an up and coming rodeo star when he's thrown from a bronco, the horse smashing through his skull. Recovering from the surgery to put a metal plate in his head, Brady tries to find a new life on South Dakota's Pine Ridge Indian Reservation. With his dad's gambling putting their trailer home in jeopardy, Brady, whose doctor has decreed 'no riding,' finds employment at DakotaMart and piecemeal jobs training horses, but he believes his purpose is on the back of a horse in "The Rider." When writer/director Chloé Zhao ("Songs My Brothers Taught Me") was making her first movie, she became enchanted with the Lakota cowboys living in the area and cast some of them in supporting roles. In 2015, she met Brady, a member of the Lower Brule Sioux Tribe, and in 2016, after his accident, Brady said something to Chloé which spawned this wondrous docudrama. Although it debuted at 2017's Cannes Film Festival, where it won the Directors’ Fortnight Art Cinema Award, this is the type of regional filmmaking that used to be a staple of the Sundance Film Festival back in the day. Brady is, in essence, searching for what it means to be a man. He is devoted to his younger, special needs sister Lilly (Lilly Jandreau), whose Asperger's Syndrome has stunted her emotional development, attacking a friend who's dared to twirl her about on a bar stool. He visits his mother's grave out on the plains. He curries Gus, the big veiny white steed he's loved for years. We can deduce his relationship with his friends has changed since his accident, cautiously sidestepping their macho lingo and carefree bravado. 'Your brain's a little different from your ribs,' he tells one who's urged him back into the saddle. There is great admiration for one of their own, their comments designating Lane (Lane Scott) to legendary status, but when Brady goes to visit his best friend, we're in for a shock. Lane is confined to a wheelchair in a medical facility, unable to speak, a tube protruding from his abdomen. Brady treats him with caring respect, sitting down to watch old VHS tapes of his friend's glory days as an eighteen year-old local rodeo star and ladies man. Brady's love for his friend is palpable. Brady's world is shaken again when he finds his father Wayne (Tim Jandreau) discussing Gus with another cowboy. The horse has been sold to pay down debts. Devastated, Brady gets up in the purplish pre-dawn light to say goodbye and he cannot resist mounting the steed one last time. We see Brady's world through his eyes, cinematographer Joshua James Richards ("God's Own Country") placing his camera behind the horse's head as it traverses the wide open land. Zhao closes the idyll with a shot of Brady's saddle sitting on the ground. On a job with Wayne, Brady notes a new horse tethered in a pen. No one's been able to break Apollo, he's told. As we've just witnessed Brady miraculously gain the trust of another unbreakable horse, we know the challenge is irresistible, but the young man cannot bring himself to pawn his saddle for the steed. Wayne surprises him and soon Brady's riding Apollo, but his doctor's words echo in our heads when he has to manually unfold his clenched fist to take the reins, then dismount to vomit. Zhao's beautiful film transports us to a world known by few, the romance of the American West as seen through the eyes of a young Native American respectful of the land, its creatures and everyone around him. But Brady's world is also one of tragedy and hardship, biological fragility taking its toll not only on Brady but those he loves, changing times curtailing his options. This man who evokes both the Marlboro man with his Stetson and roll-your-owns and the lonely decency of "Certain Women's" Lily Gladstone faces yet another loss and comes to a conclusion about God given purpose. If a horse is put down because it can no longer run, why should he, as a cowboy, continue to live if he cannot ride? I was conflicted over the film's ending, Brady embracing the romance of the past over the present responsibilities he's been man enough to accept. Still, we understand him, the beauty of his world undeniable. Grade:

The Farrelly brothers, Peter and Bobby, are renowned for their wacky comedies like “There’s Something About Mary” and “Dumb and Dumber.” They head down that path, once again, tackling taboos and confronting stereotypes as the producers of “The Ringer,” relinquishing helmer duties to first-timer feature director Barry W. Blaustein. Veteran television writer Ricky Blitt (“The Family Guy”) puts Steve Barker in a precarious position. His good intentions to help Stavi, a widow with four kids, turns bad when his new gardener lops off three of his fingers. Without insurance, the doctors refuse to reattach the digits unless Steve comes up with the dough – up front. Barker doesn’t have that much money and turns to his gambling-addict uncle Gary for help. But, Garry has his own fiscal woes, owing his bookie $40000. It looks like Stavi will remain fingerless when Gary, after watching a television interview with six-time Special Olympics gold medallist Jimmy Washington (Special Olympian Leonard Flowers), comes up with a plan. His nephew was a high school track star, years before, and Gary figures, with a little acting, Steve can pretend to be mentally challenged in order to enter and win the Special Olympics pentathlon. Gary intends to bet big on his ringer and make enough money to clear up his own debt and pay for Stavi’s operation. Desperate to do the right thing for the former janitor, Steve reluctantly agrees to the scam becomes Jeffy and registers for the games. This fish out of water story would seem to be an offense to the mentally challenged, in general, and to the Special Olympics, in particular. Ricky Blitt’s script, though, colors Steve as a genuinely nice guy who wants to do right by Stavi. He agrees to be a part of his uncle’s scam, studying films like “Rain Man,” and becomes Jeffy. Jeffy barely qualifies for the games and, to makes matters worse, is found out by some of the other athletes. But, it turns out that they are more concerned with having the arrogant Jimmy lose and they throw in with “Jeffy.” With the games just a week away, they put Steve through a grueling training regimen to make the ringer a winner. Endorsed by both the Special Olympics and the Downs Syndrome Society, “The Ringer” does all it can to put the Games and its players in the best light. Steve’s helpers, once they figure out that he’s a fake, become the real masterminds of the plot with their clandestine training sessions to make the ringer a winner. Steve, in turn, bonds with his new friends and falls for pretty Olympics volunteer, Lynn (Katherine Heigl). This mild-mannered, light comedy does all it can to not offend anyone with its politically correct stance on the handicapped. Mixing professional actors in with actual Special Olympics athletes as Steve’s supportive crew helps to defuse any comments the public might have over “The Ringer.” The filmmakers make the statement that just because a person is “normal” does not make him “better” than the mentally challenged athletes, a fact proven time and again to Steve. Johnny Knoxville plays Steve Barker as an honest guy who struggles constantly with his deception but does it to help his friend. The actor plays his dual role of normal Steve and challenged Jeffy with a sweet amiability. Mixing in a love story with Lynn is pretty run of the mill and it makes you wonder how they will tie that story thread up – they do, but in a trite, happily-ever-after way. Veteran actor Brian Cox takes on the role of the unscrupulous scam artist who doesn’t see anything wrong with his deceptive plan. Cox, with ever-present cigar stub stuck in his mouth, has fun with the role and makes his roguish Gary likable. Steve’s circle of friends, as I said, is made up of actors and S.O. athletes: Jed Rees (“Galaxy Quest”) is pentathlete Glen; Bill Chott (also “Galaxy Quest) is swimmer Thomas; Special Olympian Edward Barbanell is Steve’s roommate, Billy; Leonard Earl Howze (Barbershop 2) is muscular Mark; and, Geoffrey Arend (“Garden State”) is pessimistic Olympian Winston. Four-time Special Olympics World Games competitor Leonard Flowers plays the legendary Jimmy, the object of Jeffy’s crew’s disdain. Katherine Heigl sweetly plays the part of loving and lovable Lynn. The Ringer” is a goofy comedy that uses the self-effacing Steve to good effect as he struggles over his ruse. The positive light that bathes the film make it a likable little ditty that will entertain all and offend very few, indeed. The recent controversy sparked by the 2004 “South Park” TV episode – where Cartman pretends to be mentally challenged in order to take part, and win, the Special Olympic Games – will attract curiosity seekers and can only be a plus for the film at the box office. It’s not great filmmaking but is certainly likable and nice.