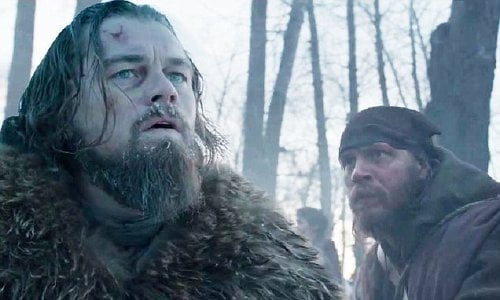 In 1823, a fur trapping expedition led by Captain Andrew Henry (Domhnall Gleeson, "Star Wars: The Force Awakens") was attacked by Arikara Indians, Warrior Elk Dog (Duane Howard, "Bury My Heart At Wounded Knee") searching for his kidnapped daughter Powaqa (Grace Dove). Having lost their hard won wares, the trappers decided to head back to Fort Kiowa over land. While hunting, Hugh Glass (Leonardo DiCaprio) surprised a grizzly with her cubs and was seriously mauled. John Fitzgerald (Tom Hardy) wanted to leave the dying man, but then volunteered to stay with him along with Jim Bridger (Will Poulter, "We’re The Millers") and Glass's half Pawnee son Hawk (Forrest Goodluck). But Fitzgerald's plan was betrayal. After having seen his son murdered, Glass miraculously survived against all odds, hell bent on revenge, becoming legendary as "The Revenant."

While cowriter (with Mark L. Smith, "Vacancy")/director Alejandro González Iñárritu ("Birdman") added some fictional elements, it should be noted that their adaptation of Michael Punke's novel is, for the most part, a true story. Hugh Glass was a real mountain man, left for dead after having been mauled by a bear, who crawled through the wilderness to get back to Fort Kiowa. In fact, "The Revenant" isn't even the first movie made about the man, the 1977 Richard Harris starrer "Man in the Wilderness" having been loosely based on his life. Iñárritu famously went for realism here, putting his cast and crew through all kinds of misery, but the end result is simply spectacular, something like the gorgeous naturalism of Malick's "The New World" crossed with "Jeremiah Johnson." DiCaprio may not have a lot of dialogue, but this is both a spiritual and physically demanding performance. When you watch the infamous bear attack, remember that the actor is working with something that isn't there (the bear is CGI). The opening Indian attack is brutal enough, traders felled left and right as the rest run panic stricken for their lives. The already shaken men are faced with making their way through unknown territory in an attempt to evade the Arikara. The grizzly attack is something out of an out and out horror film, the bear so realistic, Lubekzi's camera so close to the action DiCaprio's breath fogs his lens. And just when we think it's over, Glass attempts to shoot the bear, bringing on a second mauling. With skin flayed so severely we can see the man's ribs, Glass hears his fate discussed by his fellow trappers. We note Henry's hesitation, his distrust of Fitzgerald, but Glass's death appears so imminent, his son refusing to leave his side, that he agrees. But as soon as Bridger heads to the river, Fitzgerald takes matters into his own hands, slashing Hawk's throat in front of his anguished, helpless father. Glass is left in a grave, covered, ironically, with a bear pelt as Fitzgerald and Bridger set out to catch up with the others. Glass's journey will be one of tremendous pain and hardship, but also unforeseen kindnesses (in the form of an Indian healer) and grace in hallucinatory dreams. After crawling out of his grave, he forms a crude splint for a badly broken leg and, with no weapons, heads out in search of Fitzgerald. He'll suffer an involuntary ride over rapids, a buffalo stampede, hostile French traders and the Arikara again, all while traveling wounded over hundreds of miles. Henry is astonished when Glass reappears. The young Bridges is forgiven, but Glass sets out with Henry to bring down the duplicitous Fitzgerald, who fled at the first sign of the revenant. Glass and Fitzgerald's final showdown is brutal, yet even this scene is marked by the spiritual. These hirsute men, aided by hair, makeup and costume designers, feel like the real deal with their antiquated speech and hardscrabble lives. In addition to DiCaprio's focused intensity, Hardy's supporting turn is pivotal. Fitzgerald's harsh outlook ('I ain't got no life, all I gots is living') may blunt his villainy somewhat, but the actor isn't looking for redemption, his brutishness based on survival alone. He's the mama bear's selfishly driven male counterpart. Iñárritu may have had the crazy vision, but cinematographer Emmanuel “Chivo” Lubekzi, shooting with the Arri Alexa 65 in natural light, is almost his coauthor here. Using long, wide takes with a variety of lenses, the camera swoops and soars, providing a heady rush to the action, coming in close to reflect Glass's emotions. Ryuichi Sakamoto's ("The Last Emperor") score feels conjured by the majesty of nature. "The Revenant" is a harsh yet beautiful film and an unforgettable experience. Grade: