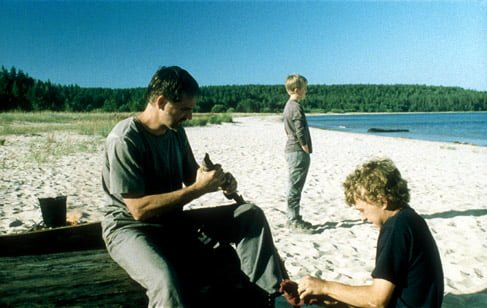 Young Vanya (Ivan Dobronravov) has spent almost his entire life without a father on the scene. He, his mother (Natalia Vdovina) and older brother Andrey (Vladimir Garin) have managed quite well, fatherless, for 12 years. When the boys return home one day, they are shocked to find a man in the house. The man, Mother explains, is Father (Konstantin Lavronenko), coming home to resume his place as family patriarch in “The Return.” Robin: Vanya, or Ivan as his father calls him, and his brother are initially thrilled to be reunited with the man they have known only from a faded photo. But, Father is awkward and strained with his new parental responsibilities and mishandles his efforts to insinuate himself back into the tiny family’s household. Mother, confused by her husband’s return, readily accepts the offer when he suggests bringing the boys on a fishing trip to help re-splice the severed family ties caused by Father’s unexplained disappearance years before. As the trio journey from one truck stop to the next, the boys are treated to increasingly erratic behavior as Father alternately tests, scolds and ignores them in an effort to establish his paternal authority. Andrey, who has more real memory of the man before he abandoned them, has the need to bond with his dad. Vanya, unhampered by memories has doubts about the man and a battle of wills begins between father and son. Young Ivan begins to spy on his father and sees that there may be some shady dealings going on. When they finally arrive at the lake for their fishing adventure, the power play between Father and his youngest son intensifies. Andrey sides with his father and a rift forms between the two brothers. Father patches up a rickety old boat and ferries them all to a small island only to cut the trip short as punishment for Vanya’s rebellion. As the conflict between the boy and his father escalates the undercurrent of violence comes to the surface and tragedy happens. First time filmmaker Andrey Zvyagintsev packs an emotional wallop with the screenplay by Vladimir Moiseenko and Alexander Novototsky. The basic story of the test of wills between Vanya and his father is given mystery with the ambiguity of the man returned home without explanation. The complexity of the emotions, moods and conflicts keeps you guessing right to the end of this beautifully crafted film. The writing, acting and direction are complemented with great artistic beauty by lenser Mikhail Kritchman whose eye for shot composition is among the best I have seen. Nearly every shot is made with a sense of painterly images that help belie the miniscule budget for “The Return.” Sound design, by Andrey Khudyakov, is beautifully handled throughout. Ivan Dobronravov, as Vanya, gives an astounding performance as he runs the gamut from ecstatic feelings when his father first arrives to suspicion of the man’s motives to outright confrontation. The young actor makes one of the most impressive debut performances I have seen, demonstrating the raw talent of, say, someone like Haley Joel Osment. If this kid lived in the US he’d be on magazine covers. Konstantin Lavronenko, as Father, provides a performance that is rich in mystery as you can only guess of his life for the past 12 years. There is a violent undercurrent in the man that shocks the viewer in its suddenness, such as when he strikes Andrey for some minor infraction. Vladimir Garin, who tragically died in a boating accident just prior to the film’s post-production completion, is overshadowed by his younger costar. “The Return” is a simple story, on the surface. But, as it unfolds, there is a complexity the goes beyond the battle of wills between father and son and opens up a very moving coming of age treatise, too. You don’t see films like this very often and that is a pity. I give it an A-.

Young Vanya (Ivan Dobronravov) has spent an afternoon enduring the taunts of older boys for his failure to jump off a diving platform the day before. When he and his older brother Andrei (Vladimir Garin) return home, they receive another jolt - the father (Konstantin Lavronenko) who left twelve years earlier has dropped back into their lives in "The Return." This winner of Best First Film and the Golden Lion from the 2003 Venice Film Festival is a startling debut. Director Andrey Zvyagintsev has a strong visual sense and an ear for unsettling sound that strengthen the feeling of foreboding pervading this psychological mystery. When Vanya fails to jump, he remains on the platform until dusk brings mother (Natalya Vdovina), who clambers up and takes him in her arms (just like Director of Photography Mikhail Krichman cradles the platform within its landscape in the frame). Mother falls silent, however, upon father's return. He simply takes his authoritative place. His first words are addressed to her at the dinner table - 'Pour them wine.' Andrei, impressed that his father owns an automobile, attempts to form a relationship, but Vanya is suspicious by the lack of affection the man shows to his boys. As promised, the next day father leaves with the two boys for a fishing trip, but a battle of wills ensues that ultimately leads to tragedy. When pressed as to the film's meaning, director Zvyagintsev replied 'I would say that it's about the metaphysical incarnation of the soul's movement from the Mother to the Father.' Writers Vladimir Moiseyenko and Aleksandr Novototsky place this burden on young Vanya, notably called Ivan by the father who treats him like an adult, rather than with the love and affection shown by his mother. Andrei, who presumably has outgrown mom's babying, gives his father the respect due an adult, but Ivan keeps testing the limits to see when they will break. When Andrei questions his father's drinking behind the wheel, the man turns it around on him with 'Yeah, want some?' Later Ivan observes his father watching a woman in the rear view mirror and his ultimate reaction is to board a bus to return to his mother. The father's disciplinary actions are given a sinister veneer as we are seeing them from Vanya's perspective, even though the man softens his stance every time he's challenged. When Vanya insists that their fishing trip not be sidelined by father's business, the boys's catch is shown - two largish specimens with mouths gaping for the water in a corner of a plastic bag. Dad doesn't participate, saying he doesn't eat fish, having had too much once (a shaded reference to the women in his life perhaps?), Even dad's license plate (109123AA) can be seen as a winding down preceding a new build. Zvyagintsev achieves the perfect balance of performing styles from his trio to serve this coming of age story. Lavronenko remains mysteriously detached until the film's final chapter. Vladimir Garin plays Andrei as cautiously accepting, the middle man between adult and child (tragically, Garin drowned during a boating trip before the film's premiere). Ivan Dobronravov is marvelous as the young boy demanding a father's love with clenched fists and jutting chin. The director and his cinematographer accentuate triangular shapes throughout the film. In addition to the obvious representation of the characters, there is the potential for religious symbolism which can be read into the film's climax as well. The photography is stunning, with a melancholy bluish light that makes the film appear to have been shot only at dawn or at dusk. Zvyagintsev uses sound creatively and subtly to add apprehension, such as a low industrial hum buried in the mix of a restaurant scene preceding one of the film's biggest confrontations. "The Return" ends with a series of still pictures, like family snapshots, where one can search for additional dimensions of the family dynamics. It's a thoughtful, thought-provoking film of quiet power.