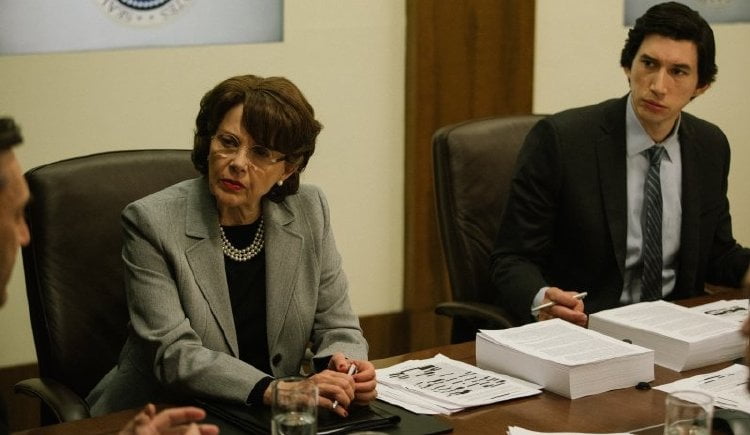 Following the chaos of 9/11, the US government-approved program for “enhanced interrogation techniques” was implemented and included such extreme tortures as water boarding, forced feeding, sleep deprivation and mock executions. All of this led to the investigation by the Senate Select Committee on Intelligence and “The Report.”

What began as the Intelligence Committee's Senator Dianne Feinstein's (Annette Bening, outfitted with the perfect wig and downturned mouth) estimate of one year to look into the C.I.A.’s use of ‘enhanced interrogation techniques' post 9/11 when it was learned they had destroyed 100 videos of same turned into seven for its lead investigator Daniel Jones (Adam Driver). Then came the battle to allow the American people to learn the contents of “The Report.”

Writer/director Scott Z. Burns paints Jones as a crusader for justice who not only had to face down the C.I.A. but also an Obama administration cautious not to appear to be ‘going after’ its predecessor. Cross cutting back and forth between the present dreary institutional settings of the U.S. government in Washington D.C. and the past horrors of unidentified black sites, where prisoners like Khaled Sheikh Muhammad (Ratnesh Dubey) literally suffered the effects of drowning during countless water boarding sessions and Afghani Gul Rahman died from hypothermia all set to ear-splitting heavy metal music, Burns creates atmospheres of hidden secrets, one light the other dark.

We witness psychologists James Mitchell (Douglas Hodge) and Bruce Jessen (T. Ryder Smith) who were paid $80 million by the C.I.A. for their 'enhanced interrogation techniques,' engage in double speak to counter accusations that their ‘special sauce’ was ineffective, something the C.I.A. had in fact recognized as far back as 1978 and which was reiterated in the C.I.A.’s own internal classified report by former C.I.A head Leon Panetta (the report which Jones ‘relocated’ to Senate Intelligence Committee computers to preserve). Those used to seeing former C.I.A. head (2013-2017) John Brennan (Ted Levine) trotted out on news shows to defend American values will see him here lying to protect his organization (Levine does a great job, getting Brennan’s odd vocal cadences down without mimicking him), denying that the C.I.A. had hacked Senate Intelligence Committee computers (they did). The F.B.I.’s Ali Soufan (Fajer Kaisi) is outraged when his detainee is transferred to the C.I.A. after having effectively gotten Intel using rapport. A quick jab is thrown at 2012’s “Zero Dark Thirty,” which promotes the idea that torture yielded results. What the C.I.A. did was so brutal that what was engineered by Dick Cheney and Donald Rumsfeld was kept from President Bush for four years (he was ‘uncomfortable’ when he heard about it).

Jones loses staff and fights on, wrestling with Obama’s Chief of Staff Denis McDonough (Jon Hamm), himself wrestling with the politics of bipartisanship, to get his report published. He resists the entreaties of a New York Times Reporter (Matthew Rhys), determined to go about it the right way. The report is redacted into obliteration. Then Feinstein gets the Department of Justice in her corner.

This might sound like dry stuff but Burns effectively builds his case with a cogent reminder of just why this matters. There is a distinctive sadistic streak evinced in Mitchell and Jessen and the men trained in their methods. Soufan got valuable information. They got misinformation and created Jihadists. America was left with a stain on its soul.

Dan Jones (Adam Driver), an investigator for the Senate committee, was given the daunting task to author a report on the CIA’s detention and interrogation program. That report, originally called The Torture Report, took four years to produce and another two before a summary of the 6700-page investigation document was released to Congress. During that time, the EIT program and the CIA’s efforts to cover up its horrors and the near total failure to effectively produce the promised, ground-shattering intelligence from the Iraq War II detainees began to come to light.

Writer-director Scott Z. Burns takes the years-spanning and complex story of an illegal CIA program of detention and torture and lies to the highest levels of the government and brings it to focused attention. Adam Driver gives an earnest performance as an investigator who uncovers the most heinous acts of torture – by Americans. Dan Jones is the tip of the investigative spear that, eventually and painfully, brought the secret and onerous CIA campaign to light.

Now, I understand that filmmakers will often take liberties on the details of a “true story.” But, the depiction of the so-called psychological “experts,” named Mitchell (Douglas Hodge) and Jessen (T. Ryder Smith), who apparently knew next to nothing about psychological and physical torture and even less on Muslim culture, is chillingly believable. Needless to say, the investigation uncovered the litany of horrors perpetuated under the cloak of “national security.”

The star studded cast, led ably by Adam Driver, really gives a realistic and genuine tone to the gravity of the scandal, cover-up and exposure. Annette Bening plays Senator Dianne Feinstein with dignity and aptly depicts the senior politician’s dedication to her office and the American people. John Brennan, as played by Ted Levine, does not come off too pretty in his portrayal of the former CIA chief and the Extended Interrogation Techniques implementation and cover-up.

The filmmakers give depth to the story of the investigation, evoking the feeling, in me, of the injustices perpetrated for the sake of expedience and not for cause. Many suffered needlessly at the hands of the amateurs who took the reins from the intelligence professionals, making for a low point in our country’s history and integrity.

The story is done in a series of flashbacks, to the torture days (vividly and hauntingly depicted) and flash forwards to the years of the investigation, making for a near epic tome of a heinous CIA program and its cover-up and the dedicated investigators that brought it to light.