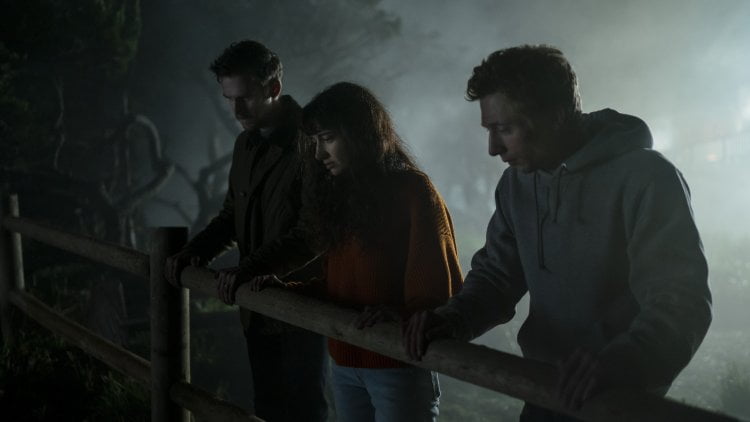 ‘Wow’ Mina (Sheila Vand, "A Girl Walks Home Alone at Night") exclaims, hanging onto Charlie’s ("Eurovision" scene stealer Dan Stevens) shoulder from behind as they both view something on his computer screen.  Their delight is briefly curtailed by a bout of sticker shock, but ‘F’ it, we deserve it.’  Mina abandons her intimate posture when Josh (Jeremy Allen White, TV's 'Shameless') walks in, offering her a ride home off his Lyft clock.  When he asks what they’re looking at, Charlie surprises us by stating they were thinking of a weekend for ‘the four of us’ at “The Rental.”

Cowriter (with Mumblecore's Joe Swanberg)/director Dave Franco makes a strong directorial feature debut with a relationship drama hung upon the frame of the horror genre.  And it’s a twist on that genre as well, a modernization of the old 80’s slasher formula that preys upon our fears of losing privacy with today’s ever present surveillance cameras and social media.  The film’s weak point is the connectivity between these two aspects, the killer’s motivations too worked into the unfolding relationship drama to withstand psychological scrutiny considering his crimes’ apparent randomness.  When the killing starts, the film loses its mojo.

The film opens with an establishing shot of that rental house, a lone, modern, oversized manse with windows overlooking the ocean from atop its perch on a rocky cliff face, interior views morphing into the still photos of a rental listing on Charlie’s screen.  After that initial relationship misdirection, we will learn that Charlie and Mina are work partners celebrating the closing of a major project.  Josh is Charlie’s brother, an ex-con (a serious assault during college) and general screw up who’s recently righted himself and is, much to his own astonishment, dating Mina.  Charlie is married to Michelle (Franco's wife, Alison Brie), a type A personality surprised to find herself looking forward to a weekend with her brother-in-law.

They don’t get off to a great start, Charlie upset that Josh is bringing along his pug Reggie, dogs forbidden in their rental agreement.  Mina is already finding fault with the owner, believing she was discriminated against when she couldn’t secure the reservation under her last name, Mahoumadi, while Charlie easily could.  Hiding Reggie upon their arrival, sure enough their ‘host,’ Taylor (Toby Huss, AMC's 'Halt and Catch Fire'), is antagonistic about their late arrival and spars with Mina.  ‘You own the place?’ she asks somewhat incredulously before backing down with ‘I didn’t mean anything by it.’  Upon introductions by Charlie, that exchange will be reversed when he asks her ‘How’d you end up with this family?,’ countering with a smirking spin on her own insincere apology.  Anxious to be rid of him, Michele steps in it by mentioning how ideal the spot would be for a telescope.  Taylor promises to drop his own off later.

A walk on the beach finds the couples swapped, Josh telling Michele he’s afraid of losing Mina, Michele assuring him she’s happy Charlie and Mina share their creative endeavors (yet seeming to be convincing herself).  Back at the house, Mina’s creeped out to discover Taylor dropped in during their absence, a telescope now prominent.  Michele surprises the group with Ecstasy, then begs out on joining in as long as the threesome saves some for the following evening.  The next morning, all are hung over, two guilty of cheating and Michele’s not thrilled only Josh takes her up on her planned hike.  Michele will be even angrier come evening when no one wants to repeat the prior night’s hedonism and she’s about to find out something Charlie and Mina know is out there after Mina discovered a camera in a showerhead.

The cast is solid, the couples’ ensemble all playing their tics of guilt, suspicion, aggression, self doubt, risk and caution to just the right degrees.  Huss crosses lines then sneakily jumps back over them, treading that line between guilt and innocence.  Franco’s direction is strong in setting up scenes, building tension and genuflecting to genre conventions (the slasher point of view shot of folks behaving titillatingly and the white masked killer emerging from shadow of “Halloween;’ the woman running from danger with injured ankle à la “The Texas Chainsaw Massacre”).  Music by "The Lodge's" Danny Bensi and Saunder Jurriaans’ is a simple, anxiety inducing drumbeat.

The film could have been stronger with a little more script tweaking, though.  In addition to the killer’s motivation, undo attention is given to a keypad locked door beneath the back deck’s lattice work skirting, one which is eventually opened by a laughably deployed kick and which offers little payoff.  Kudos, though, to the effective and surprising use of Reggie.  And that killer’s motivation just might come into more focus in “The Rental 2,” promised in the film’s final moments.

Two brothers, Charlie (Dan Stevens) and Josh (Jeremy Allen White), and their significant others, Michelle (Alison Brie) and Mina (Sheila Vand), plan a celebratory weekend at a swanky and remote airBnB home. But, the idyllic getaway goes terribly wrong on all levels in “The Rental.”

This is Dave Franco’s directorial debut and, as many first time directors do, brings us a psychological horror thriller that, despite the cliché material – co-written by Franco and Joe Swanberg from a story by Mike Demski – has its share of creepiness. Unfortunately, the psychological part of the thriller turns into a monster movie at about the ¾ point and loses its edge.

The story starts as business partners, Charlie and Mina, look over a virtual tour of the title property and it looks great. They are celebrating a big deal for their two-person company and they, with Mina’s Josh and Charlie’s Michelle, book the property – though, when Mina tried to rent it, she was denied but, an hour later, Charlie booked it with no problem.

When they arrive at the gorgeous manse on the coast, they are greeted, somewhat abruptly and creepily, by Taylor (Toby Huss), who immediately makes an ethnic slur about Mina being “with them.” – her white companions. When Taylor offers the use of a telescope – again with a slur, this time about city folk – her suspicions go into high gear when it shows up inside the house, not on the porch. This sets the film’s tensions as things like hidden cameras are discovered, ramping up the creepy quotient.

But, when the monster movie kicks in, it takes on a “Halloween” or “Friday the Thirteenth” vibe, shutting down the thriller portion to one of survival against a vaguely faceless fiend. I like the film up to this point, and then it devolves into a sameness of many other monster movies.

The tiny ensemble cast fills their characters well as the business partners, after an evening of booze and doing Molly, become intimate. The tension ramps up when Mina finds a camera hidden in a shower head where the intimacy took place. Mina wants to go to the police immediately but Charlie, afraid for his own skin and Michelle, wants to just drop the whole thing and leave, giving us the conflict and what transpires.

There are not a lot of surprises in “The Rental,” but tyro helmer Dave Franco does a solid, if not well-imagined, job in telling a story. The actors are all likable but Sheila Vand stands a head above the rest as the voice of reason in the tale.

For information about where to see "The Rental" click here.