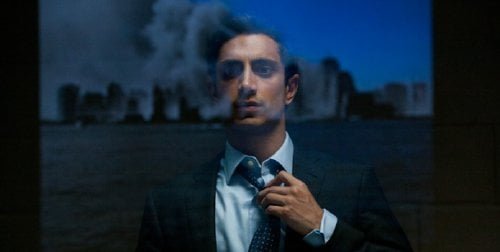 Lahore 2011. An American professor at the local university is snatched and journalist Bobby Lincoln (Liev Schreiber, "Goon") meets secretly with his Muslim colleague Changez Khan (Riz Ahmed, "Four Lions"), looking for a lead. It is clear Khan is under suspicion and so he asks Bobby to take the time to really listen to his story, going back to his days as a Princeton Graduate and corporate raider, before 9/11 changed everything and he became regarded as "The Reluctant Fundamentalist."

Indian director Mira Nair ("Monsoon Wedding," "The Namesake"), who tackled the post 9/11 Muslim POV before with her segment of the 2002 "September 11" omnibus, goes a step further with a Pakistani protagonist who embraces the West only to be betrayed by it. The film is about shifting perceptions and how fear of unknown cultures spirals into violence. It arrives in Boston just as the debate on ethnic profiling has raised its head again in the wake of the Marathon bombings. Ten years earlier, Changez is taken under the wing of Underwood Samson managing director Jim Cross (Kiefer Sutherland, TV's '24'), who sees his own ambition in the young man. The kid's a star, gifted with intelligence and outside-the-box analytical capabilities. Changez also catches the eye of artist Erica (Kate Hudson, "Bride Wars"), who turns out to be the niece of Underwood Samson's CEO. Then, in a Manila hotel room on business, Changez turns on his TV just in time to see the second tower hit live on 'The Today Show.' Returning to the States, Changez is pulled aside and strip searched, despite Jim's attempts to clarify. Erica seems to take the news in stride. There's a false arrest, followed by Erica's art show, which she sees as celebrating their relationship, but which Changez sees as xenophobic opportunism. The film isn't only looking at fundamentalism from a religious viewpoint though. A trip home for his sister Bina's (Meesha Shafi) wedding causes a rift with his proud father Abu (Om Puri, "East Is East"), a famous poet, when Changez reveals he paid for most of it despite a promise to his mother Ammi (Shabana Azmi, "City of Joy") to keep this secret. A trip with Jim to Istanbul to review a publishing company is the final straw - Changez never knew his father's work had been translated into Turkish and now he's asked to obliterate the company responsible. William Wheeler's ("The Hoax") adaptation of the Mohsin Hamid novel takes a conversation between two men and depicts the discussed events and ideas. Nair adds a thriller element by shifting back and forth between Changez's story and the escalating hysteria in the present time, all the while making us question Changez's part in it. The frustrating thing is, that ends up getting lost in the shuffle. Changez's experiences in the U.S. are too on the nose, too predictable, while his present life is left too ambiguous. Just what is he teaching University students - the Pakistani 'Dream' as idealistic citizens? The movie is still thought provoking in its attempt to tie the fundamental rules of Capitalism with Jihadism and Ahmed gives an intense performance. He's riveting when he describes his excitement at seeing an arrogant power laid low. Hudson once again proves herself effective when taken out of her typically awful romcoms. Schreiber is the face of a U.S. trying to be open-minded, yet unable to overcome distrust. Sutherland gives a strangely compelling turn, his posture so erect it's eerie, his walk like that of a runway model, but the point being made with a late reveal about his character is questionable. Also good is Nelsan Ellis of HBO's 'True Blood' as a college buddy and colleague of Changez's, but Martin Donovan is wasted in his role as a C.I.A. operative. Puri, Azmi and Shafi's support all add to Changez's makeup. If some of the film's themes are muddied, the dialogue is often sharp. The lyrics to Sufi music, invigoratingly incorporated, also further ideas ('I don't want this kingdom. All I want is a grain of respect.')