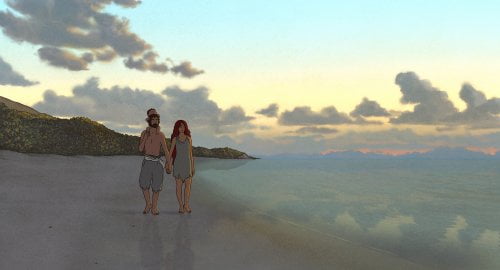 A man ship wrecked on a desert island grows increasingly frustrated when one raft after another which he builds is destroyed. He builds an even bigger one, but a sea creature attacks it, landing him and it on the beach. The man takes revenge on the creature, but gradually relents, and in so doing, learns about the cycle of life and man's relationship to nature in the form of "The Red Turtle."

Cowriter (with Pascale Ferran)/director Michael Dudok de Wit's (2001's Best Animated Short, "Father and Daughter") film is stunning to look at, a combination of digital and hand drawn animation which reflects both the beauty and cruelty of nature and man's place within it. But while his simple fable, in which a red haired woman emerges from the turtle's shell, would have made an entrancing short, it feels unduly stretched out to achieve a feature length running time, even at 80 minutes. Dudok de Wit uses no dialogue to tell his tale of man coexisting with nature. At first we witness the man's struggles. He has trouble obtaining food and difficulty traversing some of the island's rocky coast. When the majestic red turtle lands on his beach, the man overturns it in a fit of pique. But its struggles in the sand reach his humanity. When he cannot right it, he sleeps by it. The next morning its shell cracks and a woman emerges. The child they eventually have plays with the creatures - fish, crabs and birds - that inhabit the island, but Dudok de Wit isn't just giving us sweet images. We see how these creatures feed upon one another. As the boy grows he begins to retrace his father's steps, a parallel cycle of life. The human figures and turtle were animated using a digital pen while the backgrounds were created by charcoal on paper resulting in an overall hand drawn look. Despite the turtle's red hue, colors are natural, often muted. A tsunami is impressive, not only in its furious rendering but in the devastation it leaves behind. Laurent Perez del Mar's score uses piano, cello, the human voice and natural elements, like bamboo leaves, but Dudok de Wit also uses silence and the sounds of nature. Grade: