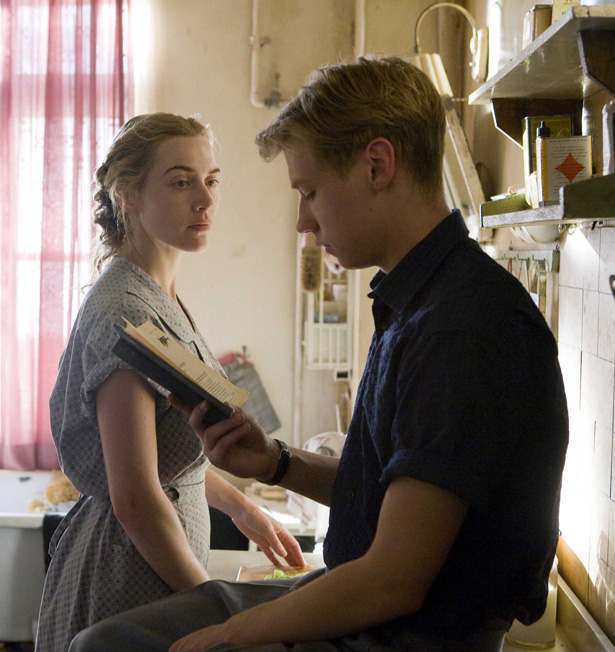 15-Year old Michael Berg (David Kross) is on his way home from school in the pouring rain when he falls ill. He collapses in an alley and a woman, Hanna Schmitz (Kate Winslet), shows him kindness and helps the teen. It turns out he contracted scarlet fever and is bed-ridden for weeks. He belatedly returns to thank Hanna and an April/July romance begins in “The Reader.”

In 1958 post-War Germany, fifteen year-old Michael Berg (David Kross) becomes ill on his way home from school and is helped by a beautiful thirtyish woman who walks him home. After recovering from scarlet fever several months later, Michael returns to the woman's apartment block to thank her, but runs when he is caught watching her put on her stockings. Returning yet again, Michael is astonished to be taken into the bed of Hanna Schmitz (Kate Winslet, "Little Children") and an intense love affair blooms as Hanna casts Michael in the role of "The Reader." Director Stephen Daldry and his "The Hours" writer David Hare adapt Bernhard Schlink's international best seller for the screen and while they lovingly recreate the central love story and the intergenerational moral complexity introduced eight years later, the present day bookending device is unnecessarily complicated by the emphasis on Michael Berg's daughter and Fiennes's overly restrained performance dulls the emotional impact of its conclusion. Kate Winslet is the essence of the character from Schlink's pages and young David Kross gives a breakout performance in a film that is gloriously photographed by cinematographers Roger Deakins ("Doubt") and Chris Menges ("The Three Burials of Melquiades Estrada"). When Michael reappears, Hannah, a rather closed, severe woman, informs him that there are two more coal hods like the ones she carried needing to be brought upstairs. In the cellar coal bin, Michael's shovel sparks a mini-avalanche and Hannah is highly amused as the blackened boy who arrives on her doorstep. A bath gives her the opportunity to reciprocate the boy's earlier discretion, and when she appears with a towel, she is naked. Pillow talk conversation turns to school and when Michael offers to lend her the book she shows interest in, she says she'd rather he read to her. And so begins an after school ritual that mutates from sex and reading to reading followed by sex. Michael is so besotted, he ignores pretty classmate Sophie (Vijessna Ferkic) and sells his beloved stamp collection to fund a bicycling trip with Hannah. But one day, she disappears. We've been given hints as to why, but none that Michael have recognized. Eight years later he is a law student in Heidelberg where Professor Rohl (Bruno Ganz, "Wings of Desire," "Youth Without Youth") has arranged for students to attend the trial of six concentration camp guards, recently identified by the publication of a book by a Holocaust survivor. Michael is shocked to see Hannah Schmitz among them. Schlink's novel was both an illustration of the WWII German generation and the one that followed trying to come to turns with each other and a morally complex tale that can elicit 'there but for the grace of God' reactions given the secret that shames Hannah into corners. Winslet, who is unfairly being pushed into Supporting Actress consideration for this role so as not to complete with her own "Revolutionary Road" performance, does amazing work here on many levels. She convinces of lower class Germanic heritage with her healthy figure, blond braids and untamed eyebrows as well as her brusque movements and way of speaking, but, more importantly, she is able to project an honest simplicity and love of art (just look at her face when she turns to Michael upon listening to a Church choir, a scene which has emotional repercussions later during testimony) that keeps us invested in her character's fate even while deploring her actions. Kross, who turned eighteen during filming, is convincing as a fifteen year old precocious enough to hold the interest of a beautiful woman twice his age while growing in confidence doing so (the actor is made to look eight years older with a simple change of hair styling that works wonders). Fiennes, however, assumes the middle-aged Michael as a repressed, unemotional man. A scene in which he attempts to explain to the woman who wrote the book that brought Hannah to trial (Alexandra Maria Lara, "Downfall," "Control" in 1966, Lena Olin, "Casanova," with Fiennes) shows a little life, but too late (Olin, however, nails the scene). Ganz's role is the pivot between the war generation and its children, explaining to his students 'The question isn't was it wrong, but was it legal.' His professor observes the divergent reactions among his students, raises the right questions and remains sensitive. The production is beautiful, maintaining period detail through three distinct time periods. The original score by Nico Muhly ("Joshua") is lush and moving - one of the year's best. "The Reader" hasn't been flawlessly adapted from the page, but the film is sure to inspire just as much debate as its source. Winslet's Hannah Schmitz is unforgettable.

Michael quickly becomes enamored by Hanna, spending every spare minute in her arms. She asks him about his studies and he tells her about his passion for reading. He offers to lend her one of his favorite books but she declines, asking him to read to her instead. A pattern settles in on their relationship ­ first they make love, then he reads. They live an idyllic time until, one day, Hanna disappears without a trace, leaving Michael heartbroken and bewildered. Years pass and Michael becomes a law student who, with his professor and fellow students, attends the last of the Nazi war crimes trials. He is shocked, when the defendants file into the courtroom, to see Hanna in their midst. As the trial gets under way, Michael learns of Hanna’s dark secret that brought her to this terrible ordeal. His realization will have profound impact on them both. Director Stephen Daldry gives us another solid hit his third time at bat. His first two films, “Billy Eliot” and “The Hours,” were a one-two punch and an assured debut for the helmer. He continues to evolve and “The Reader” is a fine addition in this evolution. The story opens in the 1950s and unfolds slowly, with the passion between Michael and Hanna building to an abruptly halted crescendo. It shifts gears when it jumps ahead 8 years and we see the events triggered by Hanna’s secret. This is a true two-hander dominated by Winslet and Kross as the star-crossed lovers. Ralph Fiennes has a small role as the older Michael but he is just bookending for the film and its eventual redemption for Hanna. This is Kate’s and David Kross’s (my candidate for best young actor this year) film and works best when the camera is on this beautifully lit couple. Kudos go to co-cinematographers Roger Deakins and Chris Menges for their expert shared lensing jobs. Other techs are equally fine with good attention to period detail. Scripter David Hare’s adaptation is so beautifully crafted, it makes me want to read the book. This might be a rare case where the film surpasses the source material by Bernhard Schlink. We’ll see.